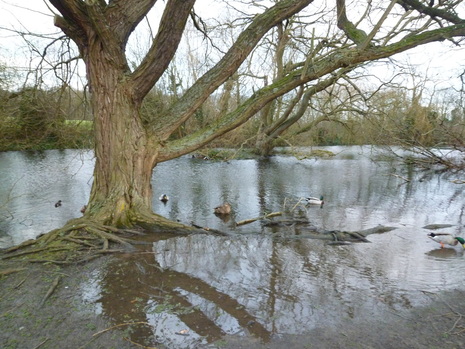 ​          Today I've started a new walk.  I've chosen the Capital Ring path in the hope of escaping the muddy paths and quagmires I've recently encountered in the countryside and on riverside rambles.
So I set off on this overcast but dry and mild Sunday morning to the start of the walk at Woolwich Arsenal. The journey took nearly three hours (bike, train, tube, train again) but this didn't bother me as it gave me a chance to read. I'd started re-reading 'To Kill a Mocking Bird' several weeks ago when Harper Lee published a sequel. A couple of days ago Harper Lee passed away aged 89 and this gave me a new impetus to actually get on with reading the novel.
I arrived at Woolwich Arsenal train station and and as soon as I started walking I felt that familiar buzz I always get when walking on new ground. Thanks to the excellent 'The Capital Ring' guidebook I had no trouble finding the start of the walk. The link route from the station leads through the Royal Arsenal site along a wide pedestrianized road passing the Royal Artillery Museum and some ancient military relics. This area has obviously lost its importance to the military and has been redeveloped for housing and leisure activities.
The official start and finish of the walk is by the Woolwich foot tunnel (south side of the river). It then follows the Woolwich riverside promenade for a while (joined by a couple of other footpaths, the Thames Path extension and the Green Chain walk) with views towards the Thames Barrier, the O2 Dome and the Docklands scyscrapers. I left the river via the 'Thames Path Interim Route'. There was a short familiar section along roads which I remembered walking along to reach the start of the Thames Path last September. After crossing the busy main road the route now led pleasantly through Maryon Park followed by the Maryon Wilson Park towards Charlton. I particularly enjoyed the spring flowers, steps up a steep wooded slope and later a gentle uphill walk alongside a pretty little stream. I was now in Charlton and soon entered the large Charlton Park. I walked through without stopping at Charlton House which, according to my guide, is a fine example of a Jacobean Building. It is now a community centre and library and also has a café and toilets.
I carried on walking through the not very inspiring Woolwich Woolwick Common towards Shooters Hill. After crossing a busy road the path soon veered away from the road first through a grassy field and then pleasantly uphill through woodland at Eltham Common. Reaching the top I have arrived at the highest point of the entire Capital Ring walk (128 metres - don't think that would impress my Swiss family!) but I felt on top of the world! I continued walking along to the strangely named and slightly weird looking Severndroog Castle. It has a tea room but it had just closed for the day (3.30pm) so I took in the view towards the unmistakable shard and Canary Wharf and the distant hills of the North Downs before heading into the ancient woodlands of Jackwood and Oxleas Wood. I stopped at the Oxleas Wood Café for a coffee and bag of crisps (also bought a souvenir mug). This appeared to be a popular spot with dog walkers (mostly female) as I'd never seen so many dogs in one place. I soon disappeared into the woods again conscious that I still had a long way to go. As the path continued downwards I became more and more aware of the parakeets which have have colonized this wood in large numbers. They are very noisy - I couldn't hear any other birds for their screeching and wonder what effect this foreign invader has on the native birds?
After crossing a road I entered Eltham Park, walking first along a woodland path and then emerging into open parkland, passing a lovely duck pond and then enjoying more views of the City skyline. I considered ending today's walk here (Falconwood Station) but because the next section is only three and a half miles long (and tagging it onto the next section would make that day's walk too long) I decided to go for it and finish at Grove Park. I kidded myself that I could do this quite quickly if I stepped up the pace - after all Roger Bannister could have run it in 15 minutes and Mo Farah probably even quicker! So, as the late afternoon gloom deepened I hastened towards Grove Park. I hurried past Conduit Head, Holy Trinity Church and Eltham Palace and walked along King John's Walk for what seemed like miles. This path offered yet more views of the now lit up city skyline. I survived crossing over a railway line on a spooky footbridge, slipping along a muddy footpath between paddocks and sport fields and then the Quaggy river to reach Mottingham and civilization. Another footpath along the Quaggy brought me to the main road and on to Grove End train station just before full darkness. While waiting for the train I ate the remainder of my lunch and some chocolate to try and recover from the exertions. It's been a good walk, but probably a bit too long for a Sunday afternoon stroll. My reward will come in the next section, which will be much shorter.
​          Note to myself for next winter: start the walks much earlier so as not to run out of daylight!