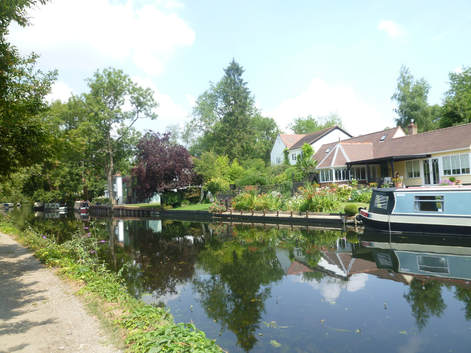 ​        Yesterday evening the heat wave was disrupted briefly when we had a good hour of rain! Marvellous. What’s more, today’s temperature was forecast to peak at about 26°C. That’s enough of an invitation for me to go walking. Because of the easy transport to the start of the walk I decided to continue the walk along the Grand Union Canal. I set off early and started walking before 9.30 hoping to avoid the worst of the heat.
I soon left West Drayton behind and made good progress on the shady side of the canal. Just after Cowley Lock the walk crossed over to the other side and I was now walking in full sunshine. I applied more sun lotion, picked some early blackberries and soon arrived in Uxbridge. It was too early to stop for refreshment so I walked straight past the canal side pub. I watched a narrowboat navigating through the lock and got into a brief conversation with an enthusiastic American who opened the gates – I offered to help and rather enjoyed making myself useful.
At Denham Lock I was ready for a coffee. Fran’s Tea Garden (a little shabby but friendly) invited me in and I enjoyed my coffee next to a bookshelf filled with books and games. Could have stayed here all day without getting bored! But I didn’t hang about, saved my cake for later, and, when I emerged from the café, the American and his narrowboat crew were just passing through the lock. The towpath was still on the sunny side but there was some shade from the trees lining the next few miles as the canal made its way through the wonderful Colne Valley Regional Park.
I stopped at the Coy Carp in Harefield for lunch (or rather a large glass of Pimms and some peanuts) at a nice quiet table in the shade. Soon the American boatman and his companions arrived – obviously had the same idea. I realised that walking along the towpath is just as quick (or slow) as going on a boat. Suitably refreshed, I braved the now considerable heat and made my way to the Batchworth Lock and Canal Centre. Along the way I spotted a heron, coots, moorhens, geese and even some tiddlers swimming in the clean waters; not forgetting the tiniest little moorhen chicks – so cute!
I’d planned to finish the walk at Batchworth Lock (Rickmansworth) but it was still only just after 3 o’clock, and with renewed energy thanks to coffee and ice-cream, I decided to continue to Croxley Green, which also boasts a tube station. I’ll remember this section not just for the heat but more so for the uplifting creativity shown by the ‘boat people’ as they adorn their home and surroundings. Canal towpath walking boring? Not as long as people make the waterways their home.
Travel home was slightly more complicated than anticipated, involving tube, train, tube and train again. As I left the Metropolitan Line at Harrow-on-the-Hill and waited for the next Chiltern Railways train to Marylebone, I contemplated eating the crumbled cake that I saved from Fran’s Tea Garden earlier in the day, but then a big black man from East Ham, who came to Harrow for some shopping, offered me some juicy black cherries. Delicious! I think he guessed by my weary look and dusty feet (I was wearing sandals) that I was in need of a pick-me-up. By the time the train arrived I’d eaten several handfuls and felt uplifted not just by the snack but by the friendliness of this stranger and generally the people (Londoners included) that I encounter on my walks.
My highlights: Wildlife:Useful information
Transport:  Refreshments: Public Conveniences:
​Continue to Section 3 (Croxley Green to Berkhamsted)
Click here for more photos from this walk