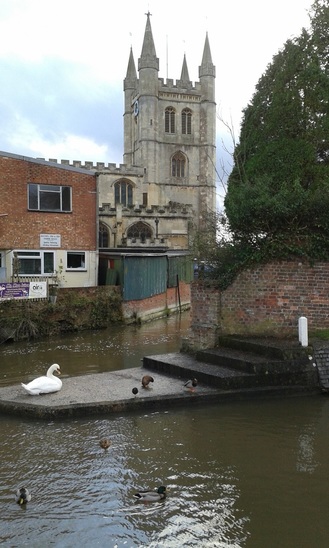 Last night I decided to continue my walk along the Kennet & Avon Canal as the Thames Path is too muddy at the moment. I checked the train times and was pleased that trains would leave Reading (or Theale) every hour. I cycled to the station, bought my ticket and checked the departure board. To my annoyance my train was not listed! The next train heading towards Newbury wasn’t due to depart for another 45 minutes. I checked the timetable and soon realised my mistake. Let this be a cautionary tale: when checking trains late at night make sure that when entering ‘tomorrow’ as the date for your journey that it is still before midnight otherwise, like me, you might be planning your Sunday travel on a Monday timetable!
So now I had to make a decision about today’s walk. Because the next train wouldn’t stop at Midgham (Woolhampton) I couldn’t do the planned walk to Kintbury.  I briefly thought about abandoning the walk completely, especially as I also forgot to take my camera, go home and do something else but the sun was shining brightly and so, after a long wait for the train, I eventually arrived at Thatcham. (I will do the short section between Woolhampton and Thatcham another day.)
The walk started pleasantly but the canal was nearly overflowing and there was a breach in the bank where I had no choice but to step into the ankle-deep water – should have put on my waterproof boots rather than the shoes. Everyone else on the path sensibly wore wellies! The water soon drained out of my shoes and as the weather was mild my feet didn’t get cold or suffer in any way. I enjoyed the rural tranquillity and was amazed at the difference between walking to Newbury and driving along the A4. Along the A road Thatcham seems to merge with Newbury but here there was no sign of any development. Walking between canal and nature reserve I enjoyed the varied birdsong in springlike conditions. The path was muddy in places but there were also some nicer bits alongside woodland. The trees must absorb a lot of water as I’ve noticed before that paths are in  much better condition beside or in wooded areas.
Arriving in Newbury I stopped at the ideally located Costa Coffee shop for a pre-lunch cappuccino and cake and then ate my sandwich at Newbury Lock. This is a lovely spot for a break. There are benches, a pub/restaurant (looked tempting), views of the church, the old bridge (high street) and pretty cottages lining the south bank of the canal. I continued walking, enjoying the transition from town to countryside. Apart from a short very muddy stretch the path was in good condition. I passed a few more locks and bridges (typical canal towpath walking) and enjoyed the mxture of clouds and sunshine as the sun slowly set. For the first time since starting the walk I saw some hills (the Newbury Downs, presumably). Made a nice change. When I reached Kintbury it was an hour before my train was due to leave. I still felt energetic and as I enjoyed the walk I made the, with hindsight not so wise, decision to carry on walking to Hungerford. The path soon deteriorated and became extremely slippery.  The fading daylight didn’t help as I slowly slithered towards Hungerford. Eventually the path improved and I tried light jogging to make up time. As I approached the town I was hoping desperately that the train was delayed – unfortunately it wasn’t and I missed it by less than ten minutes! I now had an hour and 50 minutes to kill! I wandered up the high street pondering whether to enter one of the pubs or even the Indian restaurant but I wasn’t brave enough. So I wandered down again and just before the bridge over the canal there was an old-fashioned tea room. It was open until six so I entered, conscious of my filthy shoes and mudspattered trousers, and ordered a pot of tea. So glad I found this place. The tea was served in a pretty tea set and the friendly waitress dressed in old-fashioned long skirt and blouse made it a pleasant experience. It all seemed very olde-worldly. Good value too – I had three cups of tea for less than the price of the cappuccino in Newbury. Refreshed and warmed up I left the tea room as they were closing and slowly walked to the train station. Finally I was on the train and arrived home just after seven.
I think I may now have to look for a walk on higher ground as the river and canal side paths are just too muddy and it won’t take much more rain before flooding may occur.
Today I have hopefully learnt a lesson: make sure you plan train travel properly and don’t overestimate how far you are able to walk when you have limited time – conditions may be against you and slow you down. Nonetheless I enjoyed the adventure and even managed to take some photos on my phone.