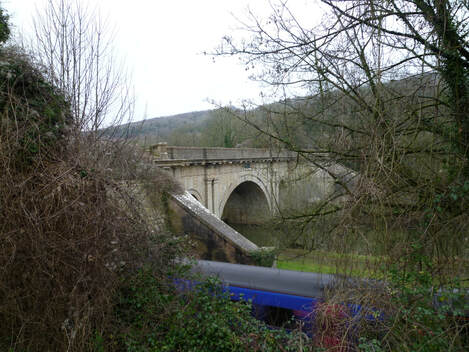 Dundas Aqueduct and Great Western Train
Friday 28 December 2018
​
​        Although the day started off grey and misty, I was hopeful that the sun would soon emerge. A walk between Christmas and New Year’s Eve is just what’s needed to burn off excess calories and get body and mind back in shape. Walking along the Kennet & Avon Canal seemed a good choice on this short winter’s day because of the good path, easy to follow route, and the bright lights of Bath that would be ready to guide me to my destination. Trains were running normally and I soon arrived in Bradford-on-Avon,
Before resuming the towpath walk, I made time to wander around the attractive town with the River Avon at its centre. The sun tried to make an appearance but the fog persisted well into the afternoon. Back on the canal towpath I joined many other people (and dogs), old and young, enjoying a walk and fresh air after the Christmas indulgences. I soon reached Avoncliff and, after crossing the river Avon on the impressive aqueduct, the walk continued between canal and river. I stopped for a short lunch break on a bench with a view across the Avon valley and soon after arrived at another, equally impressive aqueduct (Dundas). After crossing the River Avon again, I followed a sign to the Angelfish Café. Having walked briskly for the last couple of hours, I was more than ready for a cappuchino. Then, as I was leaving Dundas Aqueduct and Wharf, the sun, at last, made a welcome appearance and I could tell by their singing that the birds appreciated the late sunlight just as much as me.
Soon I approached Bathampton and then Bath itself. The scenery changed subtly as the hills of the Cotswolds came into view on the other side of the River Avon. I was daydreaming about walking in those hills, perhaps ‘doing’ the Cotswold Way. The sun now started setting and it gradually got darker as I followed the canal into the centre of Bath. I ended the walk by the Abbey and Roman Baths. The abbey square and surrounding area were busy with tourists enjoying the festive atmosphere – the shops were still open, and restaurants started filling up. It was too late in the day for me to visit any of the attractions of this lovely city but I made a promise to myself that I would join a walking tour on my return in the not too distant future, before resuming the walk to Bristol.
​My highlights:Wildlife:Useful information
Transport: Refreshments:
Click here for more photos from this walk
Click here for Section 10: Bristol to Avonmouth (Section 9: Bath to Bristol yet to be walked)