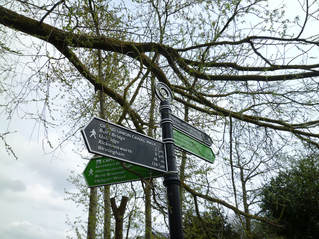 Footpath junction
Sunday 15 April 2018
​ It’s been nearly three months since my previous long-distance path section (on the London Loop). Now Spring has arrived, and I was getting very keen to go out exploring and walking again. Because of all the recent rain (and lack of transport on Sundays) I decided to start the Grand Union Canal walk. This walk had two advantages over the others. Firstly, because of its location in Greater London, I was confident that mud would not be a problem. Secondly transport was relatively short and easy – even on a Sunday.
This walk starts at the Thames Lock in Brentford but it could also be started in Paddington. The Paddington arm joins the main canal at Hayes. To get to the start of the walk I followed the Thames Path from Kew Bridge train station. From Thames Lock (where the Grand Union Canal joins the Thames) the route should have been obvious but because a footbridge shortly after the lock was closed, I had to adjust the walk to start on the other side. Once I was on the right track the rest of the walk was easy. After walking past an assortment of houseboats I arrived at the busy A315 and after crossing to the other side by the traffic lights I walked past Brentford Gauge Lock, which is surrounded by luxury apartment blocks and restaurants. There now followed a mix of sparkling modernity (the huge glass fronted GlaxoSmithKline building) and shabby old worldliness (a rundown and graffitied boat shed). Birdsong was accompanied by transport noise (planes in and out of Heathrow, cars on the M4, and Piccadilly Line trains rattling across a bridge). After Clitheroe's Lock the walk crossed to the other side of the canal on the old (1820) iron Gallows Bridge. Now the walk acquired a countryside feel. The tree lined path was bordered by a woodland park. Spring was in evidence with tree blossom starting to bloom. I stopped for lunch at Osterley Lock, just as I did when I walked the Capital Ring a couple of years ago.
It was not long before I reached the series of locks at Hanwell. Here the Capital Ring turns away from the canal to continue along the River Brent. Lots of people, including a group of Far Eastern students, were out walking and taking photos. The sun made a welcome appearance and life felt good! However, soon afterwards, enjoyment of the walk was tempered by the drizzle and especially by the large amount of litter I couldn’t help noticing along the banks as well as in the canal. Shortly after the Three Bridges crossings I spotted a dead pigeon and furry animal floating on the murky water while just a few metres further on a man was fishing. Swans, ducks and coots also shared the water - I felt sorry for them. The sun came out again briefly, off came the jacket, but almost immediately the rain returned and became heavier. Soon I passed Bull’s Bridge, where the Paddington Arm joins the main canal and when I reached Hayes I left the canal to find a coffee shop. I was more than ready for a cappuccino and cake but also wanted to dry out a bit and wait for the rain to stop.
The rain eased off and I was back walking. I watched some public-spirited people fish large objects (rusty trolleys and other unidentified rusty objects) out of the water. Soon after I encountered the first muddy stretch but the walking was quite pleasant – the rain was still falling but I enjoyed the tranquillity here. However, I made another gruesome discovery – a small dead headless rabbit on the side of the path. I guess it was killed by a fox.
When I passed another newly-built modern building, the previously muddy path was transformed into a perfect walking surface. I guess landscaping and path improvement was part of the building permission contract.
I can't disagree with that. Not long before reaching West Drayton I passed the Brickmaking History Park through which I walked on a recent London Loop section. I was almost tempted to walk up the steps and enjoy again the birch tree lined path. The rain had now ceased completely, and, after a slightly scary encounter with a drone (I don’t trust them and don’t like them flying near me) I arrived in West Drayton and left the towpath for the short walk to the train station. I didn’t have to wait long for the train back to Reading. This section was easy. I seemed to eat up the miles effortlessly. But then, of course, there aren’t too many ups and downs when you follow a canal.
My highlights:
Wildlife:
Useful information
Transport:
Refreshments:
Click here for more photos from this walk
​Continue to Section 2 (West Drayton to Croxley Green)