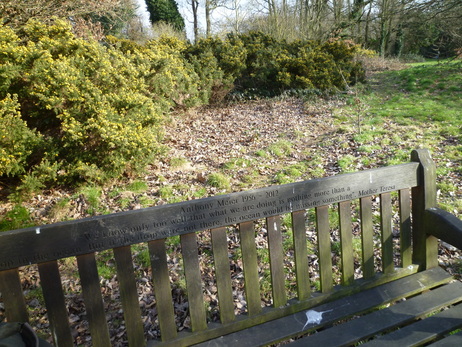 A dry day with some bright spells is forecast so I set off, wrapped up warm against the cold. It really felt bitter as I cycled into the easterly breeze to the station. Waiting for the Paddington train everyone crowded into seemed the heated waiting room. Once on the train I continued reading 'To Kill a Mockingbird'. This time I planned the journey properly and (tube to London Bridge, train to Grove Park) but I did miss the train by seconds - it pulled away just as I reached the platform. That left me with half an hour to kill - never a problem in London. I walked to the main part of the station, made use of the toilets, bought a coffee and a croissant and admired the 'Shard' from close range. The train out of London Bridge offered more great views of the Shard, Gherkin, Walkie Talkie  etc. and I even caught a glimpse of Tower Bridge. I was buzzing again!
Arriving at Grove Park I set off at a brisk pace to get warm. There was a bit of road walking first - inevitable on a city walk, I guess. Route finding was again easy with my guide book and the sign posting. A first highlight was walking along the Railway Children Walk (named after E. Nesbitt's famous book; the author lived nearby), then passing Grove Park Nature Reserve before crossing over the main London to Kent railway line with a view over the large Hither Green Cemetery. My guidebooks informed me that there was a major rail disaster here in 1967 when 49 people lost their lives. A reminder that life is precious and can be taken away anytime, anywhere.
Shortly after the railway crossing I admired a cute three months old friendly puppy. This was its first outdoor walk (ah). I continued walking at a good pace on quiet roads at first and then along Downham Woodland Walk. I stopped briefly to chat with some litter pickers (Friends of the Downham Woodland Walk) - there was actually a lot of litter here so I thought they needed some encouragement. Good luck to all the volunteer litter pickers!
The sun had now come out and suddenly it felt spring-like. After I emerged from the woodland walk and crossed a few roads I entered the large and attractive Beckenham Place Park. At first the walk ran alongside a hedge on the side of the park and I enjoyed listening to songbirds and watching them dart in and out of the shrubbery in the warm sunshine. Soon the path entered another ancient woodland (more parakeets) and I enjoyed walking slightly uphill (London seems to be full of hills!). Lots of families were out and about enjoying the now beautiful day. At the top there was a good view across the park to the old Beckenham Place Mansion. I found a bench to eat my lunch on before walking across the the run down mansion, which is now the golf club's clubhouse. At the back there was a visitor centre and tearoom (only open on Sunday afternoons) and although they were just closing  I was able to use the toilets.
I left the park and followed the far from tedious roads. Some points of interest en route: Kent County Cricket Ground, Crystal Palace's training ground, a grand church and a beautifully tended front garden bursting with early spring flowers. The next park I walked through was Cator Park, which has a couple of rivers (not in their natural state) and some beautiful trees, not forgetting the parakeets! Leaving the park the walk continued along roads, passing a couple of schools and winding through another park (Queen Alexandra Recreation Ground). I was now in Penge. A surprise in the shape of some lovely pastel-coloured flat roofed terraced houses awaited me here in the midst of quite a drab area. Penge has two railway stations (East and West) so the walk could be ended here but I was now looking forward to reaching Crystal Palace. After passing by a pub (Bridge House), Penge West Station and underneath an old railway bridge I reached the entrance to Crystal Palace Park. The café was still open so I bought a cup of tea to take away and followed the dinosaur trail. What a delightful place this park turned out to be! As well as all sorts of weird creatures there were waterfalls, hills, canyons and a pretty lake. On the way to the station I passed the Crystal Palace Athletics Stadium and the station was conveniently situated at the end of the park.
According to my guide book I have now successfully completed a quarter of the walk! Can't wait for the next three quarters!  It's been great so far - loving the Capital Ring!