Here's a collection of the beautiful walks I have enjoyed in Switzerland, my country of birth. Switzerland is well-known as a country of amazing mountain scenery, rivers and lakes, and, combined with the ease of reaching even remote areas by public transport, make it ideal for exploring on foot.
Centovalli - 20 August 2019
Yet again the weather was just a little bit dodgy but we were hoping that further south it would be sunnier. We boarded the train which took us along through the dramatic and beautiful Centovalli into Northern Italy.  .... ​to be continued....
Mount Cardada - 19 August 2019 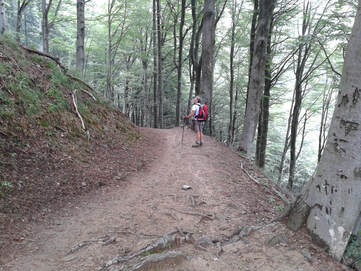 Calm before the storm
Although the weather forecast was not too promising, I hoped that the usual sunny Ticino region would not disappoint.  I met Marlies and Gabriel at Arth-Goldau where we both arrived from our separate starting points, and boarded the Ticino bound train. We chatted as we crossed the Alps through the new Gotthart tunnel - the longest railway tunnel in the world. The sun shone brightly when we arrived in Locarno and, after checking into our hotel, we took the funicular and cable car up Mount Cardada. From there we walked through beech and chestnut groves on a lovely mountain trail. Every now and again we emerged from the trees to walk through steep-sloped meadows and I'm sure the views would have been absolutely amazing had it not started to rain! In fact, we walked straight into a thunderstorm. We decided that rather than continuing towards the centre of the strom it might be more sensible to return to Mount Cardada and the cable car station. The rain did stop eventally and we walked a bit further in the other direction. I particularly enjoyed watching a large herd of Highland cattle grazing on a steep slope in a birch forest. Afer enjoying some stunning views across Lago Maggiore, the Megadino Ebene, Valle di Maggia and the Centovalli, we returned to Locarno. After freshening up we walked to the nearby Piazza Grande for an Apero and then dinner (pizza for me).
Lucerne city walk - 16 August 2019

Kapellbruecke
Today I decided to return to Lucerne. This is a city I've visited on many occasions, not least because an uncle and aunt of mine used to live there.
Arriving at the train station located next to the Vierwaldstaettersee (Lake Lucerne) I was immediately in the midst of a throng of tourists from all corners of the world. I crossed the famous Kapellbruecke and then walked along the river Reuss and then uphill next to and on top of the old city walls. The tourist appeared to have stayed in the old town centre below, shopping in the expensive shops or sipping coffees and eating icecreams by the river and lakeside cafes. I enjoyed the views from the top but it was a little hazy so the mountains did not look their best. Soon I returned to the old town and found a space at a cafe where I treated myself to a delicious icecream sundae - a 'Coupe Lotus' consisting of mango sorbet, meringue, exotic fruit and whipped cream. It got really hot and after a short walk admiring painted buildings, architecture etc, I escaped the hot streets by visiting an exhibition on Turner's paintings on 'Mountains and Sea'. Turner spent a lot of time in the Lucerne region and many of the paintings on show were created during that time.
The nice thing about city walks is that you are never far from a place to eat or drink and I treated myself to a delicious plate of food at a self-serve restaurant where your full plate is weighed to determine the cost! 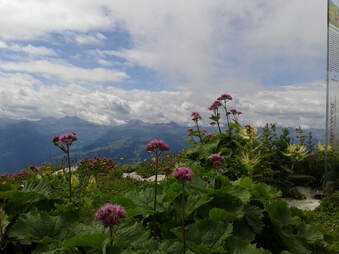 Flower path on Chaeserrugg
Easily reached from the lowlands of northern Switzerland, the Toggenburg mountains in the East of the country are a popular destination for a day-hike and I have walked in the area every now and again since childhood. The weather forecast was less than promising but the fog and cloud did lift somewhat when we reached the top of the Chaeserugg (by cable car) - a mountain that enjoys fantastic views towards the Rhine valley, the Toggenburg region and the turquoise waters of the Walensee far below. Despite the swirling fog we enjoyed some good views and the beautiful mountain flowers and herbs were a pure delight, as we walked along a circular path to work up an appetite for lunch. The summit restaurant is part of the cable car station building, designed by world renowned architects Herzog and De Meuron.
After lunch we walked mostly downhill, accompanied by cows and their melodious bells. We spotted a marmot and some mountain goats in the distance. The weather, unfortunately, deteriorated rapidly, and my sister's stomach wasn't feeling too good, so we decided to shorten our walk. Luckily for us there was a chair lift station on our route and despite us being the only customers, a two seater gondola (with cover against the rain) was quickly readied for our return to the valley. 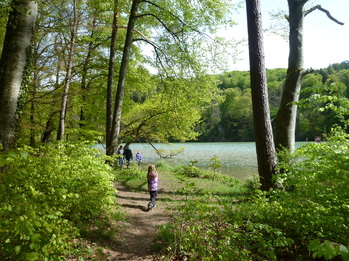 Path through beautiful woodland by the river Rhine
The sun made an appearance after the previous day's non-stop rain and we (my sister, brother-in-law, nieces and nephew) decided to go for a walk along the Rhine, starting and ending at the small town of Eglisau. There is a footpath on either side of the river and we followed the path as far as the impressive Kraftwerk straddling the river.  This power generation plant interestingly includes a footpath allowing pedestrians to get to the other side of the river. After crossing the Rhine we entered Germany. Not that there was any sign of a border or border control. The only way to tell that we were in a different country was by the colour of the footpath signage (yellow in Switzerland, white in Germany). There was plenty to interest the children and adults alike, from WW2 bunkers, nature reserves, waterbirds, swallows and songbirds to the afore mentioned hydro-electric power plant. Part of the walk followed the ViaRhenana - a historic long distance route which starts in Kreuzlingen on Lake Constanze and follows the Rhine to Basel. My personal highlight was the walk through a beautiful woodland, resplendent in vivid green spring colours. 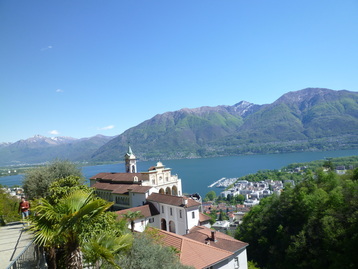 Madonna dell Sasso, Locarno
Winter has made an unwelcome return to Northern Switzerland so my sister suggested we go to the most southern part of the country - the Ticino. Also called Switzerland's Sun Terrace, this area has an almost Mediterranean climate. As our train entered the Gotthard Tunnel the snow was falling but sunshine greeted us as we emerged on the other side. Soon we reached our destination, Locarno, which feels quite Italian.
​        After checking into our city centre hotel we walked the short distance to the funicular station where we boarded the little train which took us up as far as Madonna dell Sasso, an impressive church and monastery. From here we walked up the hill (lots of steps!) to join a path eastwards through beech and chestnut woodland and were soon rewarded with some fantastic views of Locarno and Lago Maggiore. We followed the Sentiero Verzasca for a while before returning downhill to the city centre (hundreds of steps!), stopping en route to admire the wonderfully ornate interior of Madonna dell Sasso. Refreshed by the coolness and serenity of the church we continued downhill. By the time we reached the centre we were more than ready for pizza! 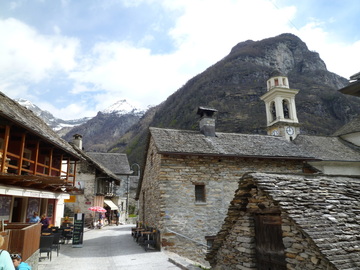 Sonogno, Valle Verzasca
This footpath from the village of Sonogno to Locarno has been voted one of the top ten of Switzerland's long-distance footpaths. The whole path could be walked in three days. I had walked another section a few years ago and always knew that I would return here to do some more walking. There is something spectacular about the crystal clear turquoise waters and sculpted stones of the Verzasca River. There are old stone bridges and picturesque villages to admire. Today we travelled to the top of the valley by Post Bus (Postauto) to start our walk at the old village of Sonogna. I couldn't resist buying postcards and taking lots of photos. The area feels quite remote but because of the ease of getting here from Locarno you are never far from other walkers. In the summer people sunbathe on the boulders in the river and bathe/swim in the cool clear waters.
It was not warm enough for a dip today so we walked along the well-maintained path, stopping for a picnic by the river. Despite its popularity with tourists and hikers, the valley seems to have been left behind somewhat and we passed several abandoned old stone houses. It all adds to the charm though and maybe development is frowned upon here to preserve the valley's authentic character.
We finished the walk in the village of Brione where we hopped on the bus for the return trip to Locarno. 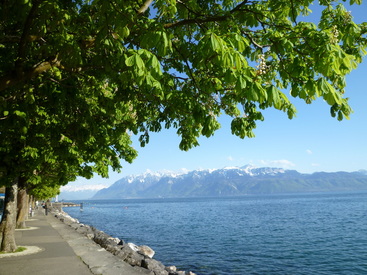 Lutry, Lake Geneva
Another trip took us to the south west to the beautiful city of Lausanne - home of the Olympics. We walked along the lake front at Lausanne passing hundreds of yachts and sailing boats and after settling into the youth hostel for our overnight stay we took the train to the nearby medieval town of Lutry. A particularly lovely walk follows the lakeside from Lutry to Pully - a suburb of Lausanne. Away from the lake the beautiful UNESCO world heritage site, the Lavaux Vineyard Terraces, which cover the lower mountainside and stretch from here to the Chateau de Chillon, invite further exploration. It is thought that these terraces were created in the 11th century but there is evidence that the Romans grew vines here much earlier.
The late afternoon sunshine brought a particular quality of light to add beauty to our walk. As the sun slowly set, the snow-peaked mountains took on a pink hue and it all felt very peaceful. We enjoyed watching cormorants, gulls, herons and ducks as we strolled along the lake.
The following day the weather took a turn for the worse, which was ok as our plan was to visit the Olympic Museum. We were lucky enough to see the Olympic flame as it stopped here on its way from Greece to Rio. I could write a lot more about the museum but wouldn't know where to start or end, and anyway this is a walking website. So, having been a huge Torvill and Dean fan, I'll just mention that I was thrilled to see the exhibit of their original 'Bolero' costumes.
In case this report reads a bit like a Swiss Tourist Office publication, I will add that we found the public toilets along the lake front less than impressive. We came across some modern ones with see-through doors (!?) and others which consisted of a hole in the ground - the last time I encountered one of these was many years ago in a less than salubrious area of Paris.