​​ After some wonderful walking in the Canary Island in January last year I was looking forward to escape the English winter and rediscover walking on dry footpaths in a great climate. This time I chose a walking holiday in La Palma, which promised some excellent walking in the surprisingly high mountains and against a background of amazing volcanic scenery. 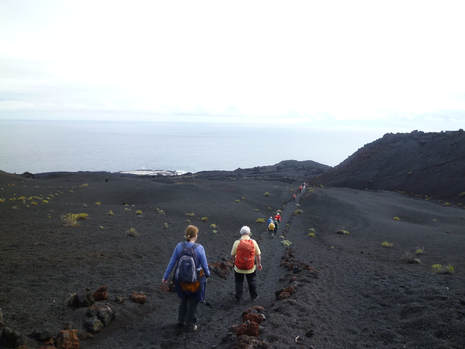 On the way to Faro de Fuencaliente
Friday 23 February 2018
Our first walk started in the village of Montes de la Luna, which we reached after a short taxi ride from our hotel in the beach resort of Los Cancajos. Unfortunately the drizzle at the start of the walk turned into proper rain and culminated in a torrential downpour as we reached Fuencaliente. This sounds like not much fun but walking through the pine forests on excellent paths was not that bad because the rain was not cold! We stopped in a bar in Fuencaliente for a well-earned coffee and some more team bonding. As we left the bar the rain became torrential and half our group had enough and, despite the weather forecast of better weather in the afternoon, headed for the nearby bus stop to catch a bus back to the hotel. Those of us who persevered were rewarded with some beautiful walking and great views! Soon after we'd resumed the walk the rain eased and stopped completely when we reached the visitor centre by the Volcan de San Antonio. The sun made a first appearance as we walked along the rim of the impressive crater of the volcano. We then walked downhill all the way to the lighthouse and salinas (salt pans) at Faro de Fuencaliente. The walking was great on the ash covered path and we now had views of volcanic hills and the sea. By the time we arrived at the lighthouse we had dried out and enjoyed a refreshing orange juice on the terrace of the nearby bar restaurant before returning to the hotel by taxi. 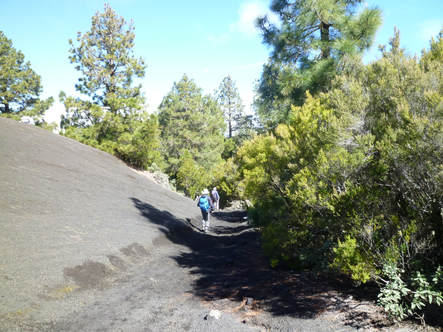 Lovely walking on volcanic ash
Saturday 24 February 2018
What a difference early morning sunshine makes! I was up early and looking forward to the walk. Soon after breakfast taxies ferried us uphill and dropped us off in a wooded area of pine and laurisilva forest. The temperature was noticably lower up here than at sea level and fleece and jackets were quickly donned. We soon warmed up, however, as the sun burned up the remaining mist and we started walking through the woods, uphill first, before dropping gently down to the Refugio del Pilar. Here we stopped for elevenses before continuing the walk in lovely sunshine. We soon emerged from the trees and had some fantastic views towards the higher peaks in the central area of the island. After a break for our picnic lunch and applying suncream, it was all downhill, first on soft volcanic ash and then on more rocky ground. A few pine trees have sprung up again in this volcanic desert and lichen and mosses cling to the rocks. Soon the ground levelled out and there were signs of civilization - almond trees, a few houses and gardens and then a road. We took a footpath across more rocky ground to the Visitor Centre of the Caldera de Taburiente National Park, our final stop on today's walk. We were  more than ready for a cool drink but unfortunately this visitor centre didn't provide anything in way of refreshments. Rather than check out the exhibits and watch a film we decided to hop on the next bus back to Los Cancajos.
Had time for an invigorating swim on the black sand beach. Lovely! 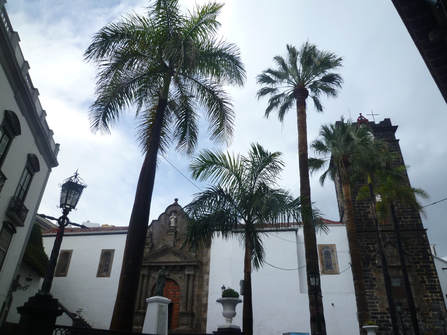 Santa Cruz Cathedral
Sunday 25 February 2018
A first storm arrived on the island today and our walk leaders decided this would be our 'free day'.  I took advantage of the early dry weather to walk to the capital, Santa Cruz. The coastal walk - although not on footpaths - was better than I thought as on this Sunday the minor road I walked on, was traffic free. Apart from the sea views there was plenty of added interest, not least the gathering storm clouds. The road took me past a cement factory and the port. No cruise ship was there today but a big container ship was being loaded. As soon as I reached Santa Cruz the rain started, accompanied by gusty winds. I sheltered in the Cathedral for a while, particularly admiring the intricate ceiling, before walking on, in the rain, past some lovely town houses with traditional balconies, a couple of picturesque squares and then stopped in another church where a service had just ended giving me an opportunity to people watch as local families socialized. The nearby museum appeared to be closed so I decided to walk back through another cobbled street to the bus stop and head back to the hotel.
When I reached the bus stop the rain stopped and the sun made an appearance so I walked back to the hotel. The container ship had left port and all was quiet in that area. Despite the dire weather forecast it wasn't a total washout and I enjoyed a bit of exploring on my own. 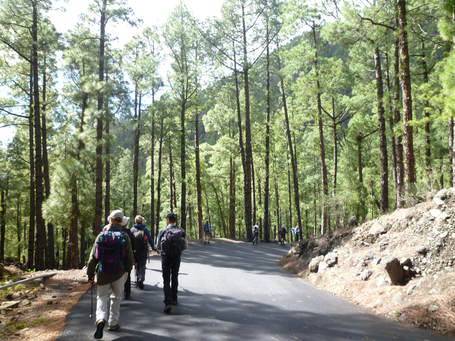 Not quite the walk we had in mind!
Monday 26 February 2018
Woke up to a blue sky and bright sunshine! This day promised to be the highlight of the holiday - a walk high in the mountains of the Caldera de Taburiente National Park. We set off in our taxies to the start of the walk at the end of the road. Our guides informed us last night that, because of the heavy rain yesterday and snow and ice on the highest mountains, we would not be permitted to walk at a height above 1800 meters. This would still allow a wonderful walk. However, as we started walking uphill on a narrow path, a National Park security guard called us back and informed us in no uncertain terms that all the trails up here were closed! We couldn't believe it but, after a short stroll to a mirador to admire the beautiful scenery, we had no option but to head downhill again. We tried walking down a pretty trail that ran roughly parallel to the road but the guard spotted us and didn't allow us on that trail either! Road walking was definitely not on our itinerary but, alas, we had no choice! It wasn't as bad as it sounds though as the route was pretty scenic. Eventually we followed a path through pine woods to a refugio (picnic site) where we stopped for lunch. Then we continued walking to the National Park Visitor Centre. It was quite hot now and rather than look at the exhibits most of us decided to hop on the next bus back to the hotel. With plenty of energy left, a wonderful and refreshing swim in the sea made up for the lack of exhilarating walking. 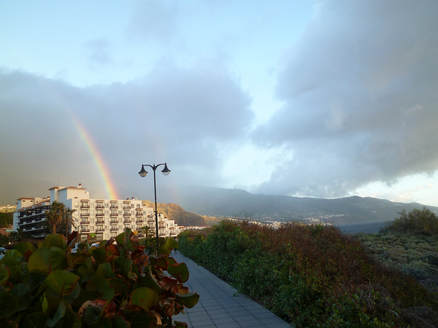 Weather!
Tuesday 27 February 2018
The weather has gone rapidly downhill again and with all the mountain trails still out of bounds, we walked to Santa Cruz and then uphill along a barranco (ravine) to a pretty village. The stormy weather made for an invigorating and atmospheric walk along the seafront in Santa Cruz. The walk uphill into the hills wasn't particularly scenic as the mountains were obscured by low clouds; the steady drizzle didn't help either, but I was interested in the roadside vegetation (prickly pear, aloe vera and fruit plantations) and I also spotted some unusual birds on a rock face on the other side of the barranco. When we reached the village we spent time in the beautiful church before eating our lunch on a sheltered bench, pleased that the sun made an appearance. However, within minutes, gusts of wind shattered the peaceful setting of the village square and we watched as a large branch of a tree crashed down next to the church! Luckily the wild weather calmed down shortly afterwards and we caught the bus back to Santa Cruz. A few of our group stayed in Santa Cruz for a visit to the Island Museum, followed by an iced coffee. Sadly the weather also put paid to the evening entertainment in the hotel. The 'balancing act' performer was stuck in Tenerife! 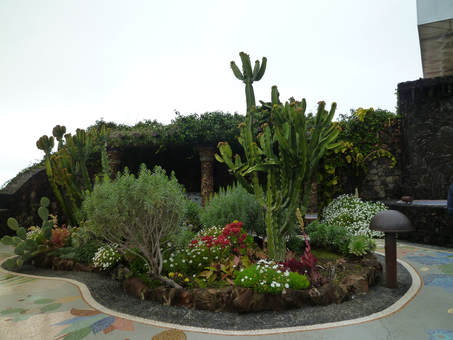 Plaza la Glorieta
Wednesday 28 February 2018
Our walk leaders struggled to find a mutually acceptable solution to the weather problem! Among the suggestions were a whale watching trip (no boats would go out in this storm!) or a trip to the sky observatory high up in the mountains (too much snow and ice up there!). In the end a coach trip across the island with stops at a tobacco museum, Plaza la Glorieta (garden with tiled artworks), a lava field where flows of lava have created tunnels, and the Museum of the Natives in Los Llanos was arranged. A wine tasting experience and lunch at a restaurant serving local cuisine was also included. We were accompagnied on the trip by a couple of knowledgable and enthusiastic young local guides. It was an enjoyable day, although we would obviously have preferred hiking on beautiful trails. A few group members ("a coach trip is not our idea of fun") organised their own unofficial walk on the coastal route in the north of the island and apparently the weather was not too bad and they enjoyed it. Sadly the evening entertainment was again cancelled because the entertainers were unable to travel to La Palma. Shame really - I was looking forward to the folklore evening! 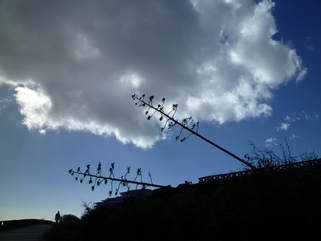 After the storm
PS:  The night before our return to England was incredibly stormy. It was quite scary, particularly when bits of the roof fell down. Going to sleep was proving impossible until the early hours. Thankfully, the storm eased towards the morning and when I woke up on the day of departure the sun was shining and hotel staff were busy clearing up the debris around the pool area while others were checking out the roof. The flight home was surprisingly quiet. Storm 'Emma' had moved on to Spain and our plane landed smoothly at Gatwick in defiance of 'the Beast from the East' that greeted us on arrival!