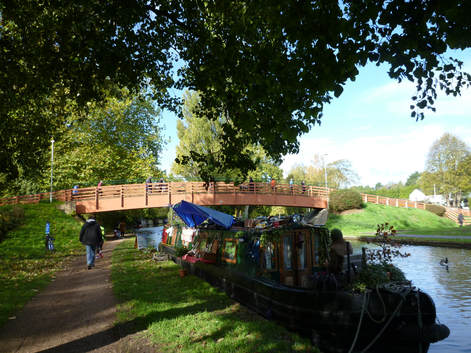 Berkhamsted
​   At 2 am today the clocks were put back, but I kept mine at Summer time because I needed the extra daylight hour for this long walk along the Grand Union Canal. So, no lie-in for me, but up early for the three-hour journey to Berkhamsted. It was chilly and damp when I set off but when I arrived at the start of the walk the sun came out and I was soon able to remove a layer of clothing. Before returning to the canal, I wandered around the impressive ruins and moat of the Norman castle conveniently located next to the station.
I then joined the towpath where I left it a few weeks ago. Today this historic market and commuter town looked beautiful in the crisp air and bright sunshine. Across the canal there is a Canadian Totem Pole on the site of a former timber yard. Shortly after, the path crosses to the other side and continues through a typical urban riverside park, with ducks, geese and swans in abundance.
After Northchurch and Dudswell Locks the walk became more tranquil and rural. A heron was reluctant to leave his spot on the towpath – eventually it moved to the bank and then flew off as I passed. Soon after, I arrived at the curiously named Cow Roast hamlet and lock. There is also an inn of that name here and presumably they serve roast beef. After leaving Cow Roast and its marina, the walking turned into pure pleasure as the sun combined with the many shades of autumn colours to make a colourful spectacle. Added to the visual delight was the fragrance unique to slowly decaying leaves. I was entranced by the golden leaves fluttering in the breeze before settling on the ground, slowly carpeting the path.
The Ridgeway crosses the canal here (Tring) but I continued walking underneath the bridge on the towpath towards Marsworth. When I reached Bulbourne, the canalside became much busier, and quiet contemplation and enjoyment of nature was replaced by interest in the people, their dogs and children, ducks, swans, gulls and geese, and the geography of the land as the canal approaches Marsworth and its reservoirs. Here the Wendover Arm departs from the main Grand Union Canal. In the meantime, some dark clouds gathered overhead and obscured the sun momentarily. Just the right time for a pot of tea and a scone at the welcoming Bluebells Tea Room in Marsworth. 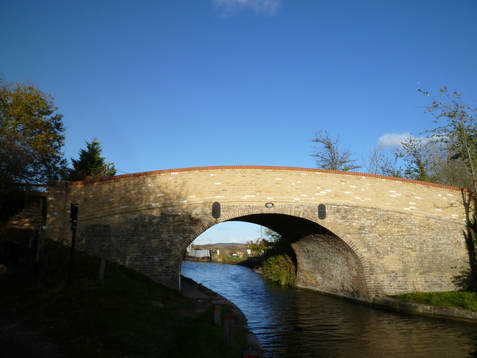 Bridge 123
​        Could have sat here quite happily a little bit longer but time doesn’t stop and I still had a long way to go. I left the tea room and Marsworth, making sure I stayed on the main Grand Union Canal path rather than absentmindedly stray onto the Aylesbury Arm tow path, and soon I was walking on my own again on the now narrow grassy path. The canal crosses the Chilterns, an Area of Outstanding Natural Beauty, and for the next few miles my eyes were drawn frequently across the canal to the prominent Chiltern landmark, the Ivinghoe Beacon. I passed several more locks and bridges, including a crossing under the main Birmingham to London train tracks. The slowly setting sun now cast a golden glow on the scenery and I enjoyed watching the birds in the shrubs and flocks of crows flying from trees. At Horton Wharf Farm and Lock the Outer Aylesbury Ring which had joined the GU at Marsworth now turned left away from the canal while I continued northwards past Slapton lock to the little hamlet of Grove. I stopped briefly to have a look at what was the smallest Norman church in Buckinghamshire (now a private house). It was now slowly getting dark making me quicken my pace and I soon reached Grove Lock and its marina. There’s a pub here and as I walked on I was just a little bit concerned when a homeless man carrying a bottle of cider walked towards me. However, he was polite and friendly. He lived in a tent by the path and in reply to my concern about the cold night ahead he explained how he kept warm. I wished him good luck and carried on walking towards Leighton Buzzard. I still had to walk through a nature reserve and then find my way to the station. My plan was to cross the canal at a footbridge, for a shortcut but because it was now quite dark I continued to the main road for a slightly longer but probably safer route. I soon arrived at the station, which is actually in Linslade - Leighton Buzzard is on the other side of the canal.
I spent the half hour wait for the train eating my leftover food and relaxing. A hot tea would have been nice but there was nothing available. I was pleased to have an extra hour this evening so I didn’t arrive home too late. It was now time to adjust my watch and clocks.
As the distances to get to and from the canal are now quite considerable, and the walks are also rather long, I will pause the Grand Union Canal Walk for now but will hopefully return in Spring.
My highlights: