Back in November we had our first really cold spell of the winter, my central heating promptly broke down, Trump won the US presidential election and Brexit still cast a big shadow. So what to do to dispel the general gloom?  Perhaps a holiday somewhere sunny and warm would help and I surprised myself by quickly booking a trip to Gran Canaria.
So I set off early on 21 January with some trepidation - not because of the travelling but because this was a group walking holiday and, being more of a solitary person, I worried (needlessly as it turned out) about whether I'd fit in or whether I'd feel 'trapped'. In the event, I thoroughly enjoyed the experience, and having all the transport and other logistics taken care of made it easy to simply enjoy the walks (and dinners!). 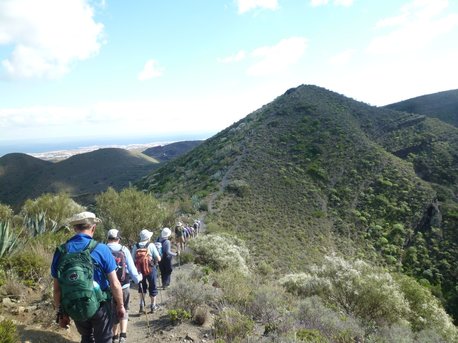 Walk along the top of the Caldera
Sunday 22 January 2017
The first walk took us to the top of the Caldera de Bandana, a volcanic crater. I loved every minute of it. The weather was perfect, the scenery stunning and the exotic vegetation added to the 'away from it all' experience. First we walked down into the crater and then back up again. After a picnic lunch consisting of a jamon and tomato baguette and fruit bought in a shop near the hotel, we then walked all around the top of the crater. This included some exhilarating ridge walking. Generally, the walking was quite easy and I enjoyed chatting to and getting to know the other group members. At the end of the walk there was time for a welcome drink at the Las Palmas Golf Club house. Back at the hotel there was time for a solitary swim in the rooftop swimming pool (cold) and some reading, before joining the group for dinner in a nearby restaurant. 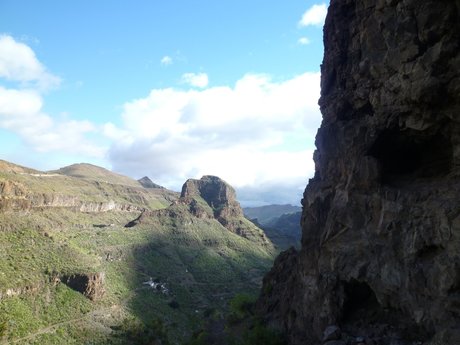 On the other side
Monday 23 January 2017
Today we were heading for the southern, drier half of the island. We set off at 9 am and after an exciting drive which included negotiating tight hairpin curves, an unusual sight of camels, and green oasis(es?) full of wonderful palm trees. our minibus dropped as in the village of San Bartolome de Tirajana. The morning chill soon gave way to gloriously warm sunshine as we walked down the valley and then up to the pretty village of Santa Lucia. Here we stopped for lunch before continuing the walk through the arid mountains on our way to Fortaleza. The vegetation was quite sparse here - lots of prickly pear and other cacti. However, as we reached Fortaleza, palm trees suddenly made a welcome appearance. One other noteworthy tree we spotted (thanks to our eagle-eyed leader, Gustav) was a pepper tree. The identification was verified by chewing the pink pepper corns and we lived to tell the tale!
Our minibus was waiting for us in Fortaleza and took us to a view point high above a near-empty reservoir and dam. From there it was a short walk to another highlight of the day, a cave, or perhaps better described as a hole through which we could walk to emerge on the other side from where we enjoyed even better views.
This walk was quite tiring, mainly because for a while it was quite warm and quite a few of us dozed off on the drive back to the hotel. 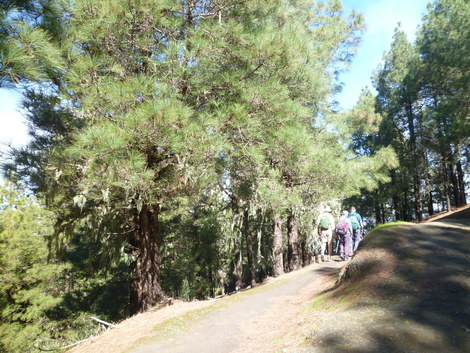 Walking through lovely pine forest
Tuesday 24 January 2017
Today's walk started high up in the central mountains of the island. The minibus dropped us off at Cruz de Tejeda and we took our time to absorb the stunning views across the mountains and valleys towards the coast and as far as Mount Teide on the island of Tenerife. This was an unmissable photo opportunity and, despite the cold mountain air and stiff breeze, we assembled for an impromptu group photo before descending slowly through pine forests and shrubs with further fantastic views. By the time we stopped for lunch we had warmed up sufficiently to discard jackets and fleeces. Birds and buzzing insects shared our space among the fragrant vegetation. Of course, there's nothing like eating a ham roll while observing a grasshopper! After lunch we continued walking in pleasantly warm sunshine towards today's destination, the beautiful town of Teror. We had time for a drink and a quick walk to the interesting church but I could have done with an extra half hour to explore further.
Back in Las Palmas I went for my first swim in the sea! It was freezing cold but quite enjoyable, in a masochistic kind of way.

Historic house in Parque San Telmo
Wednesday 25 January 2017
Much as I enjoyed the two group walks, it was nice to have a day off today so all of us could do our own thing. I chose to wander aimlessly through Las Palmas. Well, not completely aimlessly, I had a street map and chose my route to follow quieter roads and include any parks and plazas that looked interesting. I walked along mostly quite drab back streets before arriving at the lovely Parque Doramas. Soon after I found a café where I enjoyed a very cheap but tasty lunch. Refreshed I continued walking towards the district of Vegueta. My next stop was a large Public Library in an impressive building - I really only stopped to use its toilet but decided to relax for a few minutes in the reading room in a comfy armchair, pretending to read a Spanish newspaper. Soon I passed the pretty Parque de San Telmo and then strolled along an elegant street full of tourists and shoppers. At last I reached Vegueta, which is a district within the old walled town and is the location of the Casa de Colon (a former governor's house, visited by Christopher Columbus) and the impressive Santa Ana cathedral as well as several other historic buildings. I spent a good hour in the Casa de Colon, which is now an excellent museum dedicated to Christopher Columbus' travels. The cathedral was next on my 'must see' list but as I couldn't find the entrance I decided to start walking back, stopping only for a coffee and slice of apple cake. This definitely wasn't a day off! Don't know how many miles I walked but Las Palmas is a large city! 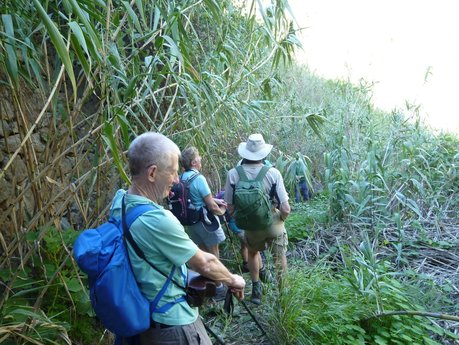 Valley below Firgas
Thursday 26 January 2017
​Today our driver dropped us off by the roadside above Fontanales from where a path led downhill to the village. We stopped for 'elevenses', making the most of the only bar we would pass before the end of the walk. What I will remember most from this walk will be, I think, the meadows covered in yellow flowers, views to the coast and as far as Las Palmas, 'finding' an orange tree right on the path (perfect for instant refreshment), an exciting, if slightly scary, walk underneath an overhanging rock face with a steep drop on the other side, and then reaching a fertile valley where sugar cane was growing abundantly. There was even a little stream at the bottom of the valley - the first stream I'd seen on the island. This was followed by a steep uphill walk which took us to the small town of Firgas. I was particularly looking forward to this town as it boasts amazing fountains and water features. However, I was left slightly disappointed because the reality didn't quite live up to my expectations. With hindsight it was probably a mistake to look at images of the sights before getting there. Moreover, our group seemed desperate to visit the bar - which meant that there wasn't any time left to explore before it was time to get on the bus. (Yes, I could have given the bar a miss and explored instead, but was quite thirsty myself!) 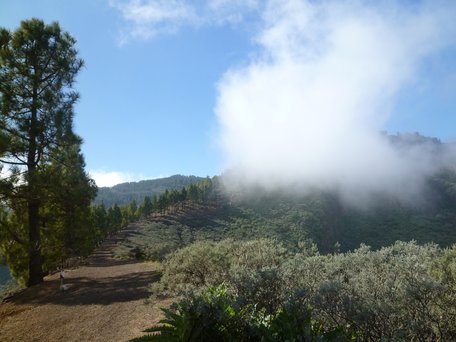 Caldera de los Marteles
Friday 27 January 2017
​Can't quite believe that this is the last walk on this holiday already. It turned out to be a walk of two halves. Before we started walking we stopped at the Barranco de Guayadeque information centre where we learnt how the early islanders lived. The excellent displays included models of cave dwellings and their inhabitants and also informed us of the fauna and flora of Gran Canaria. Even today some people still live up in the caves (with mod-cons).
Soon we reached the start of the walk. Here a fascinating restaurant/bar/café is built into the hillside. Walking through the restaurant was like exploring a cave from chamber to chamber. It is certainly different from any other restaurant I've ever visited. We had time for a cortado before setting off on the delightful walk up the canyon past almond blossom and prickly pear and then through a tall fir tree grove. We stopped for lunch at the top of the Caldera de los Marteles as the mist started to rise. The second half of the walk promised exhilarating views as we descended to the village of Tenteniguada. Alas, we walked through thick fog and even drizzle at the end. Nonetheless I enjoyed the walk, zigzagging downhill in the eerie atmosphere.
Back in Las Palmas the sun was shining and I took the last opportunity for a swim in the sea.
Saturday 28 January 2017
Just enough time for a morning walk along the busy Playa de las Canteras before getting on the bus for the airport transfer. The week has come to an end and it is time to return to the English winter, dreaming of another escape next year but also looking forward to some exciting spring and summer walks in England.
Click here for more photos from this holiday.