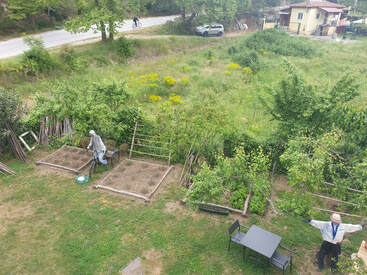 Hotel Liotopi garden view from my balcony
Saturday 14 May 2022
Leaving the Sithonia peninsula behind, the scenic drive took us uphill, across hilly and forested eastern Halkidiki, before descending via some dizzying hairpin bends to the quiet coastal resort of Olympiada. Mask wearing was still compulsory on Greek transport so we were all glad to step off the bus and breathe some fresh sea air. Loulou, the Liotopi hotel owner, was there to welcome us, while her right-hand man, Marcel, took care of the luggage. Rod, who went to the airport to collect Liz and Sue (joining the holiday for the second week) arrived almost at the same time. We were then treated to some delicious home made pastries and refreshing drinks before Rod took us on a short stroll along the main street to acquaint us with the small town. First impressions: the small family run hotel and seaside town location are such a contrast to the flashy, self-contained hotel complex in Sithonia that this feels like a brand new holiday and I can't wait to get exploring. 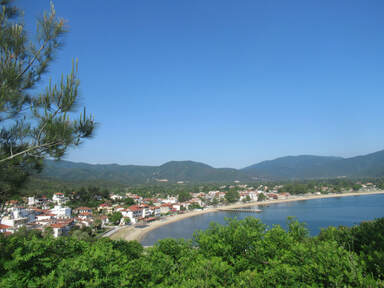 Olympiada - view from Old Stagira
Sunday 15 May 2022
This morning we walked to Old Stagira, the birthplace of Aristotle, the famous Greek philosopher. Only ruins now remain of this fascinating old town. Demetrios guided us around the site and entertained us with his anecdotes. Oh, and I spotted the first wild tortoise of the trip! It really is a wonderful site, not just because of its historical interest, but also its location on a hill top. We were rewarded with fantastic views of the rugged coastline, beaches and forested hills of the Strymonian Gulf on one side, and of Olympiada, its harbour and wide sweeping bay on the other side. Having had our fill of historical facts, we were then joined by Hara, a local botanist, who pointed out the herbs, flowers and shrubs that grow here and informed us of their medical and therepeutic benefits. We walked through a shady woodland area first and then along a beautiful coastal path, which took us back to Old Stagira.
In the afternoon, Julie and David, who were put in charge of the walk to allow Rod to have a much needed rest, led Richard and me up a hill on a forest track to a viewpoint above the town. Highlight for me was the sight of a couple of beautiful lizards and another tortoise! We also saw lots of beehives and buzzing bees and passed a spring. The temperatures seem to be a bit higher here than in Sithonia so I am looking forward to a swim tomorrow! 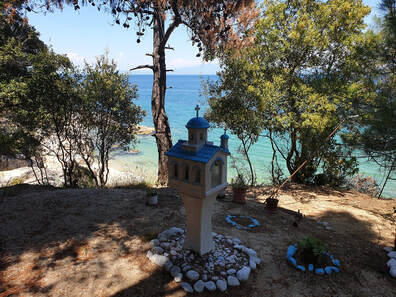 Above Diavorvoro Beach
Monday 16 May 2022
It seemed to get a little bit hotter every day and that's probably why today's walk felt to me to be the most strenuous of the holiday so far. Much of the walk was on forest tracks - thankfully more down than uphill. This area - the Mamari Peninsula - is part of an extensive nature reserve. The forested hills we walked in were the ones we looked across to from Ancient Stagira yesterday. I was very happy to see more tortoises. I love these strange creatures. By lunchtime we arrived at the beautiful Diavorvoro Beach. Here we had time for a swim and picnic lunch. The swim in the clear waters of this lovely beach was so refreshing and for me the highlight of the day. Good to see that Richard also braved the waters. After eating the picnic lunch it was time to continue the walk, first along the beach and then uphill on a steep narrow path which returned us to the forest track. We enjoyed some nice views of the coastline and a mussel farm before the track took us downhill again, past some lonely fishing boats and huts. We've reached another beach and walked on the sandy seashore. I felt like a beachcomber on a deserted island, scanning the sand for treasure among the flotsam and jetsam and the sea for any sort of wild life. Eventually we left the beach to reach a road and I think we were all very happy to see our minibus and driver waiting to take us back to the hotel.for us. 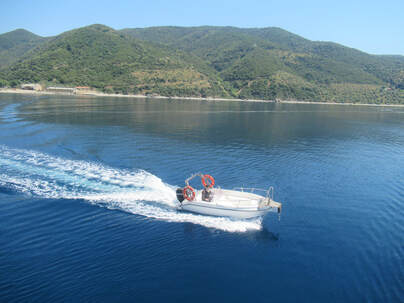 The Monks of Mount Athos
Tuesday 17 May 2022
​        Today we had a bit of a rest from walking and were driven to Ouranopoli, the ancient gateway town to the Mount Athos peninsula, a sacred site in the Greek Orthodox church. Here we boarded a ship for a cruise alongside the mountainous coast for good views of the monasteries built at regular intervals all the way down to the imposing Mount Athos. Sadly, I missed seeing the dolphins, spotted by Julie and David - I was on the wrong end of the ship! I did, however, get a good view of the couple of monks, who arrived at our ship in a small motor boat to exchange some goods. Back in Ouranopoli we lunched al fresco at a harbourside taverna and then a few of us walked to the Mount Athos border. There's a sign there, next to a ruined monastery, stating that this is as far as ordinary people can go. Only monks are allowed to enter further into the peninsula. I was excited to spot a very strange snake that looked like a very big fat worm! Back in Ouranopoli our roomy coach was waiting to take us back to Olympiada. 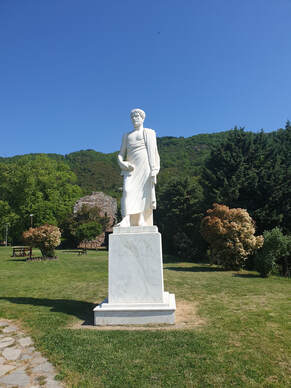 Statue of Aristotle
Wednesday 18 May 2022
​        ​Thunderstorms were forecast for later today but there was not a single cloud on the horizon when we were driven to New Stagira. Here we spent a little bit of time in the Aristotle Park, sharing it with a group of excited school children. The park is located on a hillside and there were some interactive experiments to have fun with and a statue of the great man, as well as a nice view towards the sea. Then we started walking along 'Aristotle's Way' - this is a 23 km path linking New Stagira with Aristotle's place of birth in Old Stagira. After walking uphill to the top of a ridge the path continued on forest tracks through some lovely chestnut and beech woodland. For a while it felt like walking in the Chiltern Hills - except for the numerous tortoises we spotted! Then we followed a broad track downhill. It would have been quite nice to follow Aristotle's path all the way but I guess that would have been a bit too far for our group to complete in one day. Some clouds were now bubbling up but we made it to the rendezvous point with the coach and driver before the wind and rain arrived. Right at the end of the walk we were excited to see a cute little baby tortoise. Its mother was there too but then left the baby and disappeared into the shrubbery! That made it twelve tortoise sightings today.
Later in the evening the storm arrived and the sea became very choppy. The fishing trawler had to return early - which meant very fresh fish for our dinner! 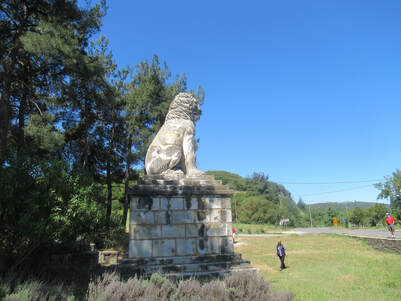 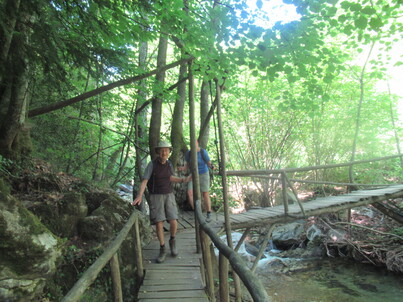 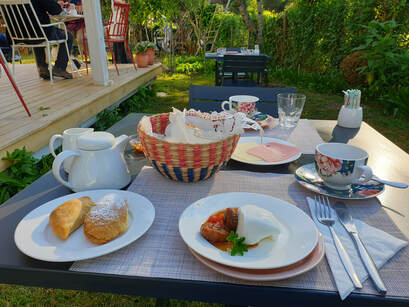