The Great Stones Way is a long-distance path, opened in 2014, linking the prehistoric sites of Barbury Castle and Old Sarum. To link with transport I started the walk in Swindon and finished five days later in Salisbury. The distance of the official route is only 36 1/2 miles but that doesn't include the Avebury and Stonehenge loops. Accommodation options have to be considered when planning the walk as these are limited in the central section. The area is, however, served quite well by buses, which means that the route could be completed as a series of day walks. 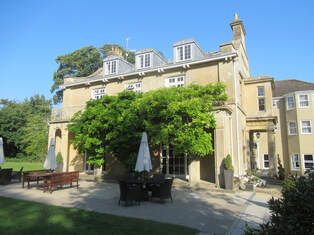 Chiseldon House Hotel
Swindon to Chiseldon - 21 September 2020
This first section was all about easing myself into the walking week and getting used to carrying a backpack. The pack was heavier than expected - probably because I had to pack waterproofs and an extra jumper in anticipation of the sudden drop in temperature, wind and rain, forecast for later in the week.
So I set out from Swindon train station in hot weather. I hadn't realised that the old town was on a hill!  It was quite hard going and I almost wished I'd taken the bus to Coate Water. However, I had plenty of time and soon enjoyed the walk as I wandered along the lake in Lawn park and continued on the cycle path to Coate Water Country Park.  Here there was a cafe and toilets. I was tempted to join the socially distanced icecream queue but thought it better to ease my load by drinking the tea I prepared at home. After a short rest, watching the seagulls, swans and ducks on the lake, I continued walking soutwards, soon crossing the M4 on a monstrosity of a concrete footbridge. The path then went uphill, past grazing sheep and through woodland and meadows to Chisledon. I stayed at the lovely Chiseldon House Hotel. After dining on the terrace (Wiltshire sausages and mash) while watching a local line dance group practising their moves I retired to my luxuriously large room. 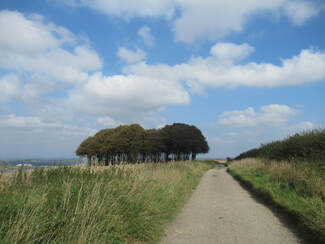 On the Ridgeway
Chiseldon to Avebury - 22 September 2020
Nothing like a good night's sleep and nutritious breakfast to put a spring in the step and make the world a beautiful place! I left the hotel in excellent spirit, ready to embrace the journey ahead. At first, the walk on an old railway path (also a national cycle route) headed south, parallel to the A346, before turning westward, slowly ascending towards Burderop Down and Barbury Castle. It was great to be on top of the Downs, views opened up all round, though the haze reduced visibility somewhat. After a tour around the impressive Barbury Castle hill fort, I stopped for a drinks and nibbles break in a sheltered spot. From here, the Great Stones Way follows the Ridgeway all the way to Overton Hill. I walked briskly towards Avebury, detouring just a little to check out the Hackpen Hill White Horse. Trouble is, to see the horse in its full glory I would have needed to walk a long way down (and then up again ) so I made do with the short walk to a couple of areas of white chalk, which I guess were part of the horse - no idea which parts! This White Horse is one of eight dotted around Wiltshire and maybe one day I'll walk along the Whitehorse Trail to see them all.
The clouds now gathered but the rain held off. I left The Ridgeway and followed the Wessex Ridgeway into Avebury. My B&B was located in Avebury Trusloe so I had a bit more walking to do. I considered stopping for dinner at the Red Lion before continuing to Trusloe but decided to book a table for an hour later so I could first freshen up and deposit the backpack.  At the Red Lion I chose the Hunter's Chicken - delicious! It came with fries, salad and garlic bread and I had absolutely no problem leaving a clean plate! The walk back to the B&B was in complete darkness - with only my mobile phone light helping me navigate the footpath.  ​ 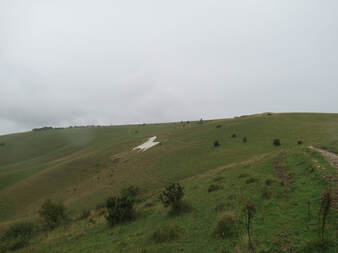 The Alton Barnes White Horse
,Avebury to Upavon - 23 September 2020
Left my B&B after a tasty vegetarian cooked breakfast, surrounded by crystals and chatting to my friendly host, to return yet again to the World Heritage site of Avebury. Having had a good rest I was now ready to admire the stone circle. Unfortunately the weather today was not so good hence I was not inclined to take too many photos. I left Avebury to a light drizzle and at first followed the infant river Kennet, passing close by Silbury Hill and then left the trail for the short walk up hill to the impressive West Kennett Long Barrow. I rejoined the Three Stones Way at Overton Hill, having completed the Avebury Loop and after walking through the village of East Kennett it appeared that I left civilization behind as I didn't see another human being for many hours and miles. I guess that wasn't too surprising as the weather gradually got wetter and windier as I climbed steadily uphill on a track to Larkeley Hill and then continued along Wansdyke - a long, linear earthwork, built by the Saxons. Thankfully, there were plenty of sheep to talk to! Despite the weather, I decided to leave the main trail and continue on the Wansdyke to follow the Alton Barnes White Horse loop. Now that I was on top of the Pewsey Downs I started to really enjoy the walking. The rain stopped when I turned the corner and I even got a good view of the White Horse. Soon I even spotted some other walkers!
Soon it was time to leave the lofty heights and walk down to the familiar territory of Pewsey Vale by the Kennet & Avon Canal. I met Sally from London as I was consulting my map and we walked together to Honeystreet where we had tea and cake at the covid-secure cafe, talking about our outdoor adventures. By now it was 4.30 and I still had many miles to walk so I set off quite briskly along the canal towards Pewsey. It wasn't raining anymore but the sky was dull and grey - I now just wanted to get to Upavon as quickly as possible. At Ladies Bridge the trail at last headed south again. I was back on the White Horse Trail route. The light was already fading when I arrived in the village of Manningford. That, plus fatigue, was probably why I missed turn off into a hedged path. I arrived at the main Marlborough to Salisbury Road and idly checked the bus timetable at a stop - not expecting there to be any buses at this time but, miraculously, a bus arrived just at this moment - going in the right direction! I waved it down and, after scrambling to find a face mask - the bus driver would not let me on without one (quite rightly too) I got on and within a few minutes arrived at my destination. It's been a long day and I'd acquired a blister, so I was relieved to arrive at The Antelope. After showering and washing the mud off my walking trousers I went downstairs for dinner. I chose fish and chips and homemade apple cake (made with apples from a staff member's own tree), and felt my various aches gradually ease away.
Upavon to Durrington - 24 September 2020
to be continued 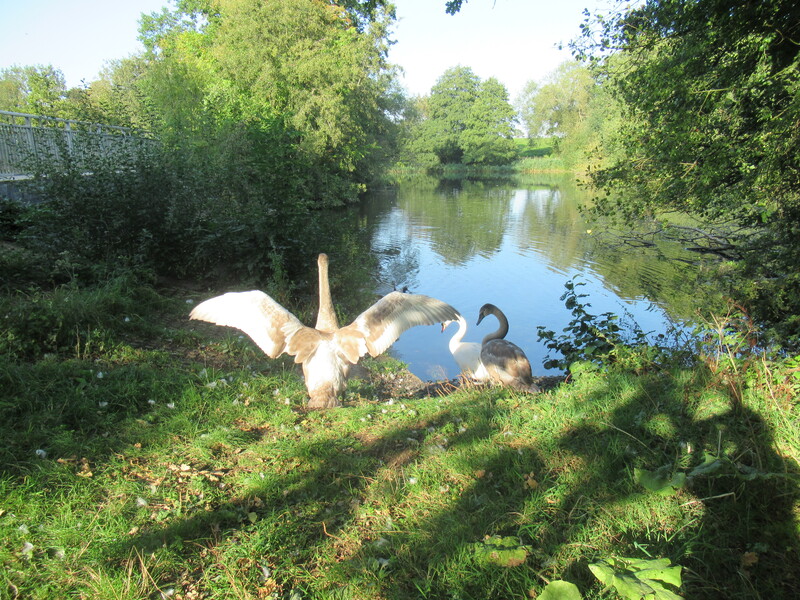 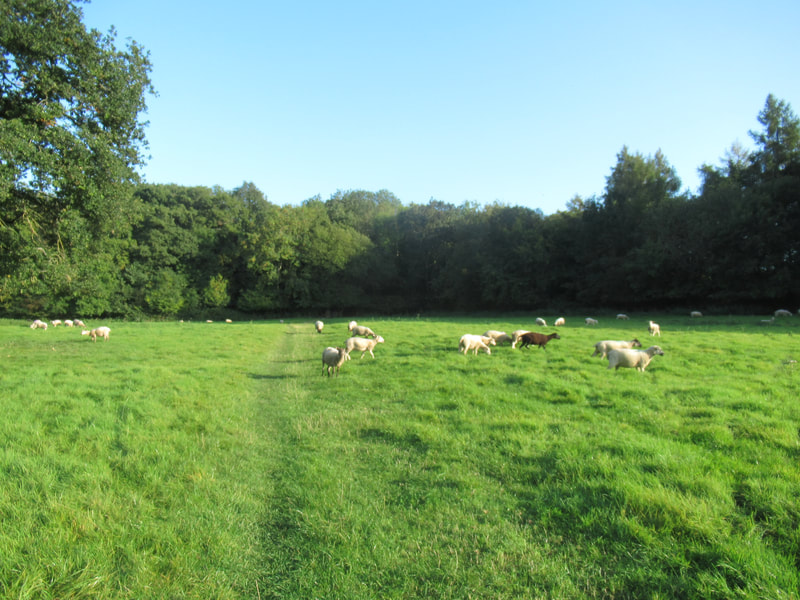 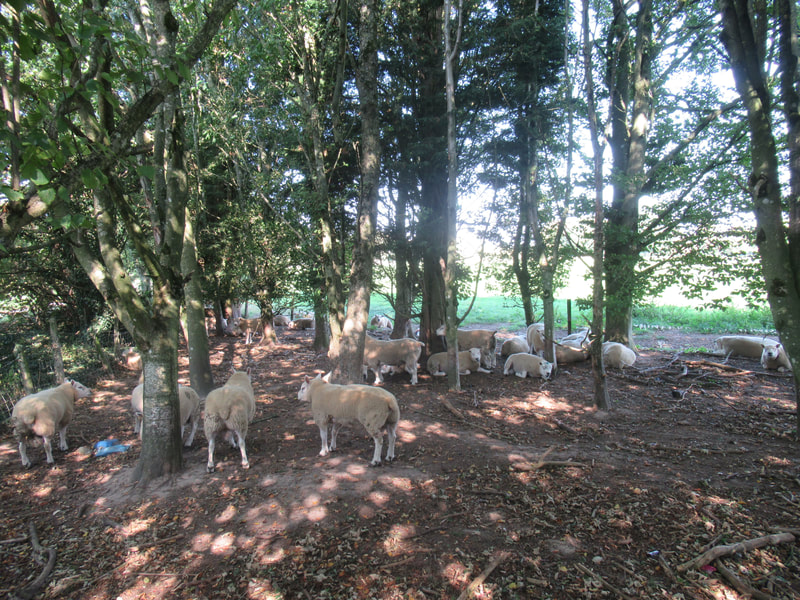 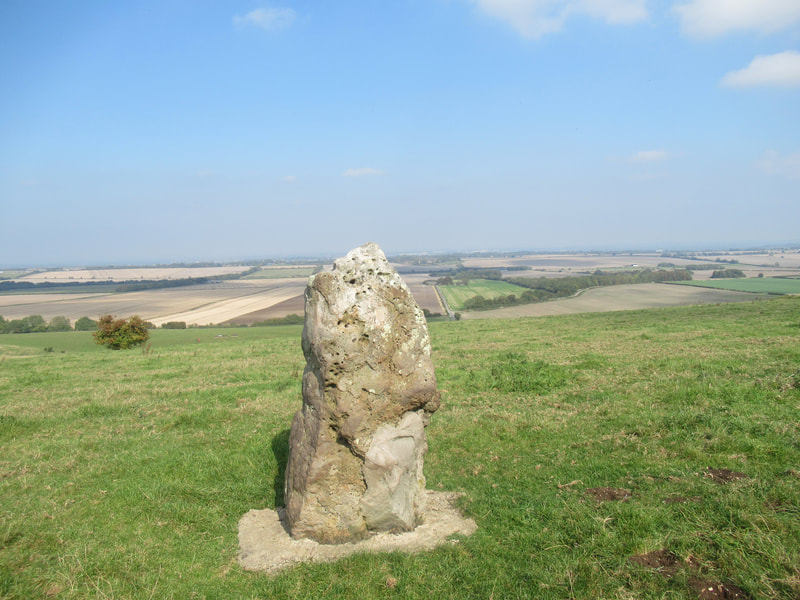 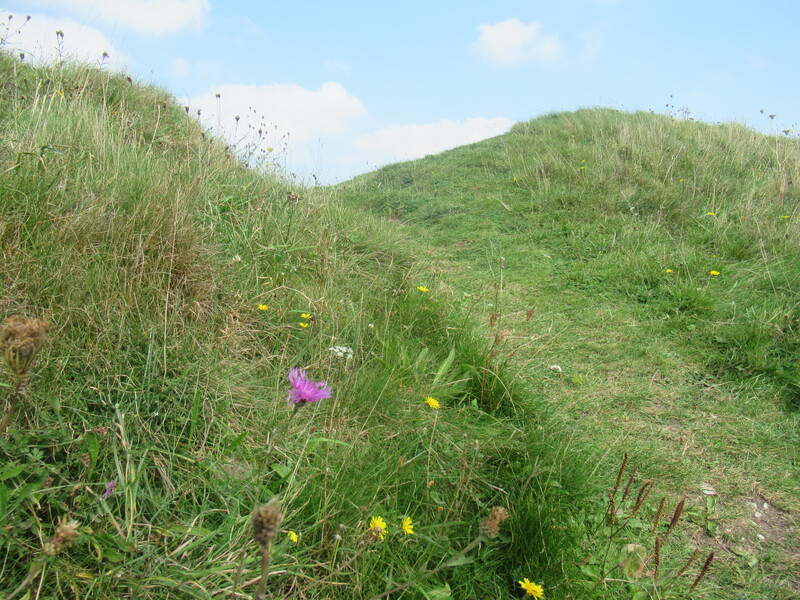 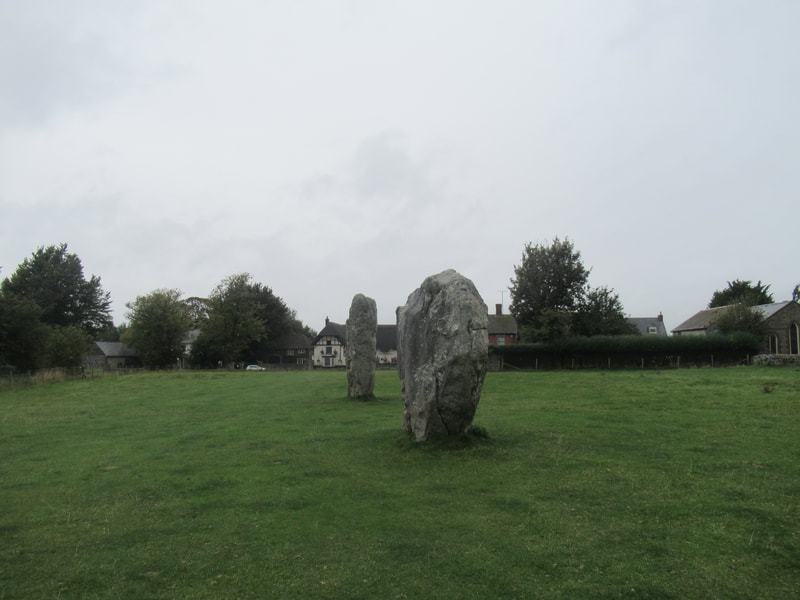 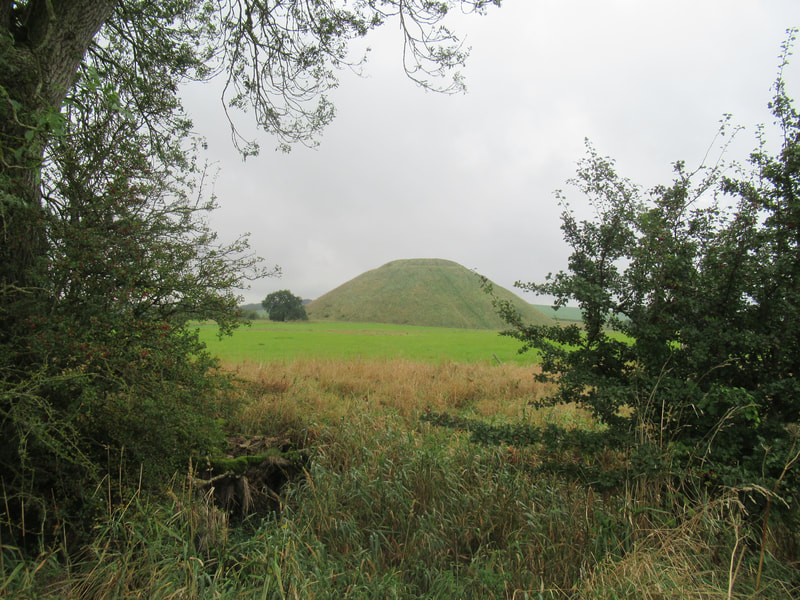 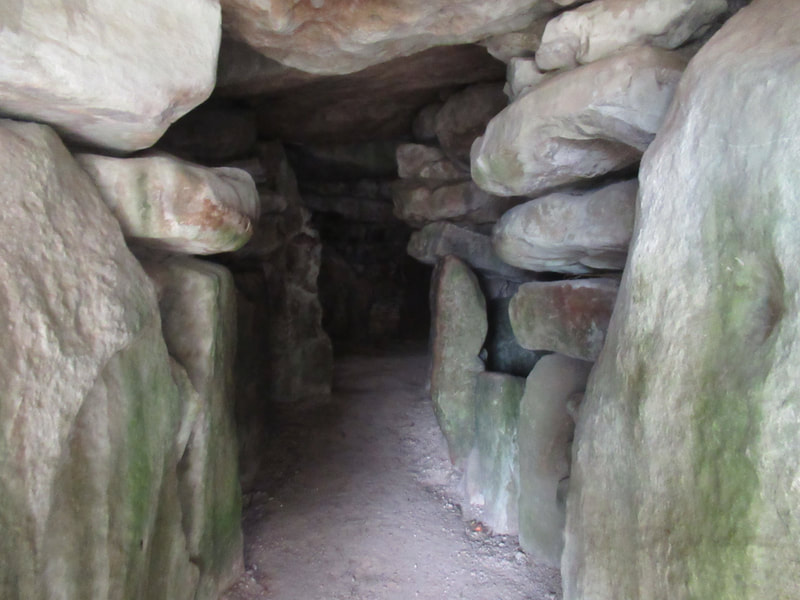 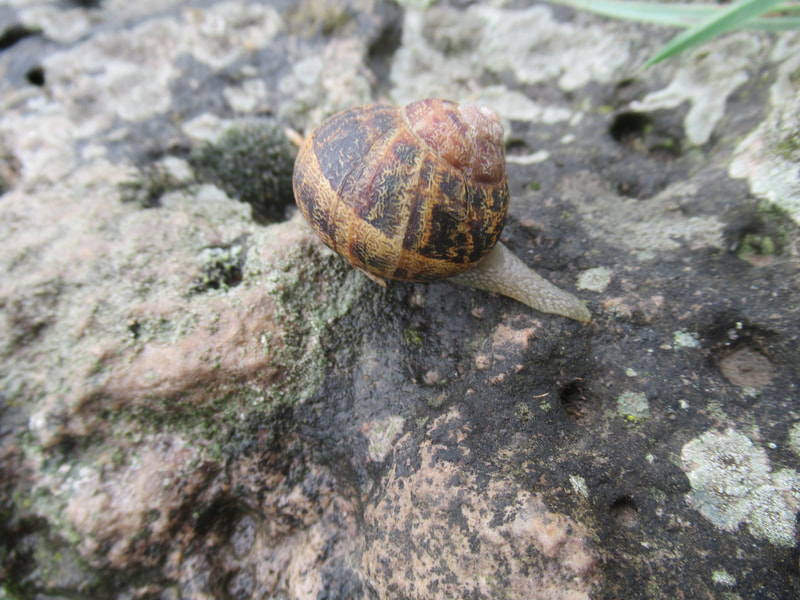 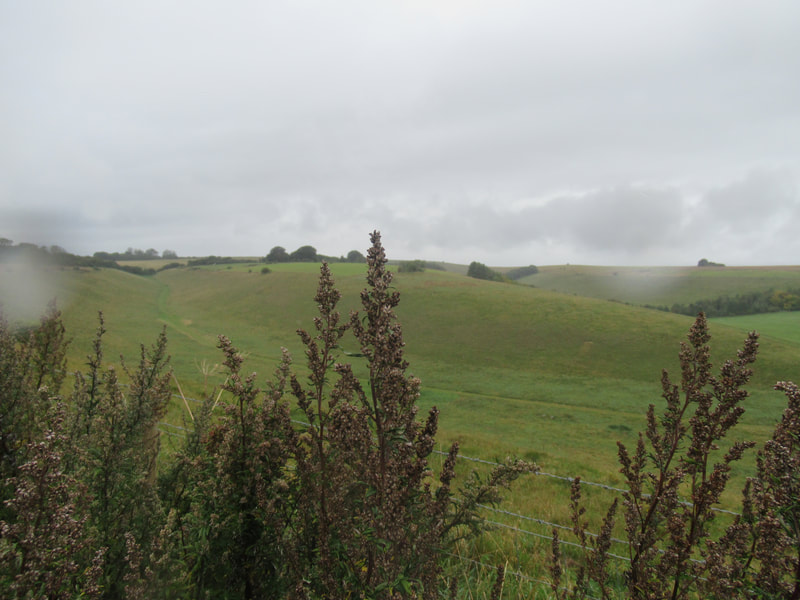 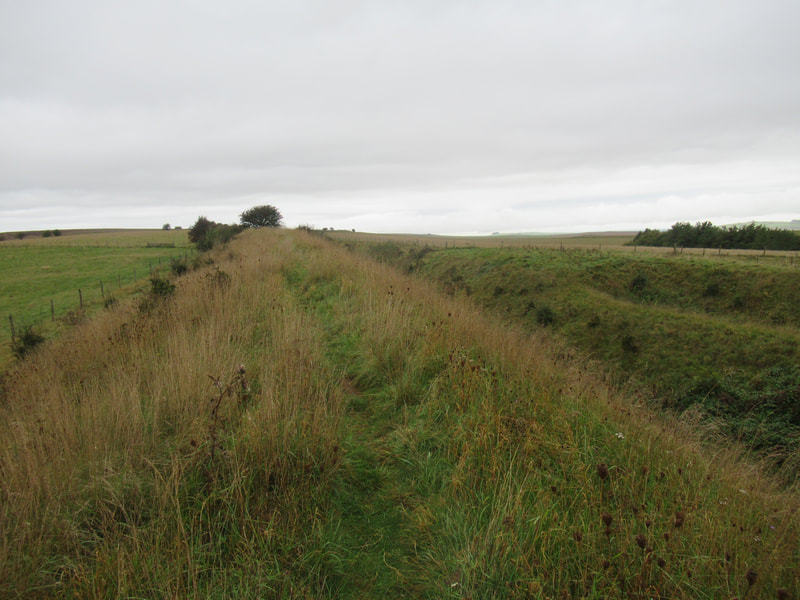 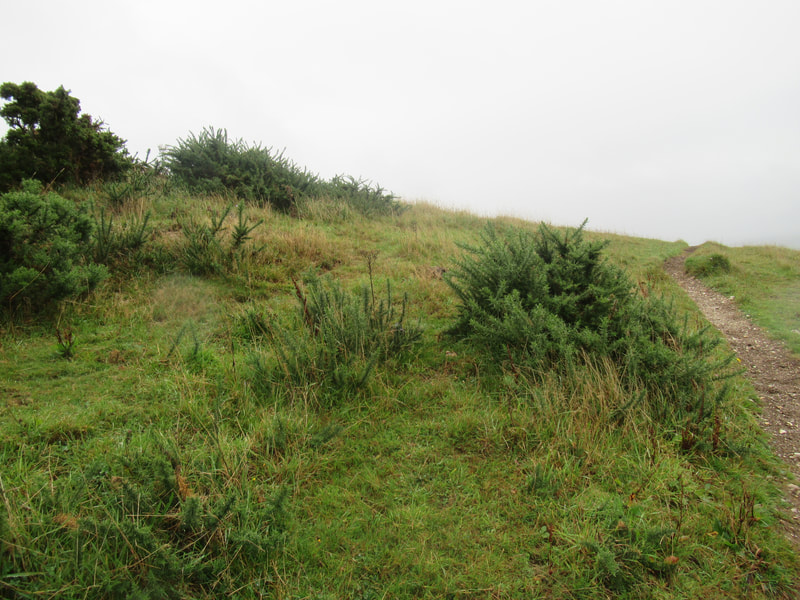 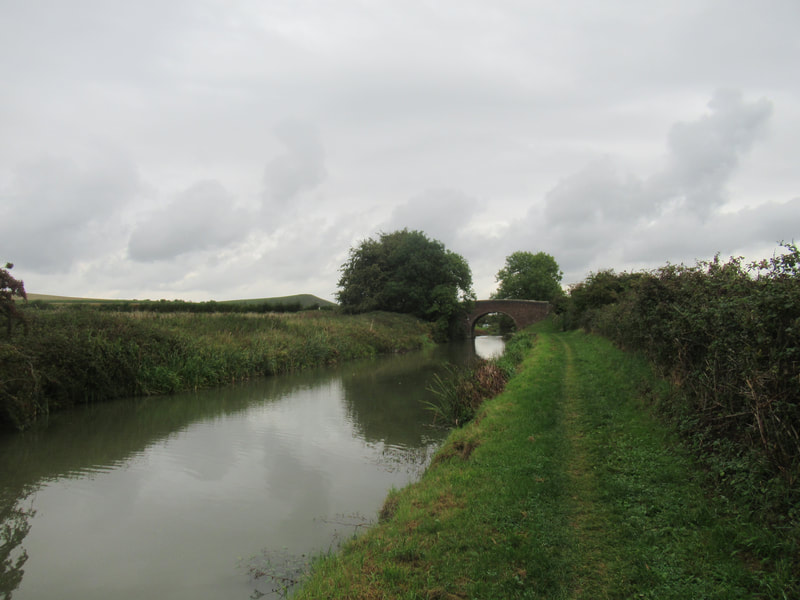 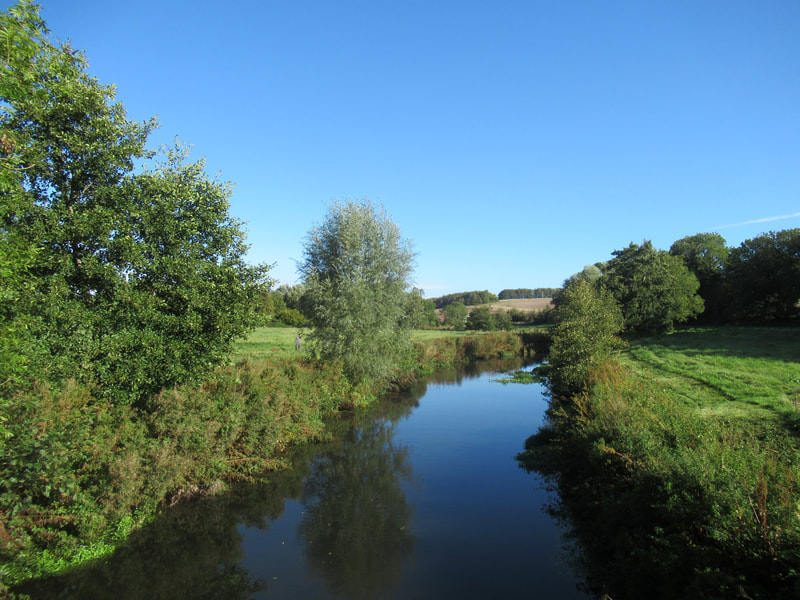 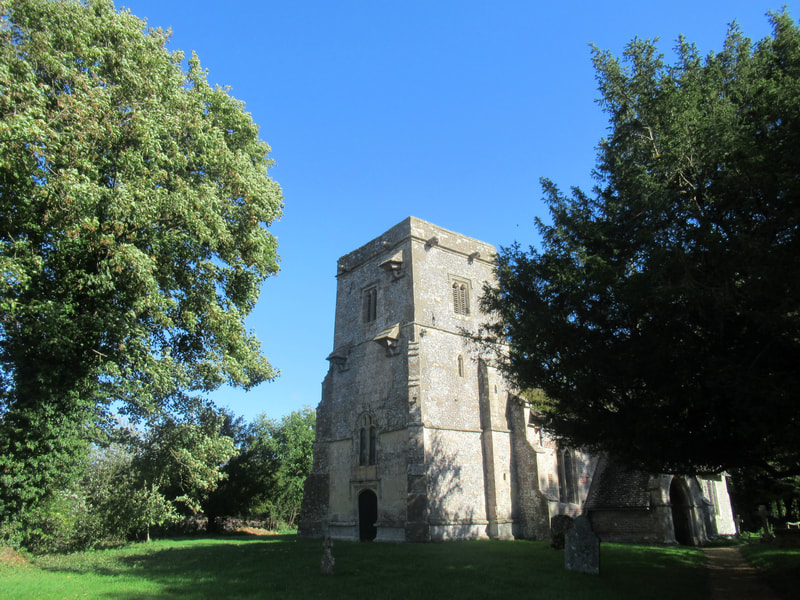 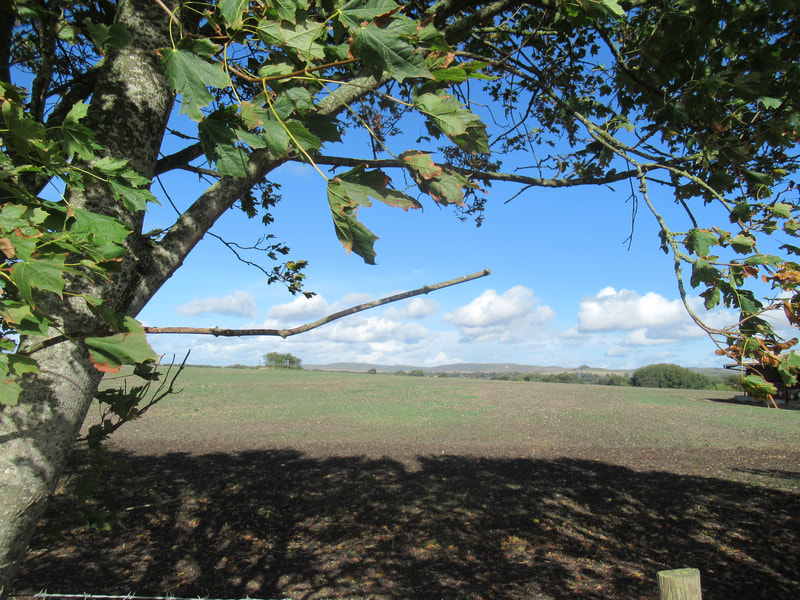 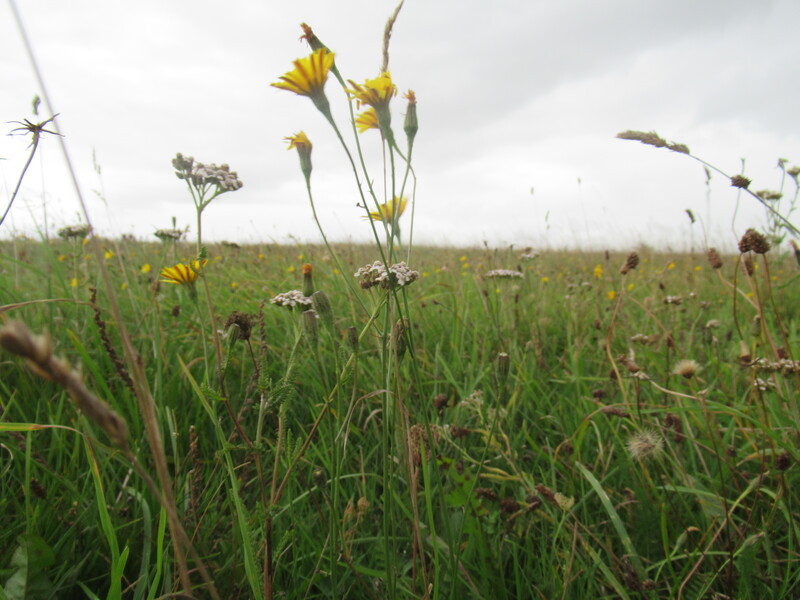 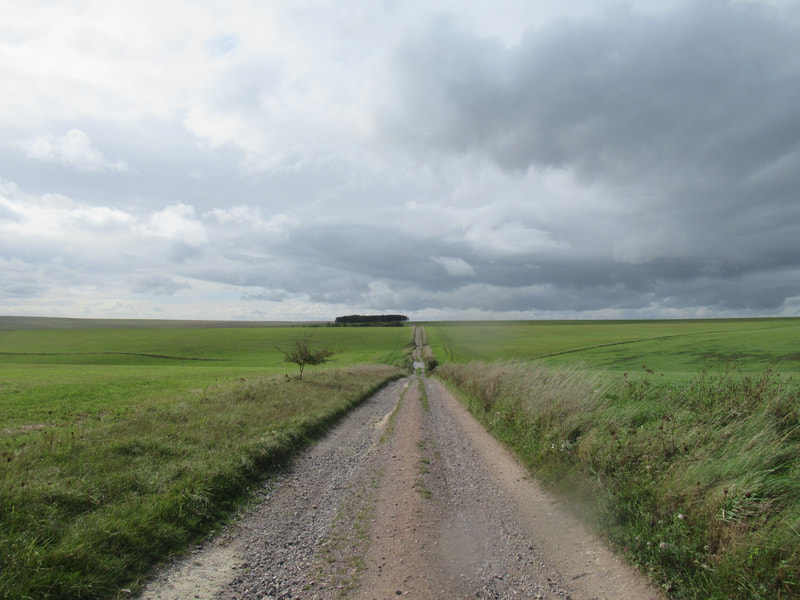