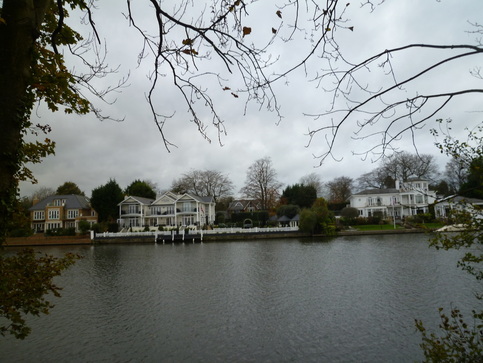 Although I would have preferred not to walk today because of the singing practice in the evening I decided to go anyway in view of the dire weather forecast for tomorrow and the weekend. To save time waiting for buses I cycled to the station.  However, any time saved was wasted on trying to find somewhere to park.  I thought that was a problem for drivers but it appears cycling has caught on in Reading.  I finally found somewhere to park my bike by the multi-storey car park on the Caversham side.
The train journey was straightforward by comparison. I changed at Slough and arrived in Windsor just before noon. After taking a few photos I crossed the bridge to Eton.  It didn’t take long to leave the tourists behind and apart from a group of ramblers who approached Eton and a couple of dog walkers I had the path to myself. The sun made an appearance and I enjoyed the peaceful stroll along the river passing under the railway bridge and then a busy road. Tranquillity was restored as I followed the river bending around Windsor Race Course on the opposite bank. I regretted now that I didn’t stop to visit a loo at Windsor as the call of nature required that I answered it sooner rather than later.  Luckily there were some trees and shrubbery nearby – I did get stung by some stingy nettles though.
I was now approaching Boveney Lock having passed the Athens bathing site where Eton schoolboys used to bathe.  I stopped for lunch near the little church at Boveney and continued along the pleasant riverside path with Dorney Lake to the right.  I was a little disappointed with the lack of a good view of the lake.  I spent a few very exciting hours on the other side of the lake in August 2012 watching team GB win three gold medals in the Olympic rowing finals.  The only disappointment on the day was that Tilehurst’s Zac Purchase had to be content with silver.  He was anything but content – he was devastated.
More interesting were the views across the river to some impressive buildings including gothic Oakley Court.  I passed the new(ish) foot/cycle bridge (part of the Reading to London cycle path) and crossed under the M4.  The light was already fading when I reached pretty Bray Lock, but I did stop briefly for a snack. The posh houses and villas of Bray (popular with TV personalities and home of Heston Blumenthal’s Michelin starred restaurant (The Fat Duck) and now also the residence of Lady Shashima (co-owner of Reading FC)) now drew my attention to the opposite bank. I quickened my pace, conscious of the fact that I needed to get home, cook and eat dinner and then cycle to Caversham for choir practice.  The next bit, the approach to Maidenhead, unexpectedly turned into a highlight of today’s walk.  The setting sun amid gathering clouds made walking towards Brunel’s railway bridge quite spectacular.  The same can’t be said of the long walk through Maidenhead to the station.  However, the people were really friendly.  Each time I looked at my map to find the best route someone asked if they could help me.  Maybe I looked like a lost tourist – do they have tourists in Maidenhead?  The train journey home was quick and easy.  Unfortunately, it was raining when I set off for choir practice.  I braved the elements anyway, returned home late, very tired and looking forward to a day off tomorrow. Nothing better than a lazy day at home when the rain is falling and you know you’ve earned a rest day.