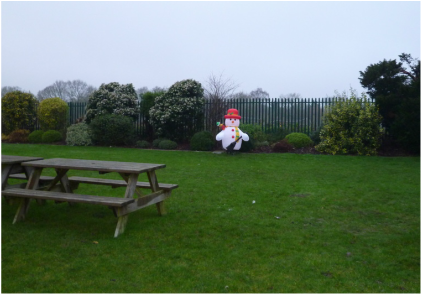 Good to be back on the Thames Path! Although the weather wasn’t brilliant (grey, misty) it was at least dry and very mild.  I bought the train ticket at the counter and got chatting to the cashier.  He recognised my accent and explained that he spent a lot of time in the Interlaken region of Switzerland (Mürren, Schiinige Platte, etc).  He even spoke some Schwiizerdütsch! It’s a small world.
When I arrived in Maidenhead I decided to walk through the town centre and stop at a rest room so as not to get caught out again later! I went into Marks & Spencer’s and promptly spent some money shopping (fluffy bed socks and a Christmassy sweatshirt – perfect for wearing in the kitchen while slaving over the Christmas dinner.  I then realised that I ‘wasted’ a lot of time and remembered that the reason I was here was to do a walk!  By the time I reached the Thames the light seemed to be fading already even though it was not yet 2 o’clock.  It really was a gloomy afternoon but the walking was quite enjoyable.  I passed Boulter’s Lock and marvelled at the posh riverside properties.  I’ve got a feeling that quite a few residents would prefer the path to be on the opposite bank of the river to avoid having walkers such as me peer into their back gardens.
Eventually I left the houses behind me and concentrated on the birds and the river.  Today I brought my binoculars just in case I spotted another kingfisher (that was on the Kennet & Avon Canal walk). Predictably that didn’t happen but I did watch a grey heron on the far side of the river.  The only other noteworthy happening on the river was some sort of paddle boat race.  The boats passed at quite long intervals (downstream) – they looked like a cross between canoe and rowing boat.
At Cookham the path diverts away from the river into the centre of the village.  Here I found some public toilets (very handy) and then I stopped briefly at the Stanley Spencer Gallery.  I didn’t have time to wander through the gallery but I did buy some Christmas cards (Apple Trees in Snow).  There is a memorial stone in remembrance of the Cookham born artist by the entrance of the churchyard through which the Thames Path passes before it re-joins the river.  The walking was pleasant for a little while but then it got very muddy.  I had to walk through the longer grass in order to avoid the muck.  At Bourne End the footpath the path crossed over to the other side (to Bourne End) sharing the railway bridge. This made a pleasant change to the scenery.  On a brighter day I could have enjoyed the scenery of wooded hills opposite the river in the Maidenhead and Cookham area (Cliveden NT) and later Winter Hill on the other side but it was so misty and grey that it was hard to even notice what was immediately in front of me. After Bourne End the path continued through meadows – I was again able to avoid the worst of the mud by walking through the untrampled grass. However, I couldn’t avoid all the mud and it got really bad just before Marlow.  I guess walking in the countryside in winter and especially alongside rivers will inevitably mean filthy walking boots and mud spattered clothing. In that respect I had been lucky so far.  I reached Marlow in near complete darkness.  I’d intended to locate the Swiss patisserie shop and tea room (Burgers of Marlow) but as it was already gone 4.30 and I didn’t exactly look presentable, I decided to catch the next train home and leave the tea and cake for another day.  The ‘Marlow Donkey’ brought me back to Maidenhead and I didn’t have to wait long for the train to Reading.  I did miss a bus though and had a near 30 minutes wait for the next one. That’s Sunday buses!
Today was possibly the least enjoyable of the Thames walks so far but that was entirely due to the gloom and darkness that made everything appear a little grey.  Nonetheless it was good to get outdoors.  I may repeat this section next year in spring or autumn as I know that today didn’t do justice to the beautiful countryside.  I would also like to visit the Sir Stanley Spencer Gallery again with more time to view the exhibits properly.