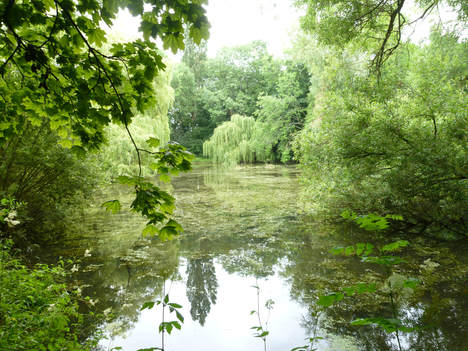 After the heatwave of late June, I was pleased that cooler and fresher weather has returned, allowing me to get back walking. Today I returned to Winchfield. I always look forward to going back to where I finished a previous section. Arriving at a location fresh and keen to get going is a different experience to arriving at the end of a tiring walk. It’s like looking at a place with fresh eyes and renewed interest. I started walking from Winchfield Station straight through the middle of the large car park - clearly this train station exists to serve London commuters. Unlike when I arrived here a few weeks ago, today it was lovely and cool – perfect for walking. However, walking along the narrow lane leading to the Three Castles Path wasn’t any more enjoyable this time round. There is no pavement, and walking on the narrow and uneven grass verge was not really an option so I had no choice but to walk on the road, facing oncoming traffic, and stepping onto the verge every time a car approached. However, apart from the inauspicious start, the day’s walk was most enjoyable.
Soon I arrived at St Mary’s Church in Mousey Row and from here the path continues pleasantly through the churchyard and then through a copse and a meadow before arriving on the Basingstoke Canal tow path by Stacey’s Bridge.
The path follows the canal for several miles. There are no locks but several stone bridges grace the route. On my guidebook’s advice, I briefly detoured to walk along picturesque Wilks Water and catch a glimpse of the impressive façade of King John’s Hunting Lodge. Back on the towpath, the tranquillity of the canal setting soon gave way to all sorts of activities. Kids were paddling in canoes, watched and photographed by proud parents on the towpath; there were dog walkers and cyclists. Then traffic from the busy A287 intruded for a while. On the plus side, I passed a pub and a café in a boat yard – unfortunately both were on the wrong side of the canal. So I kept going, looking forward to my picnic lunch at Odiham Castle. The castle was built by King John as a convenient halfway stop as he journeyed between Windsor and Winchester. The impressive ruins alongside the canal and surrounded by woodland now made for a spectacular setting for my lunch break.
Refreshed, I continued the walk alongside the sluggish waters of the Basingstoke Canal and soon reached the entrance to Greywell Tunnel. The roof of the 1125-meter-long tunnel collapsed in 1932 but the tunnel is now an ideal home for a large bat colony because of its darkness and constant, cool temperature. I couldn’t resist climbing down the steps to peer into the creepy darkness of the tunnel, hoping to spot some bats, but presumably they were fast asleep. 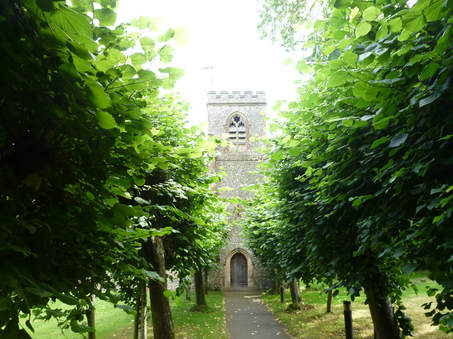 Ellisfield Church
Greywell is a lovely village with pretty cottages, a pub and even a novel use of the old red phone box (now housing a defibrillator); easily winning first prize on my best villages along the path list (so far). Soon the path left the high street and after a pleasant walk through a meadow I arrived at yet another St Mary’s Church, this one picturesquely situated by the Whitewater River. I didn’t linger long here as a large swarm of bees was buzzing around. Shortly after leaving the churchyard, the path continued on boardwalks through what I can only describe as a watery paradise (Greywell Moors) – possibly my favourite spot of the whole section. Soon however, by the old Mill Cottage, the route turns right, away from river and moorland, and uphill for a completely different walking environment. At first, I followed the road, but soon realised that I should be walking on the other side of the hedge, alongside the field edge. I managed to squeeze through a gap in the hedge and was now able to enjoy the North Downs views, big skies and big fields. At the top of the incline (Four Lanes End) the path crossed the road and continued along a track (Harrow Way) to a point where five paths meet (Five Lanes End). I stopped here briefly for a refreshment break and then walked briskly along the uninspiring broad track at first and then a grassy, hedged path to reach the road leading to the village of Tunworth. There were a few pretty cottages to admire here but the village seemed rather lifeless.
The last section of the walk took me along leafy lanes, across the busy A339 Basingstoke to Alton road at Winslade, and uphill past a herd of cows in a meadow to reach a lovely lightly wooded area. A sign informs that this is a conservation area and, as far as I could tell, it works as I’ve spotted lots of butterflies. The path continues along the edge of a Copse and somewhere around here passes the highest point of the entire Three Castles Path. Walking along here did feel quite lofty and I enjoyed the breeze as I walked along the now hedged path. Soon the track broadened and then emerged from the shrubbery at Ellisfield. After walking around the church and through the churchyard, followed by a bit more walking (uphill) along the road, I arrived at the bus stop with time to spare. If only there was a café here! I had to make do with drinking the last few drops of water from my bottle. The Cango bus arrived on time to take me back to Basingstoke. Not surprisingly, I was the only passenger getting on the bus here and the only other passengers on board were a boy and his grandfather. It worries me that so few people are using the rural buses. Already there is no service on Sundays on many routes (including this one). So thank you to Hampshire Buses to allow me (and hopefully many more walkers) to make this walk possible without the complications of organising car transport or the expense of using a taxi.