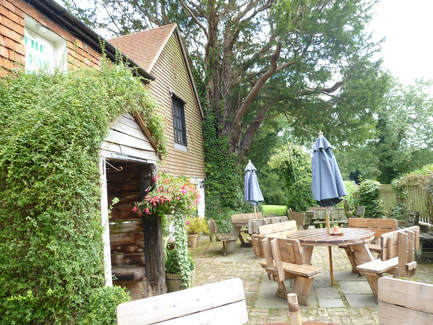 ​          Perfect walking weather and time to hit the trail. It’s been over a month since my last long walk. Where has the time gone? I really want to finish one of the five long distance walks I have started (if only so I can start a new one!) and the end of the Three Castles Path is nearly in sight. Due to transport logistics, this second last section looks worryingly long. The worry is not so much about my ability to walk the distance but will I make the last bus to Winchester?
As usual I set off walking in a happy frame of mind, glad to get going and looking forward to the adventure. I followed a variety of footpaths, hedged tracks and lanes through farmland, woodland and enjoyed some great views across the downs. This part of Hampshire is pleasant rather than spectacular and the three lovely villages, Bradley, Lower and Upper Wield, added some welcome variety and spice. Walking up and over Preston Down provided some of the best walking of the day. Possibly I was a little bit too absorbed in the views and the sheer pleasure of walking here and that was why I soon found that the route description didn’t match where I was going! Luckily my map reading skills and vague sense of direction led me to Lower Wield. I have no idea whether I took a short cut or added a detour. Before I even knew whether I was heading in the right direction, a couple in a car stopped to ask for directions to the Yew Tree Inn! I pointed them in the direction I was going but pointed out that I was not 100% convinced that this was the correct way. Shortly after I walked past the Windmill Cottage and knew I was back on track as this cottage was mentioned in my guidebook. I soon reached the Yew Tree Inn and although time was not on my side, I was now quite thirsty and decided that a lemonade and short rest was what I needed. I was pleased to see that the couple in the car have also found the Inn.
I resumed the walk refreshed and walked swiftly on the gently sloping grassy path to the village of Upper Wield. Here I briefly stopped at the 12th century Norman church of St James. It was open and certainly worth stopping for. It contained some interesting features, including a memorial to the most famous son of Upper Wield, William Wallop (MP and twice Mayor of Southampton) and a Norman Mass dial.
The path now followed an ancient path along woodland and open countryside with some lovely views over the valley below. It is a shame that more people aren’t enjoying these paths. I saw a total of four people along this stretch of several miles! The first two were a couple of walkers and the second two were young Eastern European men – one on a bike. They were studying a map so I asked them if they needed any help. They didn’t – they were just wondering why they didn’t see more people walking on what looked on the map to be an important route. That is of course a question I often ask myself. The scarcity of public transport and the reluctance of car owners to stray far from the car park may be one answer. 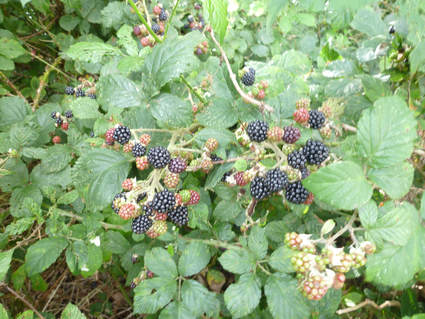 After passing Bugmore Hill there was a short stretch of road walking before a pleasant uphill track led through woodland to eventually reach Spybush Lane. I was now on familiar territory as the next few miles are shared with the Wayfarers Walk and I walked this section quite recently (10 June). I moved quickly along the lane and looked forward to reaching Abbotstone Down, one of my highlights back in June. This time, however, the vegetation had lost its early summer freshness and I was left a little disappointed. It occurred to me that walking several long-distance paths concurrently makes a lot of sense as not only does it prevent boredom but it means that each walk section is quite different from the previous one. Each season has something different to offer and the scenery can change quite dramatically. Today I walked through harvested fields, and munched on blackberries while last time the spring flowers were at their best and I enjoyed a taste of wild strawberries.
What I like best is walking on a path I have never walked before and so the broad track into Abbotstone proved quite tedious. The cows and the river Candover provided some welcome distractions but that was followed by the hedged path to the top of Itchen Stoke Down and then all the way down to the Winchester-New Alresford road. There were occasional gaps in the hedge to provide a view and the hedge did provide some welcome fruity refreshment as the long day started to take its toll. The walk became a bit of a slog as I needed to get to the bus stop in Itchen Abbas by 5.15. I am pleased to report that I made it with 10 minutes to spare and travel home was quite straightforward.
My highlights:Wildlife:Useful information
Transport:  Refreshments: Public Conveniences
Continue to Section 6 (Itchen Abbas to Winchester)
Click here for more photos from this walk