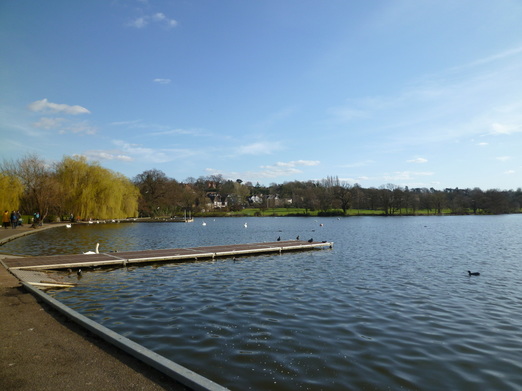 It is Good Friday. The sun is shining and it promises to be a beautiful day. I woke up late, having had a busy week in the office, and then there was the end of term choir performance last night. I planned to have a quiet day at home, maybe doing some much needed tidying up in the garden. But the weather forecast tells me that Friday will be the best day of the Easter weekend with the rest more or less a washout, so I decided to go walking. I struggled a bit trying to decide where to go, and eventually plumped for a return to the Capital Ring (reduced train frequency and non-existing rural buses on this bank holiday helped make up my mind). I left Reading late, missed a direct train to Clapham Junction, so, rather than wait nearly an hour for the next one, I got on the fast train to Paddington, then underground to Balham. It meant retracing my steps for a while but I didn't mind as I got another chance to walk along the beautiful pond in Wandsworth Common.
With the weather absolutely gorgeous, the air fresh, and the city cleansed after last night's rain, I put on my sunglasses and started walking with a spring in my step and a smile on my face. Wandsworth Common seemed to be much closer to Balham High Road than I remembered. The pond was beautiful and it was good to see so many families with small children enjoying a day in the park. Leaving the park I briskly continued walking, conscious that it was already gone two o’clock and I had a long way to go. I passed Wandsworth Prison and then after some road walking entered the huge Wandsworth Cemetery, which not only contained conveniently located public toilets but also a path running through the length of it parallel to Magdalen Road, the official route to Earlsfield. I’m not sure if it is right to say you enjoy walking through a cemetery – after all so many people are buried here, but it felt very peaceful, the birds were singing respectfully. I’m glad there weren’t any parakeets or magpies around to shatter the peace.
Leaving the cemetery I arrived in lively Earlsfield before the path zig-zagged its way along largely quiet roads and a recreation ground to affluent Wimbledon. Wimbledon Park was great. From a viewing platform there were views of the ‘Shard’ and other skyscrapers and I think I also recognised the arch of Wembley Stadium. Visibility was much better today than on the last walk. As I walked along the lake I could see the Centre Court on the other side and I can well imagine that for two weeks in June this park will be heaving with people as this area will be the centre of the tennis world. I sat down on a bench briefly, eating my lunch while watching children feeding the ducks.
Next up there was a bit more road walking as the road went uphill past some Wimbledon practice courts and impressive houses towards Putney Heath. The next few miles were pure joy. First the wooded heathland, followed by the strange windmill and a welcome cup of coffee and cake in the Wimbledon Common café (with handy toilet) and then the steep(ish) downhill path to the delightful Queen’s Mere. This is a large pond surrounded by mature trees – according to my guide book it was a favourite retreat of the Wombles (in Elizabeth Beresford’s books). The path didn’t follow the lake but went steeply uphill through the woods again to reach an open plateau, crossing a golf course fairway and then continuing through heath and woodland before heading downhill to reach a World War I memorial. I was now leaving Wimbledon Common and Putney Heath behind and was briefly reminded that I really was in a city as I crossed the busy A308 at Kingston Vale. It was not long however before I entered Richmond Park. I am amazed that I’d never been here before as it is a really wonderful Park. First the path led uphill through grassland towards a lofty woodland and then across to the lovely Pen Ponds. It was now nearly 5pm but there were still a lot of people about. I saw several herds of deer and absolutely loved the walk here. It seemed to just get better and better and the adjoining Petersham Park was possibly the highlight. From here there were great views westwards – Windsor Castle was just about visible in the distance, so was Heathrow Airport and apparently the top of St Paul’s Cathedral can be seen on the other side through a gap in the trees. There are lovely gardens here as well, history to explore, and a cafeteria to visit, but I didn’t have time for any of that. If only I’d got up a couple of hours earlier… !
The sun was setting now and I made my way downhill, past another couple of grazing deer, to Petersham and to soon afterwards join the Thames Path for the walk into Richmond. Here people were having a good time enjoying the lovely evening outside, eating, drinking and listening to music. The Richmond riverside is just so beautiful and I’m looking forward to returning for the start of the next section.
This was the most beautiful of the Capital Ring sections so far, possibly helped by the most wonderful spring weather. I never once felt tired or foot weary. Maybe I am becoming accustomed to walking ten miles or so in an afternoon. The return journey was not too bad either.