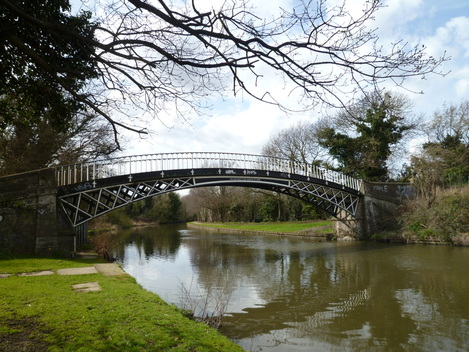 Well, thanks to Storm Katie, the mud and puddles have made a spectacular return and if I was going to walk today (the last day of the Easter break) then it would be another Capital Ring section. The weather looked promising so here I was, off to London again. Travel to and from this section was easy but I felt strangely lethargic when I started walking in Richmond. When I arrived here last Friday the town had an infectious buzz about it which was missing today – obviously the difference between a beautiful bank holiday evening (with a long weekend ahead) and a normal working day.
So I started ambling along the first part of the walk: the Riverside Walk. I soon reached Richmond Lock where the path crosses to the other side of the river over the ornate footbridge. From here to Brentford the Capital Ring Walk shares the route with the Thames Path. Could it be that repeating a section that I walked not so long ago curbed my enthusiasm? I was constantly distracted by the planes descending above me to shortly land at Heathrow. The walk itself felt rather déjà vu – but at least this time I had no problem finding the way through Isleworth. In Syon Park I stopped for a coffee in the garden centre café and now looked forward to new territory as I reached Brentford. The Thames Path continued eastwards, while my Capital Ring walk took me in a north-westerly direction along the Grand Union Canal.
I now started the second part of the walk, the Canal Walk. Either the coffee or the new surroundings revived me greatly and I enjoyed walking now. I completely disagree with the person who said to me that walking along a canal was boring. This section offered a strange mix of sights: a modern riverside development of probably very expensive apartments, pretty and not so pretty canal boats, ducks, the huge GlaxoSmithKline building, swans, spooky underpasses, beautiful graffiti, coots and moor hens, the M4 motorway, swans, a picturesque iron footbridge made in 1820, tranquillity and noise, Piccadilly line trains rattling over a steel bridge, pretty woodland parks and lonely locks. Never a dull moment. I ate my lunch at Osterley Lock and continued along the Grand Union Canal as far as Hanwell. Here, just before a series of locks I had to leave the canal as it continued on its way to Birmingham. The Capital Ring Walk now followed the river Brent and shared the path with the Brent River Park Walk for the next few miles.
I was now walking the third part: the Urban Park Walk. It was actually really easy to forget that I was in West London. The river meandered along peacefully between trees and shrubs, with riverside meadows alongside. I hardly noticed the large Ealing Hospital, along which the route passed and apart from a couple of busy roads to cross, this section really surprised me by its continuous green spaces and birdsong. One section of the park walk, the FitzHerbert Walk, is named after Luke FitzHerbert, who worked tirelessly on the River Brent Park Walk project. He passed away in 2007. Soon I approached, and passed underneath, the impressive Wharncliffe Viaduct (designed by Isambard Kingdom Brunel) carrying Great Western trains. The path continued alongside the Brent River Park. I particularly enjoyed walking past the recreation area near St Mary’s Church and Brent Lodge Park. The church is located on top of a hill, which was the original site of Hanwell village. Here there is a lovely area for children, with an animal park and lots more. I was tempted to try and find my way around the Millennium Maze but decided against it – I was sure to get hopelessly lost. Instead I bought a take away cappuccino and a teacake in the café (there are toilets here as well), and continued walking along the river, stopping briefly for a snack by a pretty park bench. After passing a bird sanctuary (Boles Meadow), a golf course and another meadow, Bitterns Field, I reached Greenford Bridge where the Capital Ring Walk finally leaves the River Brent Park Walk. After crossing the busy road the path continues through Perivale Park. Finally, I saw an iconic London sight: not the ‘Shard’ this time, but the Wembley arch, glistening beautifully in the early evening sunshine but reminding me of last night’s football result (England 1 – Holland 2).
Leaving the park I was finally confronted by traffic on an epic scale. Thankfully there was a tall and sturdy footbridge to enable pedestrians to safely cross the A40 Western Avenue, which was now chock-a-block with rush hour traffic.
As I walked along a road towards Greenford Station, a woman leaving her house said a friendly hello to me – that doesn’t normally happen in London. I returned the greeting with a smile and it turns out I look exactly like a neighbour of hers. I have a Doppelgänger in Greenford.
Greenford Station is a small but busy station, shared by the underground (Central Line) and National Rail on adjoining platforms. As far as I could tell, the only overground train leaving from here is the train to Paddington. The station is actually situated on a hill and the tube is also overground here. The journey home was straightforward and I arrived home jut before sunset having enjoyed another interesting walk and journey.