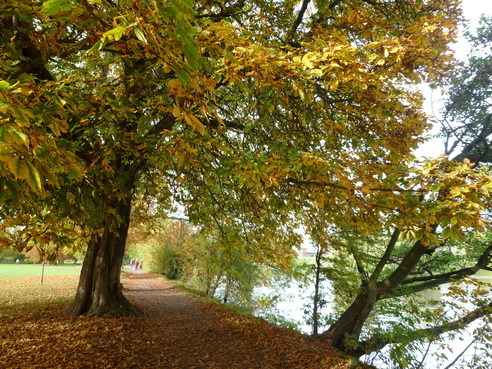 Glad to go walking again.  It’s been a tough week at work as we try to come to terms with the tragic loss of one of our professors.  He died in a fall while hiking in the Appalachian mountains, ahead of a conference he was due to attend.  The only comfort we can take from what has happened is that he died while doing something he loved.
I arrived in Twickenham and promptly got swept up with the rugby fever. I enjoyed the expectant, joyful atmosphere ahead of the Scotland v Australia quarter-final.  Is that wrong so soon after a tragic event?  My guess is that Alexei who enjoyed life to the full would be horrified at all the fuss and tell us to get a grip and carry on as before.
After taking a few photos I left the crowd behind.  There was a tedious stretch along the Twickenham streets with just a short interlude walking through Radnor Gardens.  However, that was all forgotten when I was back by the river at Teddington Lock.  Along with many locals enjoying a stroll in the beautiful Autumn sunshine I crossed the footbridge and lock.  I learnt that this is where the tidal Thames ends.  On the other side of the river I walked in bright sunshine – both the footpath and the cycle path were busy all the way to Kingston.  Just before reaching Kingston I sat down on a bench eating my lunch.  My plan was to stop for a coffee in the huge John Lewis store located right on the riverside but I couldn’t find the café.  I did find the toilets though which was more important.  I continued my walk, crossing the bridge, and following the rather dull riverside path.  A wall, fencing and shrubbery completely obscured any views of Bushy Park or the Hampton Court parkland.  I walked quickly around the long bend of the river and then stopped for coffee and cake at the Hampton Court café.  I decided to push on now and try and walk all the way to Staines.  After crossing the bridge, I found East Molesey and the riverside path towards Sunbury Lock utterly delightful.  East Molesey was a hub of interesting shops and restaurants.  There was a café (and toilets) by the lock and I would have liked to stop but no time!  The tree-lined path was delightful and I particularly enjoyed and admired the elegant houseboats and villas on the opposite bank.  The light however was beginning to fade and I began to doubt that I’d make it to Staines.  At Sunbury Lock I stopped briefly for a drink and snack and then hurried on to Walton.  The clouds started to gather now and after crossing the impressive new bridge it started to rain – well, it was just a drizzle but that, together with me losing the way briefly, plus the fact that I didn’t bring any wet weather gear, made the decision to stop the walk in Shepperton easy.  After another detour (terrible signposting) I eventually found the station.  I had to wait half an hour for the train to depart but it was waiting at the station so at least I could sit down.  I had to change at Teddington and had another half hour wait.  On the train I was joined by a lovely Chinese Lady who asked whether this train was going to ‘Rishon’ – after the third time of asking I realised that she wanted to go to Richmond.  Her English was practically non-existent but I managed to explain that Richmond was the fourth stop from here.  I explained that I had to get off at Twickenham – two stops from here.  We managed some kind of conversation and I learnt that she is visiting her daughter who is studying at University.  She told me that I was a beautiful lady.  I think that’s what she said so I said that she too is a beautiful lady.  As the train approached Twickenham I was horrified to see hordes of Australian rugby fans waiting to get on.  I tried to explain that they were harmless and not to worry.  I said goodbye and left her to the hordes.  I hope they were kind to her and made space for her to leave the train at Richmond.  As for me I had another half hour wait for the train to Reading, this time in the ‘pleasant’ company of slightly inebriated Scottish and Australian rugby fans.  I gathered from the conversations around me that plucky Scotland unluckily lost to the Wallabies.  So glad when I finally got home after 10.  The journey from Shepperton took three and a half hours!