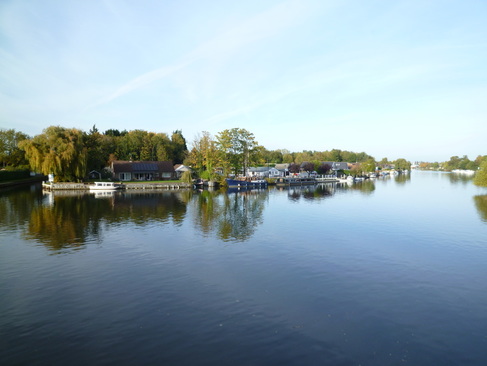 I should have started this walk at Shepperton but I couldn’t face the complicated train journey.  Instead I took the direct train to Twickenham again.  But rather than following the river I would take a short cut through Bushey Park to Hampton Court and join the Thames Path there.
This time I needed a lot of patience exiting the station as I was surrounded by what seemed like thousands of excited rugby fans – Argentinians and Australians on their way to the semi-final.  Like last week, I didn’t mind – I know what a great feeling it is when your team reaches a semi-final – I had that feeling in April when I was privileged to follow my football team to Wembley.
I walked quickly through Twickenham and then through Bushey Park.  I was a little disappointed not to see any deer as a lady I asked for directions warned me not to go near them.  Maybe they hid from the masses of people who visited the park on this beautiful Sunday afternoon.  There was a queue to get into the car park.  I passed the Diana Fountain (a large round pool popular with ducks and geese) and soon reached Hampton Court.  I visited the WC here – no time for coffee - and then at last I was back on the Thames Path retracing the route to Walton Bridge.  After crossing the bridge, I was careful not to lose the path again.  The sign posting here definitely could do with some improvement – maybe the reason for this is because this is the alternative path (avoiding the ferry crossing).  I carefully followed the route description in my trail guide (not that easy as I’m walking in the opposite direction). I’ve no idea how Chrissie and the other runners managed not to get lost here in the dark.  After skirting round Shepperton along roads and through a little park I was glad for the short pleasant interlude of a lovely wooded bit and the brief reacquaintance with the river before I was back on a road again.  The aptly named Ferry Road led down to the scenic Shepperton Lock and the Weybridge ferry crossing.  I had a very late lunch here and visited the futuristic toilet (all automated and high-tec, quite scary).  With the sun already setting slowly as we are in winter time now, I pressed on while admiring the quirky houseboats lining the bank.  The walk now had a very rural feel to it and I was on my own until the Chertsey area.  I took my last photo of the day (Chertsey Bridge) and walked on the grass verge by a road past Laleham Camping Park.  I did not particularly enjoy this stretch and went through the motions until I reached Laleham..  Here the road left the path (or probably the other way round) and I was back on a proper footpath.  I was pleased that from now until the end of the walk in Staines there were houses on my right.  That meant that there was enough artificial light to guide me.  Surprisingly, despite the darkness, I found the walk here quite pleasant – something about gazing into other people’s living rooms I guess!
I reached the railway bridge and found the station shortly after.  I was pretty tired now and pleased that my train home was just a couple of minutes away when I arrived at the station.  Unfortunately, the train was packed with people – rugby fans again – and I had to stand but a lot of people got off at Egham and Sunningdale and I found a seat.  There was a lot of rugby talk again. I sat next to an Australian who was pretty pleased.  They’ve reached the final yet again but he was due to fly home tomorrow and will have to watch the final on telly.