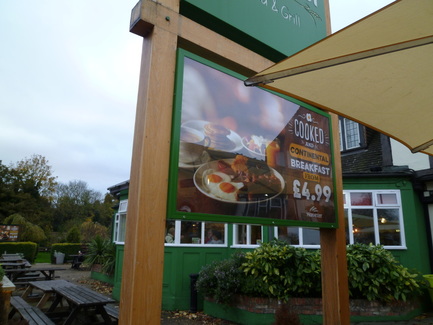 Chrissie's dream
﻿Monday 9 November 2015
​
I am having a well-earned (I think) week off work which is why I’m doing this walk on a Monday.  The weather was bad yesterday so I’m pleased that today the sun is shining.  I arrived in Staines just before 1pm.  I should really start earlier now that it gets dark so early.  First I took an accidental detour through the town centre.  I thought I knew exactly in which direction I had to leave the station behind, completely forgetting that the platform the train arrived at was not on the same side of the one I left Staines on the last leg!  Thought it looked different... and the sun was in the wrong place!  Anyway I sat down on a bench, dug out my map, got my bearings and eventually arrived at the Thames Path.  So as not to miss out on any section I walked downstream for a bit meaning I had to retrace my route for a few steps.  But that doesn’t matter – everything looks different if you walk in the opposite direction.
I quickly walked through Staines to make up time.  As always I enjoyed crossing the bridge and the path soon took on a more rural feel on the other side.  That feeling didn’t last too long though as the roar of the M25 traffic reminded me that I’m still quite near London.  Something I don’t like is walking underneath a busy road bridge.  The noise, the graffiti and dim light feels a little menacing.  Glad I reached the other side and was able to walk away from the noise.  I found a bench by a boatyard facing the river and stopped to have lunch.  The nice thing about this walk so far has been that I’ve always found a convenient bench to stop for lunch.
The walk was enjoyable now and led past neat bungalows with well-tended gardens.  Next I passed a huge and posh hotel, the Runnymede-on-Thames and the Bellweir Lock.  The path was now on the grass and followed the river around a bend.  I learnt a bit about the Runnymede history here and briefly stopped by a statue of the Queen.  This year is the 800th anniversary of the sealing of the Magna Carta.  I didn’t have time to visit the memorials but walked up to an interesting looking arrangement of chairs.  This was an artwork by Hew Locke, commissioned by Surrey County Council and the National Trust to mark the 800th anniversary.  Each chair (crafted in bronze) depicted a scene from historical events relating to past struggles for freedom and human rights.  I would have liked to have a closer look at each chair but had to press on (and needed the toilet).  I stopped at the lovely NT café located in one of the Lutyens gatehouses, which are situated on either side of the road, for a cappuccino and a marzipan chocolate bar for later in case I need extra energy.
Refreshed I set off again, looking forward now to reaching Checkpoint 2 (54 miles) on the T184.  It was at the ‘Bells of Ouzeley’ pub/restaurant at Old Windsor.  Chrissie reached this point at 3am on day 1.  She allowed herself about an hour and a half of much needed sleep and must have been tempted to stay for the £4.99 breakfast pictured on a large advertising board!  But of course that was not allowed.  She probably helped herself to some of the crushed crisps she had in her backpack (concentrated calories!).  I took a couple of photos and then set off towards Windsor.  There was another bridge to cross (the Albert Bridge) and shortly after the path turned right away from the river to reach the road.  The tranquillity of the scene was disturbed now and again by the roar of airplanes taking off at nearby Heathrow Airport.  I hope the Queen has double-glazing.
The walk along the pavement between river and the village of Datchet dragged on a bit but eventually the path led back down to the river and between the trees there were some good views of Windsor Castle.  This gave me the illusion that I was nearly at today’s journey’s end but I had to walk around another long bend of the river past Romney Lock.  It was dark when I arrived at Windsor so the photo will have to wait for my return.  Windsor is a picturesque town and if I liked shopping this is where I’d come to buy some posh frocks!  The train station is very small and very cute.  There is only one train of two or three carriages shuttling between here and Slough.  I whiled away the journey home reading more of the adventures of the ‘Three Men in a Boat’.