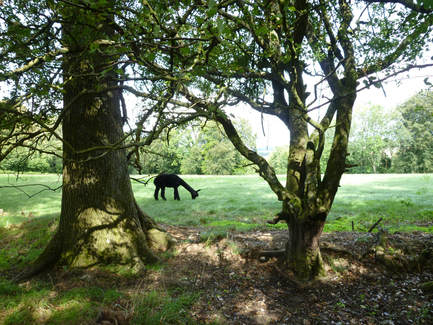 Alpaca Surprise
A beautiful day was promised so I returned to the Wayfarer’s Walk – last visited in Spring. The bus from Winchester to Swanmore was very slow (took more than an hour) so I was really happy to at last get walking. I followed the King’s Way for the couple of miles to the trail to find that the fruit trees in the orchards, which were covered in spring blossom and kept my spirits high on the approach to Swanmore in Spring, were now loaded with apples and pears. All that was left of the magnificent yellow rapeseed field was a bit of stubble. However, the views across the Meon Valley were magnificent, just possibly surpassed by the beautiful sky. After crossing the A32 and then the River Meon, there was one short uphill stretch to go before the King’s Way meets the Wayfarer’s Walk.
Now, at last, I was back on the trail and, after walking steadily but gently uphill for a while, I was rewarded with stunning views. I felt on top of the world as I strode along the grassy path. The blue sky and the green grass created wonderful scenery. After crossing several fields, the path entered woodland near a farm and as I was getting rather peckish and found a nice place for my picnic lunch. I sat down on a log and started eating, only to see an alpaca walking towards me. I was in no mood to share my sandwich and packed up to continue the walk. The path now led downhill through lovely woodland towards the village of Hambledon. As I arrived in the village I heard lively music and was attracted enough to leave the trail and head down the high street to find out what’s happening. I was lucky to find the village fair in full swing and the glass of Pimms I enjoyed while listening to the folk music was well worth the small entrance fee. 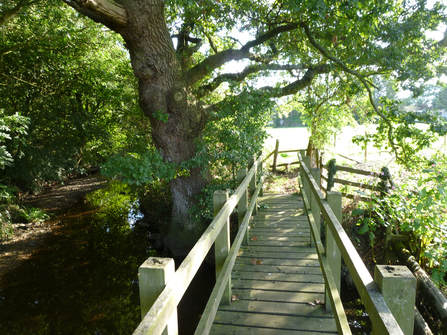 Footbridge near Sheepwash Farm
Leaving Hambledon, the trail went steeply uphill and I stopped briefly at the top to catch my breath and admire the view of the village and the downs beyond. Aware that the afternoon has advanced considerably and I still had a long way to go I quickened my pace and crossed field after field just stopping every now and again to reassure myself that I was on the right track. The map was essential here as signposts were few and far between.  Eventually I reached Denmead. A glass or cup of something refreshing would have been nice, but I chose instead to ‘eat up’ the miles. After Denmead I had to follow a road for a short while and then cross a golf course. I was a bit weary of flying golf balls but emerged unscathed and continued walking to Closewood Farm Piggery. I’ve never seen so many pigs and certainly have never seen pigs run so fast. I tried to get a closeup photo but couldn’t get near enough. They were terrified of me! The walk now continued pleasantly, first along and across a little stream and then through woodland coppices and meadows, eventually reaching Purbrook Heath Road. After following this road for a while, I was pleased when the trail continued southwards along a pleasant track, first passing playing fields and then along a tree-lined ditch, before skirting along two sides of a maize field. I had now reached Widley. A hedged path at the back of the houses provided the final stretch of today’s Wayfarer’s Walk to reach the B2177 road. Here the Wayfarer’s turns east towards Emsworth, but that’s for another day.
As the sun was going down I enjoyed some fantastic views of Portsmouth harbour, the unmistakeable Spinnaker Tower, and ships and ferries sailing in the distance. I was not really looking forward to the walk into Cosham, but because of the views and pleasant parkland it was surprisingly pleasant. Unfortunately, I’d just missed a train and had a lengthy wait. I walked back along the High Street to buy some food from Tesco’s and munched this as I waited for the train. Just as well, as the journey home was anything but straightforward. I arrived in Winchester, expecting there to be a fast train to Reading but no train was leaving anytime soon towards Basingstoke and beyond (trespasser at Southampton station). Eventually the rail company organised taxis to take us to Basingstoke. I then had another wait of nearly an hour for a very slow replacement bus to Reading. It’s been a long day!
My highlightsWildlife: Useful information
Transport:  Refreshments:Public Conveniences:
Click here for more photos from this walk
Continue to Section 8 (Cosham to Emsworth)