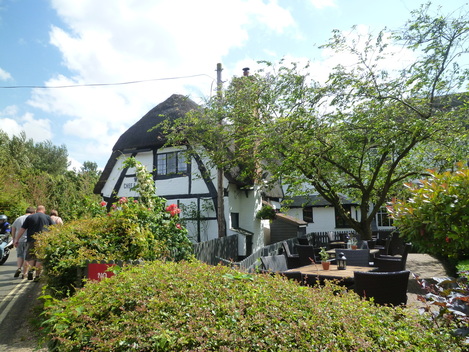 I was tempted to stay at home today and watch the Wimbledon final between Andy Murray and Milos Raonic. However, having spent far too much time watching telly yesterday, it was far better to go walking. I toyed with the idea to start a new walk (The Three Castle Path) as I am a firm believer in the saying ‘Variety is the Spice of Life’ but decided to continue on the Thames Path. So I cycled to the station and got on the X40 bus to return to Shillingford. As I’ve missed a bit of the official path there last week, I walked down Wharf Road to Shillingford Court where the path briefly meets the river. It was worth it for the river view and the rose adorned cottages.
The next part of the walk was to be got over, rather than enjoyed, as it followed the very busy A4074. It also involved crossing this road twice as the pavement was on the wrong side. On the positive side there was a profusion of wildflowers (or weeds as some people would call them) on the grass verge. Soon, however, I was able to leave the road behind as a footpath through the meadow led back to the river. The grassy path now follows the Thames closely as it continues towards Little Wittenham, crossing the River Thame on a wooden footbridge en route. I was still feeling energetic and as I reached Little Wittenham Bridge I decided to make the worthwhile detour to the Wittenham Clumps. The wildflower covered hill was a delight and the view from the top well worth the short uphill slog. After a picnic lunch I headed downhill to return to the Thames. Lots of teenagers were out hiking in the area. They were probably staying at the campsite near Day’s Lock. Good to see them learning map reading skills.
After crossing the river at Day’s Lock and Weir the walk follows the river around a large bend. The Wittenham Clumps and Didcot Power Station seemed to follow me. Sometimes they moved closer and sometimes they popped up in a different direction. The grassy path itself was not exactly eventful. I did have an unwanted encounter with a dog though.  I am generally quite dog-friendly but was not too pleased when this dog came running at me and jumping up. The dog was simply excited and returned to the owners when called. It listened to the owners' instructions to stay sat down as I walked past. They also apologised when I frowned at them, but dog owners should realise that it can be frightening when a dog charges at you; and if the ground was muddy then my trousers could have been in a much worse state than just a little dusty.
The walk continued through meadows including a flood meadow managed by the Earth Trust (a Little Wittenham based environmental charity. Soon I arrived at the picturesque village of Hampden Clifton. Before crossing the bridge to the village I walked down the road away from the bridge to have a refreshment break at the Barley Mow pub. I usually stay clear of pubs when I walk on my own but on this warm day I needed extra fluids (and a toilet break). I bought an elderberry pressé and a little bowl of cashew nuts and sat in the pub garden – delicious, should do this more often. Then I walked across the bridge and wandered along the village high street. Clifton Hampden is a lovely, quintessentially English village, complete with village store, post office, red phone box, church and thatched cottages.
After Clifton Lock the path follows the Clifton Cut while the other half of the river detours to Long Wittenham. Both come together again at a weir. Now was the time of day now when I could have done with the reviving effect of a coffee. Alas, there was no conveniently situated café along the path here. So it was head down and walk on, disturbing butterflies as they sunbathed on the path. I passed underneath a railway bridge (presumably the Oxford to Didcot line) and soon reached Culham. I did not enter the village but stopped briefly at the lock to finish what remained of my lunch. Here the river again divided into a Cut (the Culham Cut), along which the Thames Path follows while the river meanders to Sutton Courtenay before both come together again as the Thames swings northwards towards Abingdon. It was getting gloomy as I approached the town and the rain started to fall when I crossed the bridge. I quickly walked into the town centre – it looked really nice and if it wasn’t for the rain I would perhaps have explored it a bit further. I spotted a Costa Coffee shop and made a beeline straight there. To my delight they had crumpets on offer. So instead of a cake (which I usually find too sweet) I had two lovely hot crumpets, dripping with butter, to enjoy with my coffee. Lovely! Oh, and I found out that Andy Murrey has won his second Wimbledon title.
The rain had now stopped and I walked to the bus stop to catch the X1 bus to Didcot, followed by a fast train back to Reading.

My highlights:
Wildlife:
Useful information
Transport:
Refreshments:
Public Convenience:
Postscript:  I started writing this report the day after the walk with one eye on the telly and was amazed to see Prof Brian Cox wandering around the Wittenham Clumps. He was presenting his new series 'Forces of Nature' and it was wonderful to see the Round Hill changing from Spring to Summer to Autumn and finally Winter. The photography was stunning but you can't beat experiencing these special places yourself.
Click here for more photos from this walk
Continue to Section 15: Abingdon to Oxford