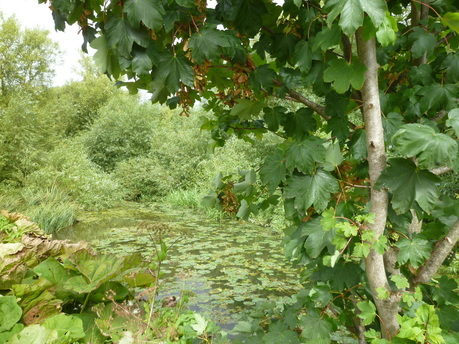 Idyllic scene near Abingdon
Woke up to the news that Mo Farah has won a second gold medal! Brilliant!  It was too late for me to stay up and watch the final day of athletics at the Olympics because I wanted to make an early start on this walk.
I got up early(ish) to catch the train to Didcot. Travel was straightforward. I had a good train/bus connection at Didcot and arrived in Abingdon before 11. After wandering through the scenic town centre I was soon back on the towpath. Lots of people, dog walkers, families and joggers were out and about, enjoying the riverside path. At Abingdon Lock and Weir, the Thames Path crosses to the other side. I always find it quite exhilarating to cross a river on a weir and here there was the added bonus of a particularly picturesque scene at the other end. The lush greenery made for pleasant walking. The path veered away from the Thames for a short stretch and was then mostly obscured by vegetation. Every now and again the shrubbery and high grass was trimmed to reveal the serene river as it continued its journey. This next stretch was quiet and lonely, the peace interrupted a couple of times by music being played on a passing river boat. Quite enjoyed the musical interludes!
Something unusual happened then – two people diverted my attention. First I chatted with a woman who also likes walking the Thames Path in sections, and was on her way to Oxford. She was walking at a faster pace than me and was a little concerned about the distance she still had to cover. She’d parked her car in a pay-and-display car park in Abingdon and needed to get to Oxford quickly so she could catch the bus back. She worried that she may not have fed the parking meter enough so, after the brief chat and mutual grumbling about Sunday bus services, or the lack of, she sped off. Time was not something I had to worry today. It was nice to see another woman out enjoying walking by herself – maybe I'm not such an ‘oddball’ after all!.
The second encounter happened after I was eating my lunch on a bench at the Radley College Boat House. I was not too pleased when another walker, a middle-aged, scruffily attired male, sat down on the neighbouring bench. He didn’t look like a hiker, and I felt a little uneasy, so I quickly finished eating my lunch for a quick getaway. However, this gentleman started walking again before me, quite slowly, and I had to overtake him on the particularly narrow path. I muttered an ‘excuse me please’ and strode briskly past him on the taller grass beside the path – I don’t think he heard me as he seemed to be talking to himself. I am sure he was perfectly harmless but I was quite relieved when a group of young people with fishing gear passed me in the opposite direction. 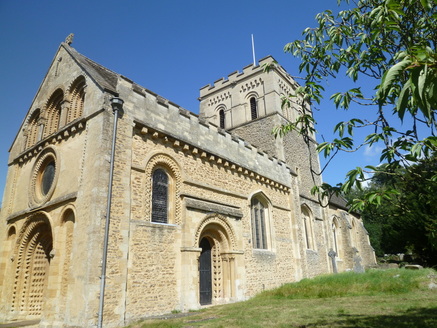 St Mary's Church, Iffley
As I approached Sandford Lock the path got busier, and several boats were waiting to get through the lock. I watched for a few minutes. The path was broader now and I passed joggers, walkers and cyclists at regular intervals. The area still felt quite rural though. There were meadows and wooded areas by the riverside. One of the meadows is owned and managed by the Oxford Preservation Society. After passing under a railway bridge, crossing the Hinksey Stream on an impressive footbridge and walking under the busy Oxford bypass bridge I arrived at the picturesque Iffley Lock. I walked across the lock bridge and wandered up to the magnificent St Mary’s Church for a restful break in the shady churchyard.
Shortly afterwards I joined the crowds as the City of Oxford rowing regatta was in full swing. Rowing boats, as well as other boats, large and small, crowded the river. The Isis Farmhouse (a seasonal pub/restaurant) was busy serving refreshments to the rowers, coaches and spectators. Lots of boathouses were lining this stretch of the river. It seems that each of the Oxford Colleges has their own boathouse.
I was thrilled when I saw a glimpse of one of the famous Oxford spires between trees in Christchurch Meadow on the opposite bank. The Thames (or Isis as it is called here) does not go through the centre of Oxford so a detour would be necessary to see more of the delights of the city. I continued walking through the Grandpont area and past Folly Bridge to soon arrive at the end of today’s walk at the Punter Inn at Osney Lock. This was Checkpoint 5 during Chrissie’s Thames challenge (130 miles now completed). I continued to Osney Bridge and the short walk to the station where I enjoyed a coffee and pretzel before boarding the rail replacement bus for the return journey to Didcot and train to Reading. I think transport will now get more challenging as the path enters more remote countryside but I’m looking forward to the challenge.