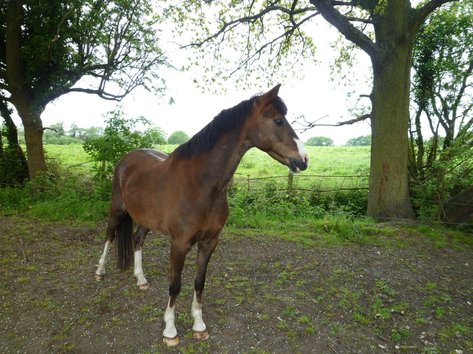 A Friendly Horse!
​         After ‘losing’ my way at the end of the previous section in the gloom of a late January afternoon I was looking forward to getting back on track. The day started off a little murky but the weather forecast promised sunshine later. After the short train journey to Sandhurst, I had to retrace my steps to get to the place where I took the wrong turn. That was surprisingly easy even though Wildmoor Heath looked rather different today then it did under the moonlight in January!
Soon I reached Edgbarrow Woods and the proper trail. The sun tried to make an appearance and I made good progress passing through Little Sandhurst and then, after crossing the railway line, Ambarrow Hill, a National Trust woodland. Shortly after crossing the busy A321, the path turned into a field where I spotted three girls (teenagers) with large backpacks studying a map. There was a horse grazing on our grassy path and it appeared that the girls were a bit scared and unsure whether they were on the right track. I was happy to reassure them by going ahead and stroking the horse’s nose. Shortly after, we arrived at Horseshoe Lake, a haven for birds, human paddlers and ducks. Several goose families were showing off their offspring on the lake shore. An idyllic scene – only the sunshine was still missing. After leaving the lake, the path continued on a delightful trail along the Blackwater River. Here I met the backpacking girls again. I asked them if they had a long way to go but they just smiled and didn’t seem to want to get into a conversation, so I left them to it and walked on. I do hope that, contrary to how it appeared, they enjoyed the hike. 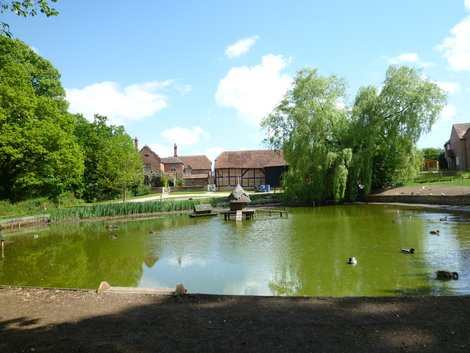 The Causeway Pond, Hartley Wintney
All too soon I had to (reluctantly) leave the riverside path and on the walk towards Moulsham Green it started raining! I sheltered briefly under some trees and then, when the rain eased, walked briskly past the village and Whatmore Farm. After crossing the busy A327 and walking between a hedge and a field of cows the rain finally stopped and I soon arrived in the hamlet of Up Green with its pretty Victorian cottages. The path then skirted Lower Eversley Copse and zig-zagged along fields, through paddocks and over stiles to reach St Mary’s Church where I stopped for lunch. The sun at last gained the upper hand over the murk. After setting off again, I soon entered Warren Heath – a large forested area. The chalky path went through a light and airy area of the Heath on a gentle uphill slope before continuing on a wider ‘ride’ at the top. Despite the numerous rides crossing the path, route finding was straightforward with the help of my guide booklet. Soon the path veered off the ride and led downhill to emerge from the forest in the Hart valley. After a slightly tedious walk along a track (Springwell Lane) and after crossing a paddock, the path crossed the River Hart on a footbridge and followed the River on a delightful woodland path. Soon the path continued uphill along Hazely Heath before descending through woodland to Hartley Wintney.
It was quite hot now and I was running out of water so I detoured to the village shop on the High Street (A30). After retracing my steps and safely crossing the road I soon arrived at the picturesque village pond (the Causeway Pond). I stopped for a moment watching the ducks and taking in the peaceful scene before continuing the walk through parkland and along the Cricket Green where a game was in progress. Cricket has been played here for over 200 years and, not surprisingly, the adjacent pub is called ‘The Cricketers’.
After passing through a park of mature oak trees and walking along Church Lane, I reached St Mary’s Church where I allowed myself another short break to admire the views across the green and pleasant countryside. Wilting a bit in the sunshine, I was in a hurry to finish the walk now, especially as the path continued rather monotonously through farmland before crossing over the M3 on a footbridge. Shortly, I reached the road leading to Winchfield Station where the train to Basingstoke soon arrived.