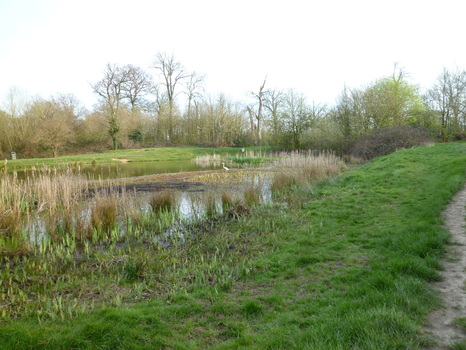 Having wasted time in the morning on an unsuccessful argument with my computer I arrived in Greenford quite late and didn't start walking until just before 2 pm. The weather was bright but a cold wind from the north made it feel quite cold in exposed places. Greenford was busy with people and cars and I was glad to leave that behind as the path entered a park and nature reserve called Paradise Fields. Soon I was back walking along the Grand Union Canal. This was the arm from Paddington Basin, which will presumably join the arm I walked along on the previous walk. I looked for a terrapin – an elderly lady I talked to earlier in Paradise Fields told me that she had seen one. Apparently they escaped from captivity and have made the canal their home. This is not good news for the ducks as the terrapins eat young ducklings. Slightly disappointed not to have spotted one of the invaders I left the canal after crossing over to the other side on the interestingly named Ballot Box Bridge. Now the path led uphill (my guide book says ‘steeply’ but I thought it was quite gentle) and I enjoyed walking along the lovely path lined with flowering shrubs and brambles. The views opened up as it led through meadows to reach the summit of Horsenden Hill. There was some sort of gathering here of people listening attentively to a young man talking (a sermon?) very quickly in a foreign language (I'm guessing Romanian).
After admiring the views towards Harrow and across West London I walked downhill through a lovely ancient woodland to reach Sudbury Hill. There now followed a lengthy stretch of walking along roads, interrupted only by a short uphill walk along an old stony track, the Green Lane. I was now in Harrow-on-the-Hill. I knew this was the home of a famous and posh public school but nothing else. At first I had to walk uphill along the busy main road into a strong headwind which wasn't that much fun but reaching the town centre I soon realised that there was more to this town than a well-known school. There was lots to see – interesting architecture, good views through gaps between buildings, handsome churches and then of course the ancient buildings of the famous school. There were restaurants and Cafés.  Harrow-on-the-Hill really is on top of a hill and the views extended to the Shard and the City.
The walk now went downhill passing state of the art playing fields (I hope the Harrow School pupils realise how privileged they are) and then along Ducker Path between Northwick Park Hospital and a golf course and on to South Kenton. There was some more road walking now as I passed South Kenton and Preston Road stations. It was not dull however, as the route zig-zagged along quiet and pleasant streets, with Preston Park and some lovely cherry blossom offering a green interlude.
For the first time since starting the Capital Ring Walk I now missed a turning – either I was absorbed in some very deep thoughts or maybe it was because the track off to the left that was supposed to be green was actually grey and gravelly. Actually I had no excuse as my guide book gave precise directions as to where I had to turn away from the road (between house numbers 79 and 81!). So after a bit of backtracking I was back on track. I encountered quite a bit of mud here as I entered Fryent Country Park. The path turned to the right and after walking gently uphill through the soggy grass I reached the best of today’s walk. First there was the lovely woodland with patches of bluebells and then the pretty pond on top of Barn Hill. I disturbed a heron as I photographed it and then spent a few blissful minutes sitting on a bench, snacking, watching the ducks and listening to the birds (parakeets included). Leaving the pond behind I left the Capital Ring Walk and after admiring the views across West London, Wembley Stadium, and as far as the North Downs, I headed downhill to Wembley Park for the journey home, looking forward to returning to Fryent Country Park and Barn Hill soon.