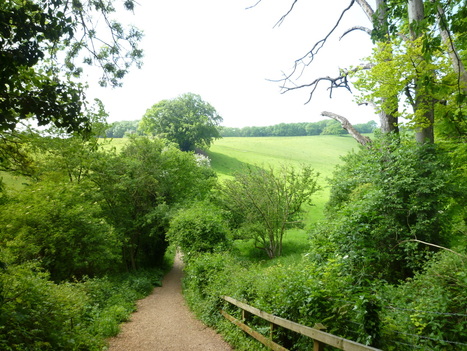 Path between Whitchurch and Goring
Sunday 29 May 2016

Back on the Thames Path at last! I completed the previous section on New Year’s Eve but was then defeated by mud and water. Now that we are well into spring it was high time to return. The path was beautiful and dry – makes such a difference to the enjoyment of walking! Not to say that I didn't enjoy the Henley to Reading walk - slithering and sliding through mud and other tribulations are all part of the adventure!
Reaching the starting point was easy today - I took the bus into town and joined the path by the spectacular new Christchurch Bridge. May I take this opportunity to say to the people in the town who still think that the bridge was a waste of money that I completely disagree.  It’s wonderful to be able to get from Reading to Caversham by bicycle without risking your life. Similarly, the lack of diesel and petrol fumes must be a wonderful relief for pedestrians.
Walking along the riverside in Reading is never dull. Today I was entertained by the many geese and goslings, swans and other water birds. By Caversham Bridge there was a feeding frenzy in full swing. Ducks, geese, swans and pigeons had easy pickings as families took advantage of the fine weather to come and feed the ducks. Passing the Reading Rowing Club boat house and continuing along Reading Promenade I watched as the river became the setting for canoe races. The riverbanks on both sides of the river were now a tapestry of all shades of green with flowering hawthorn and other flowering shrubs adding further colour. Soon I reached Tilehurst where the path leaves the river for a while. I had to cross the railway line to reach Oxford Road. Here I met up with my daughter Kelly, who joined me for the walk to Streatley. There was a bit of road walking now as the path led us through a quiet residential area of Purley before we were reunited with the river at Mapledurham Lock. We stopped for a picnic lunch but didn't linger too long as the cool breeze made it feel quite chilly. Now the walk continued to Pangbourne along seemingly endless meadows. Across the river the Chiltern Hills made for a beautiful background. After Pangbourne (and a welcome toilet break), we crossed to the other side of the river via the Whitchurch toll bridge. Here, to our amusement, Kelly spotted a barge named ‘Muchroom Bargee’. After following the road uphill through the village for a little while the path then entered the picturesque St Mary’s churchyard for a reflective interlude.
The route now followed a broad track for quite a while (too long for my liking) but that was forgotten when we reached the footpath leading us into the delightful woodland which covered the quite steep slope rising from the river. This part of the route justified my worries last August when Chrissie had to negotiate this path in the dark and under time pressure. Today it was beautiful and relaxing. It reminded me of the ramble along the Rhine I enjoyed recently in Switzerland. There was a scene with woodland, river and complete with World War II bunker which could have been in either country.
Leaving the woods, the path went downhill, crossing the railway line underneath another Brunel bridge to rejoin the river. There was a conveniently situated bench where we finished our leftover lunch. A dog couldn't resist checking out what we were doing, or maybe he got a whiff of the delicious scotch egg, and promptly slobbered over my camera case and guidebook. I was not amused! Another reason why I am not a dog fan.
Refreshed we now followed the river closely and soon reached the pretty village of Goring. Chrissie and her T184 challenge was never far from my mind now as I clearly remembered that Saturday night in August last year when it was touch and go whether she would make it to the checkpoint in Streatley by the cut-off time. Kelly and me spent that evening tracking her progress on-line and willing her on to keep going through the darkness and drizzle. Today Kelly and I rambled along the riverside path, admiring the views as we crossed the river, and reached the Swan in Streatley in a leisurely fashion. Here in the car park was Checkpoint 3. Chrissie made it with not a minute to spare. She got there at 11.30 precisely having completed 100 miles. Of course, I have now also walked 100 miles along the Thames. Never mind that it has taken me nearly nine months. To celebrate, Kelly and I decided to stop for tea and cake at the Boat House Café. We just got there before closing time but had to make do with a severely depleted choice of cake. Soon it was time to walk back across the bridge and uphill through the village to Goring station to catch the train home.