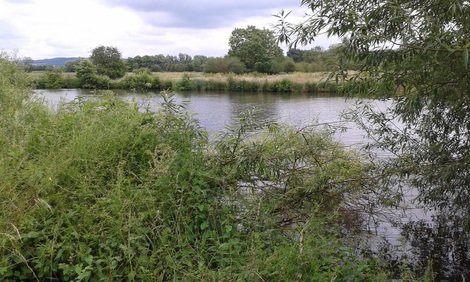 Time to walk off the post Brexit referendum blues. The Thames is still flowing serenely through the Berkshire and Oxfordshire countryside. Kelly joined me on this short walk today. We had planned to walk as far as Wallingford but decided to cut the walk short at Cholsey as Kelly (six months pregnant) was tiring and the nasty cough didn’t help.
We started walking from Goring Station and crossed the bridge to Streatley where we continued the Thames Path Walk along the leafy path. We did encounter some mud here as the path entered a shady wood; not surprising really, after the recent heavy rain. Summer hasn’t really taken off yet, and although I much prefer walking in cool weather, it would be nice to have some dry weather and mud-free paths. Actually, it wasn’t that bad and we were soon walking along a tranquil, grassy riverside path with pleasant views across the river to South Stoke and the Chiltern hills beyond. We reached the Beetle and Wedge riverside inn in Moulsford where we were hoping to stop for a bite to eat. Unfortunately, they had stopped serving lunch (it was nearly two o’clock), so we sat down on a bench and made do with our bottles of water and nibbles while the greedy ducks, desperate to share our meagre meal, provided the entertainment.
The walk now moved away from the river as the towpath continued on the opposite riverbank. We walked along the main road through the village of Moulsford and made a short detour to St John the Baptist church. Moulsford is home to a public school and we were impressed by the sports facilities which we passed as the path led back to the river. After walking underneath another Brunel railway bridge, the path followed the river through lush vegetation and we soon reached the track leading to Cholsey. Sadly, the pub we were looking forward to visiting, turned out to be a sports and social club and was closed. The direct route to the station followed a seemingly lifeless street along the outskirts of the village to a deserted train station. On my return here at the start of the next section, I will make a detour to the village centre to hopefully leave the place with a better impression.