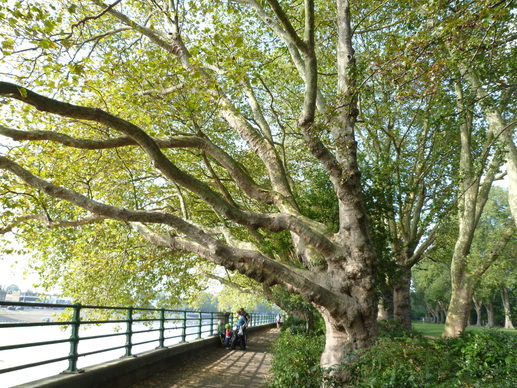 This autumn is simply wonderful.  The sun is shining brightly again and I can’t wait to get walking.  After an easy journey to Putney Bridge the walk took me past a rose garden, then along Bishop’s Park at Fulham.  The London planes provided beautiful scenery and much appreciated shade as it got quite warm.  So far the sun has been my near constant companion on my westward walk.  I’m glad I brought my sun hat and glasses.  Next the path diverted away from the river to go round Fulham FC’s Craven Cottage.  This must surely be one of the most idyllic location for a football stadium anywhere in the world!  I like these diversions away from the river – there is always something of interest, perhaps an unusual building or some industrial relic.  It also adds to the pleasure of seeing the river again.  Leaving Craven Cottage behind, the path followed the river passing old wharves and colourful riverside pubs.  The weather has brought out the crowds.  People were walking, jogging, cycling and playing in the parks.  The pub gardens were packed – we’re in the middle of the Rugby World Cup and a game was in progress.  There was such a feel good factor in the air that seemed to affect everyone even though England aren’t doing very well and can’t now qualify for the quarter finals.  I loved watching people enjoying themselves as I sat down a bench eating my lunch and monitoring my progress.  I wanted to reach Twickenham before dark so couldn’t dawdle for too long.
I left the Fulham area behind, passing a few new luxury apartment blocks.  After passing lovely Hammersmith Bridge the path continued along the river for a while before joining a road in the Chiswick area.  Back on the riverside I watched the gulls, cormorants and a heron looking for tasty bites in the muddy sand at low tide.  I saw a cormorant grappling with a flat fish (plaice?).  There were a lot of rowing boats on this stretch too, along with a few sailing and paddle boats.  Bridges become welcome landmarks on a long river walk and next up was Barnes Bridge.  Here the path diverted away from the river to get to the other side of the railway track.  Just before I reached the river again there was a lovely green wooded area – a little nature reserve that invited exploration bit I resisted temptation and carried on towards Brentford.  At Duke’s Meadow there were large groups of people enjoying themselves sharing picnics and listening to loud music.  My guess is that they were Eastern European Roma people.  Soon the path veered away from the river again past Chiswick Bridge, then back to the river for a short but pleasant walk across a lock and past a pleasant garden lawn.  Soon I had to turn sharply right to join the road for what seemed a very long time.  I worried that I’d missed a Thames Path sign and by this time I also needed a toilet.  Sneaking behind a tree was not an option so I had no choice but to press on towards Brentford.  Eventually I saw the Thames Path sign and was relieved when I was back on the riverside.  Here there were several pubs and I was tempted to stop at the Café Rouge for something to eat but decided to continue to Brentford.  I could now see Kew Bridge and I knew that I’d find a Coffee shop there.  Costa duly obliged and after a quick break I felt refreshed and ready to tackle the final stretch with renewed vigour.
​          I found the next stretch really interesting. First there was a clutter of old houseboats of varying shapes and sizes and then when I reached what could have been a boring bit of road I spotted Morrison’s and knew that just beyond the supermarket I’d find The Beehive pub.  This was the location of the first checkpoint of the T184.  So that’s the first marathon completed!  Next, I crossed the Grand Union Canal, a couple of times I think, walked along a lock and the towpath for a short while, then crossed a footbridge while chatting to a local woman about my walk, before reaching the road again.  Chrissie thought that the section by the canal was not very nice but I enjoyed the old industrial feel of the surroundings.  Next the scenery changed dramatically yet again as the walk passed through Syon Park, past beautiful gardens, fields, trees and even sheep!  The light was starting to fade as I reached Isleworth.  I briefly lost the path but with the help of a very nice local man I was soon back on track.  There were still lots of people out and about, walking or jogging.  Despite the rapidly encroaching darkness I enjoyed the views of Richmond across the river, then passing Twickenham and Richmond Bridges before reaching Twickenham in near darkness.  There was a festive and lively feel about the town decorated with flags and bunting.  This is currently the centre of the rugby universe.