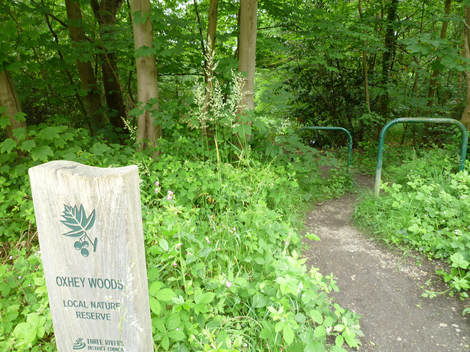 Oxhey Woods
Saturday 2 June 2018
​
This was a walk of ups and downs. It all started well with trouble-free travelling and a pleasant start to the walk on the path through woodland between golf course and railway tracks. After re-joining the Loop at the corner of Sandy Lodge Golf Course the path crosses the golf course diagonally. The good weather drew many golfers to the course, but I managed to avoid the flying golf balls. A fox crossed my path as I left the golfers and followed a woodland path to reach Sandy Lodge Lane. Soon I arrived at the A4125 and after carefully crossing the busy road the path continued through shrubs and trees and then across the wide expanse of South Oxhey Playing Fields. Shortly after entering Oxhey Woods I encountered some unexpected mud and that’s when potential disaster struck. In an attempt to avoid a particularly muddy patch I rounded a couple of trees and then, totally inexplicably, fell flat on my nose! I was utterly horrified about the potential damage to my face (vain person that I am!). I got up quickly and wiped away the blood dripping from my nose and then sat by a tree to clean myself up before continuing. The path was much improved now and every now and again I forgot my nose.
Emerging from the woods the path crossed the fields of Pinnerwood Farm. Losing my way, distracted by the wonderful views towards Harrow-on-the-Hill, led to a close encounter with some horses. One particularly pesky one approached me and, after a friendly hello, I walked away but the horse followed. The nudging on my backpack was a little disconcerting but eventually the horse gave up. Pinnerwood Farm is a horse and stud farm and I’ve seen more horses on this walk than on any other. Now the walking became a little bit tiresome, partly because of the heat but more so by the poor walking conditions near Hatch End. With hindsight I almost wished I’d continued on the hilltop path above Pinnerwood Farm, and rejoined the Loop by the railway line. That would, however, have cut off a couple of miles and to me that would have been cheating! I am glad, therefore, that I braved more horses, a scary dog that left me rooted to the spot until his master managed to call him back, stingy nettles, brambles and biting insects. So pleased to emerge from the overgrown hedged path to cross an open field and reach the track along the railway line. On reaching the road which crossed the rail tracks, the Loop continued on a tarmacked path beside the road, and, to be honest, that was no more fun than dodging the nettles. I passed a garden centre and considered stopping for coffee, but decided to continue.        ​ 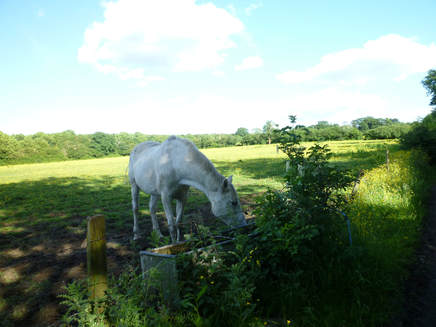 Another horse!
​Thankfully, the walking improved enormously after crossing another busy road. First the path led through some beautifully wild scrubland and then skirted gently uphill on the side of Grim’s Dyke Golf Course before following a track that led to Grim’s Ditch. A lovely path then wound its way through beautiful woodland, past flowering rhododendron, and alongside peaceful ponds. Nearby Grim’s Dyke House was once the home of W.S. Gilbert (of Gilbert and Sullivan). Sadly, he drowned in one of the lakes.
The path emerged from at the Old Redding Road and I enjoyed a picnic lunch here, admiring the beautiful view across northwest London. Refreshed I continued walking through Harrow Weald Common and then entered the beautiful open space at Bentley Priory. I loved walking here – the views across London were stunning, and the meadows particularly lovely.
Next up was Stanmore Common where I lost my way (twice, how careless!) which was ok but added extra mileage to an already long walk. Leaving Stanmore, the path led gently downhill, first on a hedged path, then a track, passing more horses, and finally on a glorious grassy path through high grasses and wild flowers as it approached the M1. After crossing underneath the motorway and negotiating a tricky roundabout and a rather long roadside stretch I arrived at Aldenham Country Park. I stopped at the Fishery Inn and bought a refreshing lemonade. Delicious – I needed that! With renewed energy, I crossed the very busy road and entered the Country Park to follow the path alongside the reservoir. I walked to the end of the dam, past happy duck, geese and swan families, in the hope of finding some coffee but the kiosk was closed. Retracing my steps to the point where the London Loop turns away from the lake I continued walking and soon crossed a gorgeous meadow, bathed in late afternoon sunshine, with lovely views of Elstree and the Hertfordshire countryside. After crossing Watling Street, the path continued through common land dotted with trees and hedges and horses comfortably far away, before crossing Elstree Golf and Country Club. I had now arrived in Borehamwood. On the way to the station I popped into a petrol station shop to stock up on much needed refreshments.
Waiting for the train at Elstree and Borehamwood Station I experienced some of the frustrations commuters put up with regularly on this Thames Link train service. There were cancellations and delays and everyone was relieved when at last a train heading to London arrived.
My highlights: Wildlife: Useful information
Transport:  Refreshments:  Public Conveniences:
Continue to the Section 11 (Elstree to Cockfosters)
Click here for more photos from this walk