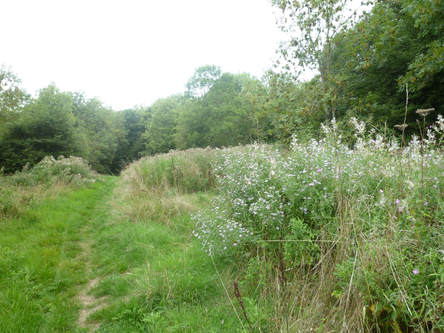 Just before the A1 horror
Sunday 19 August 2018
​        ​
​        I set off early for this walk but just missed a train and then had a lengthy wait for the next one. The whole journey took more than three hours, involving bike, train, underground and overground trains but no problem when accompanied by a good book! At Elstree and Borehamwood Station there are reminders (including Hollywood style Walk of Fame Stars) that this is the location of a famous film studio.
The weather was a little bit cool and overcast at first but soon brightened up. I walked briskly along the road out of Borehamwood. This was a little tedious and I was pleased when there was a parallel footpath through Woodcock Hill Village Green with views across Hertfordshire. After a scary road crossing the path led to Scratchwood and then Scratchwood Open Space. I didn’t enjoy walking through the woodland as I normally would – the litter and a burn out motorbike made me feel a little uneasy. There was a café and toilet on the far side of the Open Space but I was keen to press on. The path continued through woodland before it arrived at the very busy A1 Barnet Way. The next half hour was probably the worst half hour’s walking I experienced on the Loop. A litter-strewn pavement along the highway eventually led to an underpass. The walk back on the other side was not quite as bad but wouldn’t it be great if there was a footbridge across this monster of a road - the Loop continues precisely opposite and crosses another park – the Moat Mount Open Space. Here there were some picnic benches and I considered stopping for lunch but the traffic noise and litter was still too much in evidence. This first part of the walk was certainly one to forget and luckily it got better!
Incredibly, within a very short time the whole walking experience changed – no more litter and the traffic noise gradually eased and was soon forgotten. Here the London Loop joins the Dollis Valley Green Walk and at last I found a peaceful spot for my picnic lunch. The path led gently uphill first through woodland and then open countryside with lovely views and a very rural feel. Somewhere in this area lies the source of the Dollis brook but it was a while before the stream was visible. Eventually, after following a hedged path it emerged by a road and soon after led through the Totteridge Field Nature Reserve. There was a profusion of blackberries here and lots of buzzing noises all around me. I couldn’t resist picking a few of the berries for an instant snack but was very restrained having seen the sign asking us people to leave them for the birds. In the meadow some lovely rare breed cows were grazing. 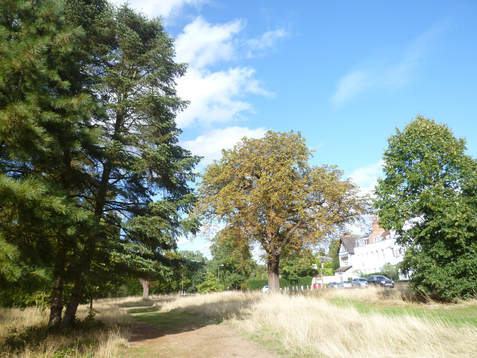 Hadley Green
​          Now the path followed the Dollis Brook all the way to Barnet, sometimes shaded by hedges and trees and sometimes in full sunshine, past meadows and grazing cows. On arrival at Barnet the path crossed to the other side of the brook and soon became paved. Here, for the first time today, I saw people walking – just for enjoyment. The sun was now blazing down and I kept to the shade by the stream rather than following the tarmacked path through the middle of the park. After reaching a road the Loop continued northwards past Underhill, which used to be Barnet’s football ground, but was now a construction site that didn’t look like it could end up looking like a football stadium.
Leaving busy Barnet behind, the best walking of the day now started with a bracing uphill trek through King George’s Fields. After stopping to take in the emerging views south towards London I soon reached the delightful village of Monken Hadley. There were grand houses and pretty cottages. Livingstone lived in one of the cottages for a time after returning from his African explorations and near the church Sir Roger Wilbraham’s Almshouses are located (dating back to 1612). After a turn around the church I left the village behind to walk alongside and then just inside Monken Hadley Common. This used to be part of the huge hunting forest, the Enfield Chase. After crossing Pymmes Brook I took my guidebook’s advice and walked up some steps to arrive at the idyllic Beech Hill Lake, also known locally as Jack’s Lake. The lake with its lily pads and ducks looked glorious in the sunshine and I felt re-energised as I made my way to Cockfosters tube station and the journey home.
Reflecting on the day’s walk, I was unable to conclude whether it was good or bad, beautiful or ugly. The only thing I could say for certain was that it was unforgettable and diverse, definitely worthwhile; the good bits outweighed the bad.
My highlights:Wildlife:Useful information
Transport:  Refreshments:Public Conveniences:
Click here for more photos from this walk
Continue to Section 12 (Cockfosters to Enfield Lock)