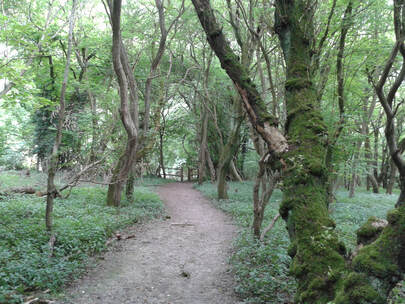 ​          No parkrun – no football - time for another long walk! Leaving Merstham I was soon crossing one motorway (M23) and then underpassing another (M25). If that sounds rather nightmarish when looking for a peaceful country walk, it wasn’t nearly as bad as it sounds and, although on this stretch the M25 was never very far from the trail and could be seen every now and again, it didn’t intrude. In fact, whenever I saw the glimmer of metal boxes snaking along in the valley, I thanked god that I wasn’t sitting in one of them, and instead enjoyed great views, listened to birdsong, disturbed a herd of deer and walked through beautiful meadows and woodlands
After leaving Merstham, and immediately after passing underneath the M25, the path continued uphill to the top of the downs, through a beautiful meadow, teeming with butterflies, bees and bumblebees. At the top, the path turned right along the broad ridge. Here, a circular walk from Farthing Downs, near Coulsdon, joins the NDW for a short time before it returns to Coulsdon. I was reminded of a beautiful walk, a long time ago, along a section of the London LOOP as it passed through the lovely Happy Valley and the Farthing Downs.
Although the views were often obscured by shrubs and trees there was a point when the skyscrapers of Croydon and the city of London as well as the Crystal Palace transmitter were clearly visible. The trail then continued eastwards on a broad track and along a road – that was quite tedious, but I did get to chat to a group of ramblers walking in the opposite direction. I was relieved when at last a pleasant path led into the woods. Emerging from the trees I arrived at the Caterham viewpoint, a perfect time and place for lunch. There was a view to enjoy (never mind the M25) and picnic benches. On the downside, there was also a car park and litter bins. Unfortunately, where there are cars and litter bins there’s litter!
After finishing my sandwich and leaving ‘civilization’ behind, the walking was lovely, a little up and down, and once the busy A22 was crossed on a footbridge, I enjoyed the simple act of putting one foot in front of another in complete solitude. The path stayed mostly on or near the top of the downs, but there was one steep downhill section with many steps. That was necessary to go around the large Oxted chalk quarry. I was now nearing the end of the section, finishing on a high, as the path traversed Oxted Downs, managed by the National Trust with the aim of preserving the rich diversity of flowers, grasses, herbs and shrubs on these chalk hills. Here the Vanguards Way, and the Greenwich Meridian Trail cross paths with the NDW.
There are two links to Oxted Station – I chose the Eastern link, because it was still quite early, and it looked less built-up. The link started along a pleasant footpath, I even took a photo of a pyramidal orchid, but it then ended abruptly by a barrier that firmly closed the footbridge across the motorway! I considered climbing over the barrier but, sensibly, decided against it and instead retraced my steps back to the NDW and westwards to the western station link at Chalkpit Lane by the quarry. The road was not very busy but because of the lack of a pavement I had to be very aware of the traffic and climb on the bumpy grass verge now and again. From the outskirts of Oxted it was still quite a long walk to the station and the lively town centre. Train travel from here and onwards, will necessitate travel into and then out of London, or, I may consider two- or three-day continuous walking. One thing is certain – I will complete the trail!
My highlights:Wildlife:Useful information
Transport:  Refreshments:
Click here for more photos from this walk
Continue to Section 5 (Oxted to Otford)