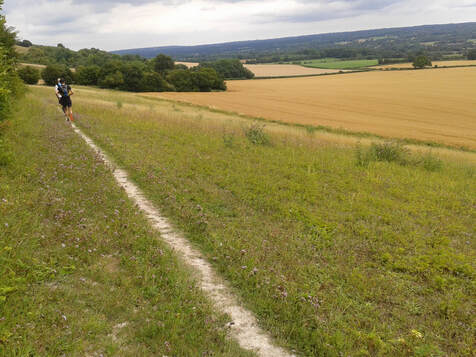 Saturday 3 August 2019
​          Got up feeling nervous – not because of the walk but because today was the day when Chrissie and Phil were taking on the North Downs 100 mile challenge, which involves covering the distance between Farnham and Ashford within a strict time limit of 30 hours! All going to plan I would expect them to pass me somewhere near Knockholt Pound – 50 miles into their run and near the end of my leisurely 12 mile walk.
Before rejoining the North Downs Way, I had to walk along the lengthy link route out of town. Having left the town and its pavements the walk along Chalkpit Lane was not pleasant - I had to walk past a dead deer – a victim of cars that drive far too fast along this narrow road. I was relieved when there was a footpath just inside the woods, parallel to the road, and soon reached the open meadows of the Oxted Downs. At last I could breathe deeply and enjoy the scenery. It was not long before I was distracted by the front runners in the ND challenge. I respectfully moved out of the way each time a runner approached. After a brief but steep uphill walk, always enjoyable at the start of a walk, giving the lungs and heart a good workout, I enjoyed walking through the meadows, which were still pretty but had a bit of an end of summer look. The paths were occasionally encroached by overgrown nettles and brambles. Having passed the junctions with the Vanguard Way and the Greenwich Meridian Trail I soon entered woodland and, after a left turn followed a steep track (Pitchfont Lane), which led to the top of Botley Hill – the highest point of the North Downs Way at a modest 260 metres above sea level.
As runners passed me at regular intervals my walk continued on tracks and paths through woodland, past a golf course and some grand houses. I made good progress as the scenery combined with the cloudy sky didn’t tempt me to stop, stare and take photos. I had now crossed into Kent. Eventually I left the NDW as the running trail detoured to a checkpoint in the village of Knockholt Pound. I hoped to see C & P here but, after standing around for a bit and no sign of them, I continued along the route, leaving the village on an uphill road to reach the spot where the North Downs Way crossed the road. Back on the footpath I walked slowly, desperately wishing C & P to catch up with me! The next half hour or so was one of the nicest parts of today’s walk as the view soon opened up towards Chevening, the motorway and Otford and then a delightful grassy path wound its way downhill. At last C & P arrived – I took quite a lot of photos on this pretty section while waiting for them and then when at last they arrived the battery had run out of steam!
I now ran downhill with them until we reached Otford, not sure whether I helped or hindered. When we reached Otford Station I wished them luck as they were about to encounter another steep section taking them up to the tumulus of Otford Mount – now with darkness approaching rapidly and, no doubt, fatigue setting in.
It was gone 8.30pm and I was pleased that I didn’t have a long journey home – I’d booked myself into a hotel in Ashford in anticipation of a grand finish by the 100 milers on Sunday morning.

PS:  Chrissie made it to the finish with half an hour to spare.  Unfortunately, Phil had to pull out about 2am, falling victim to injury and sickness/exhaustion.
My highlights:
Wildlife:
Useful information
Transport:
Refreshments:
Click here to see more photos from this walk