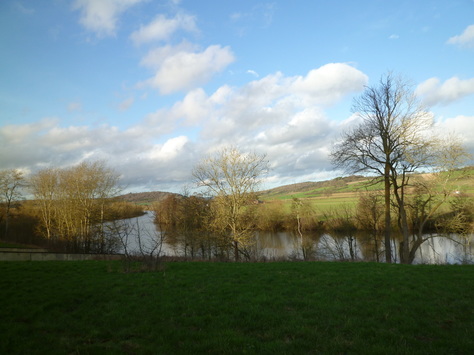 At last some sunshine!  My daughter, Kelly, is joining me for today’s walk as both of us are having the week off work. Her friend, Sian, was also going to join us but had to cancel at the last minute. So Kelly and I took the train to Maidenhead and, as the Marlow Donkey was not running, we boarded the replacement bus to Marlow.  We enjoyed the ride and what a difference the sunshine makes! Cookham looked inviting and the Thames was blue and sparkling!
On arrival in Marlow I made sure that we re-joined the path where I left it a couple of weeks ago.  Kelly knew where the ‘Burgers of Marlow’ café was (on the High Street near the bridge) and we headed there for coffee and cake. We weren’t ready for lunch yet but bought baguette sandwiches to eat later. The café was very busy – it seems to be a popular lunch spot for families.  I treated myself to a favourite Swiss creation, the 'Japonais Stückli’ while Kelly had a caramel and ginger cake.
Leaving the café we started the walk at a good pace. Kelly likes getting on with things and is quite a quick walker whereas I get constantly distracted. In my defence this was a day when I just had to take lots of photos. The river sparkled in the sunshine and constant points of interest (Bisham Abbey, the marinas and footbridges, Hurley Lock) together with a well maintained path (apart from a short muddy bit) made for pleasant walking - not to be rushed.  After Hurley there was a large meadow and equally large camping ground.  Bizarrely there was a sign advising picnickers that there is a charge of £3 per person to picnic here! Maybe it was because there were some animals (goats, Llama) nearby and the money raised was for feed (I’m being charitable).  The goats were lovely and friendly – the llama less so – it wouldn’t pause for a photo.  Eventually (after views across to Medmenham Abbey) the path veered away from the river allowing swans, ducks and other birds and wildlife space by the river.  We crossed a field past grazing sheep before going slightly uphill to the Culham Court estate, which includes a deer park, and here we enjoyed some good views to the Chiltern hills across the river.  This was the first time I went uphill since starting the Thames Path nearly four months ago and it made a pleasant change!  At Aston the path follows the road briefly leading down to the river where there used to be a ferry crossing.  Back on the riverside path we sat on a bench and ate our sandwiches while enjoying the river and Chiltern view. Soon we reached Hambledon Lock. There is a pedestrian river crossing here over the weir and it is only a short walk up the valley to the beautiful village of Hambledon.  I read somewhere that this whole village belongs to a Swiss banker!  I don’t know if that is true - maybe I’ll do some research on that.  Chrissie and I enjoyed a lovely walk in spring from Henley to Hambledon walking on both sides of the river and up and down a wooded hill.  I’m looking forward to doing a lot more walking in the Chilterns. The Chiltern Way is firmly lodged in my walk plans now.
We have now reached proper rowing territory.  Countless world and Olympic champions were members of one of the three rowing clubs we passed on the tarmacked path into Henley.  A few rowers were still on the river as the sun slowly set as we arrived in Henley.  It was lovely to walk with Kelly today. As well as enjoying the walk we also had some meaningful conversations. At Henley we headed straight to the train station for the short journey home as we had a party to go to in the evening.