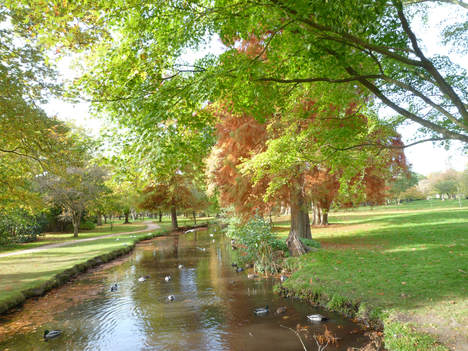 The arrival of winter time normally means an extra hour in bed but I thought the hour would be better spent walking so my watch and all the clocks in my house remained on summer time today. It was great to leave the house when most people were still in bed and I arrived in Kingston before the shops opened. Rather than go straight to the bridge I revisited Hogsmill Creek, the place where the Hogsmill meets the Thames. At this point the promised sunshine was absent but there were some breaks in the dark clouds. I crossed the bridge and soon arrived in Bushy Park.
It was a London Loop signpost in the beautiful woodland garden that inspired me to walk this path. That was in spring last year when I was captivated by the beauty of the gardens. Although the green, red, pink and purple colours have changed to autumnal red, yellow and gold, the park was no less beautiful as the now brilliant sunshine accentuated the colours. Before continuing the walk, I watched a herd of deer and stopped for a cappuccino and croissant on the outdoor terrace of the café. I was in no hurry to leave the park.
After the long and enjoyable walk past ponds and through heath, grass and woodland, it was with a mixture of regret at leaving the park and excitement at what lay ahead that I continued the walk. There now followed a stretch of roadside walking through leafy Teddington. Helping myself to an apple from a roadside box left by a kind resident, I strode along purposefully, wishing that there was a footpath through the golf course which was hidden on the other side of the road behind a narrow belt of trees and shrubs. There was eventually a short green interlude as the path passed between tennis courts, a sports club and Hampton Golf Course. I made good progress and soon reached Crane Park. From here to the end of today’s walk near Heathrow, the River Crane became an almost constant companion. I sat down on a bench to eat my lunch, becoming increasingly aware of the aircraft flying overhead. Crane Park riverside and woodland now provided pleasant walking. I stopped briefly by the Shot Tower and millstones – reminders that this used to be a place where gunpowder was made. The tower now contains an information centre for the adjacent island nature reserve, which can be reached and explored by crossing the wooden bridge by the Shot Tower. 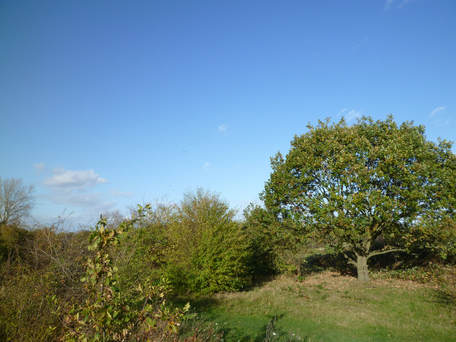 Hounslow Heath
​        Unfortunately, the Loop has to leave the River Crane when it reaches the busy A314 Hanworth Road. The walk along this long and straight walk seemed endless and I was relieved when at last the path left the road and turned left along the edge of a sports field before entering the big expanse of Hounslow Heath. Despite the proximity of a densely populated area and one of the busiest airports in the world, walking through the heath felt like walking through a wilderness, an untidy jumble of heath and grass, shrubs and trees which was strangely enjoyable despite the aircraft noise and a couple of unwelcome quad bikes motoring along the main path. According to the guidebook I had to turn left by a bench, but I wasn’t convinced that I turned at the right place because I couldn’t see a church tower ahead (as mentioned in the book) so at the next path junction I turned right but that didn’t seem right either. Thankfully the sun to the west and the planes taking off at Heathrow stopped me from going round in circles! I zigzagged through the Heath, glad now of the extra hour! When I eventually arrived by a river and a bridge crossing it I was relieved to have finally found the Loop path again. It was only about 3pm but the light seemed to be fading already so I pushed on with renewed vigour. The path followed the river Crane closely now and I was pleased to meet a couple of walkers, a father and son, map in hand, who were on the same walk as me. After exchanging a few words, I went ahead of them as I was in a hurry to get to Hatton Cross. I had to leave the Crane river when it reached the very busy A30 dual carriage road and walk along that road (it has a pavement) to finish the walk. That, together with the planes, made for a noisy and not particularly pleasant end to the walk and to make it worse I found that the busy Hatton Cross bus and tube station had no toilet facilities! I was pleased though that a bus arrived immediately to take me to Feltham train station. The luck stayed with me and my train home arrived five minutes later.
During an earlier walk I was advised by a walker that this section was not much fun and one to ‘get over with’. I agree that parts of it weren’t particularly picturesque but there was plenty of interest and variety. Another walker thought walking anticlockwise was better and he has got a point on this section as walking through Bushy Park and arriving in Kingston would make for a better ending. But on the other hand, I was not weighed down by tiredness and therefore fully able to appreciate the best part.
My highlights:Wildlife:Useful information
Transport:  Refreshments: Public Conveniences:
Click here for more photos from this walk
Continue to Section 8 (Hatton Cross to Uxbridge)