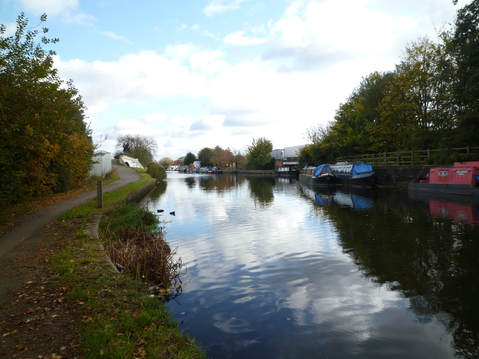 Grand Union Canal
​       Another beautiful Sunday in Autumn – just made for walking. Because of the limitation of Sunday transport in rural areas, it had to be a return to London. Although I don’t like getting up early on Sunday I know that to finish a long walk before dark means an early start is necessary. Today I left home in semi-darkness and freezing temperature but when I arrived at Hatton Cross the sun was shining brightly. I negotiated the traffic and jumble of roads and soon found myself back on the trail, walking along Crane Bank. The walking was pleasant but the planes flying overhead as they approached Heathrow Airport proved a constant distraction. I wanted to snap a clever photo of plane and walk (not kidding myself of its originality) but that meant that every time another jet approached I stopped to check the size of the plane and, if large enough, to point my camera upwards. This got me thinking: is the constant desire to snap interesting photos taking something away from the here and now enjoyment of simply walking and enjoying the scenery?
Finally, after sparing a thought for the residents, who have to live with the near constant noise, I left Cranford and, by the time I arrived at Cranford Countryside Park, I’d forgotten the planes and enjoyed some tranquil walking in this large open space surrounded by attractive woodland. The Loop path skirts along the side of the park and leaves by St Dunstan’s Church, looking particularly attractive in the sunlit autumn foliage setting. Here the Loop joins the Hillingdon Trail for the next few miles.
Soon the roar of traffic signalled the M4 and an underpass led to the other side. The route then found a way through a woodland before rejoining traffic in Hayes as it approached the Grand Union Canal. After a loopy walkway winding its way down to the canal side I enjoyed several miles of good walking on the towpath. The scenery changed from industrial to residential to rural. Eventually the Loop detours away from the canal to explore Stockley Country Park. This made for an interesting section of varied walking. The park was created on derelict land, which until as recently as 1985 was used as a rubbish dumping ground. It now consists of a modern business park, a golf course, woodland, meadows and hills. From the highest point there’s a wonderful 360 degree panoramic view. The park is divided into two parts by the busy A408 Stockley Road, which the walker crosses on an impressive footbridge. Following the path downhill through woodland, the path then continues pleasantly along a corridor of birch trees as it winds its way through another newly created and attractive parkland, commemorating the area’s brickmaking history, before rejoining the Grand Union Canal at Yiewsley.
At Cowley Peachy Junction the Loop turns away from the main Grand Union Canal to follow the disused Slough arm. This section contains some interesting canal engineering, e.g. an aqueduct over the Freys River. After crossing a bridge the path continued through woodland to arrive at the Little Britain lakes. These were teeming with water birds but I had no time to stop and stare as the sun already seemed to dip low. The path now followed the River Colne all the way to Uxbridge. The last mile of the walk or so into Central Uxbridge was another section along the Grand Union Canal towpath. Although the boats weren’t going anywhere, the boat owners seemed to be extremely busy repairing, painting etc their boats and I found the acrid smell of burning wood quite overpowering. From the canal it is just a short walk to the busy Uxbridge town centre.
​
My highlights: Wildlife: Useful information
Transport:  Refreshments:  Public Conveniences:
Click here for more photos from this walk
Continue to Section 9 (Uxbridge to Moor Park)