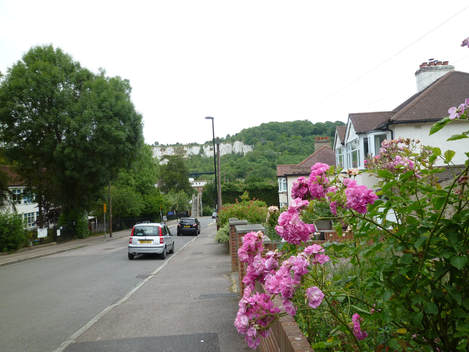 Looking back towards Riddlesdown
Saturday 15 July 2017

The weather forecast predicted cloudy and muggy but mainly dry weather, with some brighter spells in the afternoon. That was good enough for me to tackle the next section of the Loop. I set off early, knowing that this would be a long day – more than 10 miles of walking and nearly three hours travelling each way! The journey was ok although I struggled to find the bus stop in East Croydon. It all looked so different from how I remembered it! Eventually I did find a bus stop at which the 403 stopped. It wasn’t too long before the bus arrived and a good half hour later I arrived at Hamsey Green.
After following the road out of the village, I soon found myself walking on lovely grassy paths on Riddlesdown. When the main path entered a wooded area, I chose to walk on the parallel mown path on the meadow to enjoy the views and flowers. The path then turned left along a hedge before joining another delightful grassy track. I chatted briefly to a young woman who was walking her dog. She is now thinking of doing the Loop herself! The route then followed the Old Riddlesdown Road, crossing over a railway track, and leading down to a main road (A22) in Whyteleafe. Ahead of me I spotted what was surely another London Loop walker – he was carrying a large backpack and wore a floppy hat! I watched him cross the road and disappear along a minor road opposite. Sure enough, that was the route of the Loop. After crossing more railway tracks on a footbridge, the route went steeply uphill, first along the residential road and then on a footpath to emerge on Kenley Common. I think this was the most strenuous uphill ‘climb’ of the route so far as London encroaches on the North Downs.
Kenley Common provided more pleasant chalk down walking. To the left of the path is Kenley Airfield from where Spitfires took off during the Battle of Britain in WW2 and the Luftwaffe dropped bombs. Today, thankfully, it is peaceful and the field is used as a glider training school.
After leaving the common, the path continued through meadows, on roads and along hedges to Old Coulsdon. A light drizzle descended on the area. It was not heavy enough to pull the cagoule out of the backpack and quite refreshing on this muggy day. I quickly walked through the built-up area of Old Coulsdon and Coulsdon Common. After passing the Fox pub (which rather temptingly advertised Pizza and Prosecco at a special price) I continued along the lane towards Happy Valley. The drizzle stopped and the skies brightened considerably, which was lucky, as it allowed me to stop for lunch at a conveniently placed picnic table, as the path emerged from the trees to reveal the idyllic Happy Valley. This area seemed, not surprisingly, to be a popular area for hikers and dog walkers. My path descended into the valley before rising again to open up great views over the valley. It then entered Devilsden Wood before emerging by a road and car park on Farthing Down. Here there were some public toilets – a rarity on country walks. After stopping briefly by a round bench to read the information boards I continued walking along the ridge towards ‘The Folly’ – a place where paths meet and a landowner planted seven beech trees in 1783 (a moderately interesting piece of information I learnt from my guidebook). From the top of Farthing Down I could make out the Crystal Palace transmitters, the large skyscraper in Croydon, and, just about, the Shard and other City buildings. Today the weather was far from ideal for grand views but I imagine they would be amazing on a clear day. 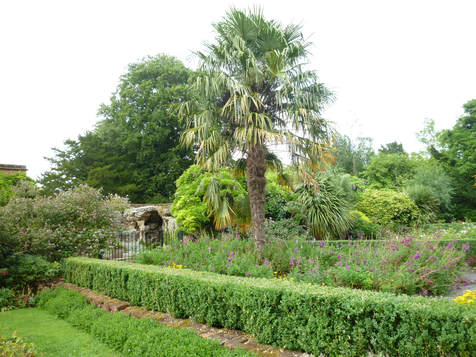 Oaks Park
There now followed a longish stretch of road walking through Coulsdon. I passed a house where a barbecue party was in full swing. I found the aromas wafting from the garden and the loud music uplifting and with a new-found spring in my steps I walked briskly uphill. Unfortunately, I missed the turn into a hedged path and had to backtrack when the road ended at a gate with a ‘private – keep out’ sign. I don’t know if it was tiredness that made me miss another turn, or maybe I just had my head in the clouds, but when I reached a road I realised that I must have gone wrong somewhere because I missed the ‘spectacular views towards central London’ and the ‘many neat little semi-detached farm houses of a uniform black weatherboarding and white window frames….’, (guidebook). It was too late to go back and I was pleased to see lots of people entering what I thought was a garden centre with a café. Then I saw the lavender – rows after rows of purple flowers as far as I could see! I bought some lavender lemonade (delicious and refreshing) and crisps before joining the ‘hordes’ of people among the lavender. Some were taking photographs, others were simply wandering about, relaxing or meditating among the fragrant plants. Luckily for me, the official loop path goes straight through the lavender field so I didn’t need to find my way again. Just across the road I entered Oaks Park. This park was owned by the Derby family and is where the name of the famous Epsom horse race ‘The Oaks’ originates from. Legend has it that the Earl of Derby and Sir Charles Bunbury tossed a coin to decide on the name for a new flat race at Epsom Downs. Thankfully the Earl of Derby won otherwise we would now have The Bunbury.
I now needed to press on to catch the 6.37 train from Banstead. The path soon led gently uphill on a pleasant bridle path to reach a golf course. Here I met the Loop walker I spotted earlier. The young man was going to set up camp – and what a lovely evening to do so as the late afternoon sunshine cast a wonderful glow. We chatted for a while about our respective Loop experiences before I continued on my way to Banstead.
Having ‘wasted’ time chatting, it was now touch and go if I would make the train. Two things conspired to make me miss it: first I waited for what seemed like ages before I was able to cross the very busy A216 Brighton.Road and then, continuing through the golf course, I struggled to find the way out of it! When I reached the station, I was initially thrilled to see my train still listed on the board (I was only two minutes late - it must have been delayed), but this was swiftly followed by disappointment when the board went blank. I went off in search of food and drink and found a Coop that was still open.
Finally, after four trains (including tube) and a bike ride I arrived home at 10.30 pm! Was it worth it? Of course it was!
My highlights: Wildlife:Useful information
Transport: Refreshments:Public Conveniences:
Click here for more photos from this walk
Continue to Section 6 (Banstead to Kingston Bridge)