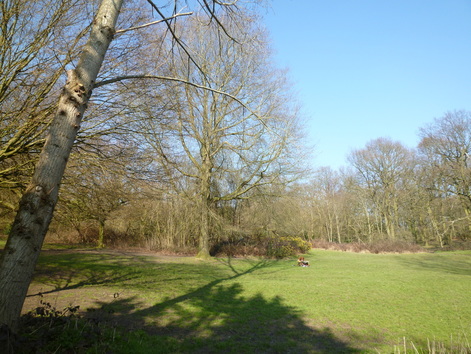 At last we've got some beautiful weather and it hasn't rained for at least three days now! What’s more, the high pressure is here to stay for a while. For me that means that the footpaths will dry out and I’ll be able to resume walking in more rural surroundings.
For now though, it was a return to London Town and the Capital Ring. Fate conspired to ensure that Crystal Palace had loomed large in my mind all week. On Friday evening my football team RFC played Palace in the FA Cup quarter final at the Mad Stad but sadly we lost 2:0. What made the defeat worse was that the current Crystal Palace manager, Alan Pardew, started his managerial career at Reading but left when a better offer came along. It felt like a betrayal at the time and although it was long time ago I guess I still haven’t completely got over it! So to exorcize this particular demon I reckoned that walking away from, and forgetting, Crystal Palace was the thing to do.
My daughter Kelly joined me for today’s walk. I was keen to show her the dinosaurs but she wasn't nearly as impressed by them as I thought she might be, telling me that she’s not a five-year-old boy! (To be fair, she is a thirty something woman.)
Apologies for the lengthy introduction – I think I felt the need to get something off my chest!
So we arrived at Crystal Palace train station and after a quick tour of the park (past the dinosaurs, of course) we set off on the Capital trail. The first part was surprisingly hilly – we walked along roads to a lofty plateau (Belvedere Road) before descending through Westow Park, leaving Crystal Palace (and pretty Crystal Palace Triangle) behind. We were now in the district of Norwood and continued along Upper Norwood Recreation Ground. Sadly, not much is left of the Great North Wood (from which Norwood takes its name). Leaving the recreation ground we walked uphill to another ‘ridge’, Beulah Hill. This was a busy road and quite tedious to walk along, but there was a reward of a good view of the ‘Shard’ and City skyscrapers.  Eventually, to our relief, we were able to leave Beulah Hill and turn southwards down Biggin Hill. We passed Dickens Wood Close (used to be Springfield) where, according to my guide book, Dickens stayed and this was the scene where David Copperfield met Dora Spenlow. From here we had views of Croydon (impressed?), and the North Downs were just about visible.
We now turned westwards and entered Biggin Wood, a remnant of the Great North Wood. This was delightful walking – well earned after the lengthy road walking. All too soon we left the woodland and after another stretch along a road we entered Norwood Grove. We followed the path up the hill (‘musical’ background provided by parakeets) through a pretty woodland and garden to reach the Norwood Grove mansion (also called The White House, for obvious reason). I should mention here that the mansion was built for Arthur Anderson, joint founder of P&O, MP for Shetland Islands and a keen early supporter of Crystal Palace (thought I’d left that behind!). We stopped for lunch here. There were plenty of benches to choose from and a robin provided the entertainment. Refreshed we continued walking and seamlessly entered Streatham Common. After a short detour through the pretty Rookery gardens we continued downhill through the Common to reach busy Streatham High Road.
There now followed another fairly long section of pavement walking – the tedium only occasionally lightened by an architectural oddity. Eventually we reached the next green space – Tooting Bec Common.  If today was a hot Summer’s day I would have been tempted to have a dip in the Lido. There is also a lake in the park (as well as a café and toilets) but we decided to carry on walking and not to stray off the path.
Leaving Tooting Bec Common (love that name) we were back walking along pavements towards Balham. We started talking about cakes – the thought of a nice cream cake kept us going. The path now followed the London to Brighton railway line into Wandsworth Common and interestingly passed right through Wandsworth Common Station. We passed a pretty duck pond with a boardwalk and then headed for the Skylark Café and the long-awaited and well-earned tea and cake. They didn't have any cream cakes so we made do with a very yummy muffin (blueberry for me, chocolate for Kelly). I sometimes think I love walking because I can then enjoy a guilt-free cake.
Refreshed, we left the Capital Ring and headed for nearby Clapham Junction and the train back to Reading, or rather, train to Ascot and rail replacement bus to Reading.