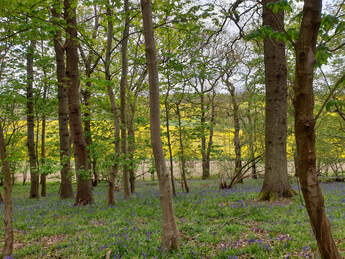 Friday 7 May 2021
​When I started walking the North Downs Way in January 2019 (see report below) nobody could have foreseen that a year later a virus would completely change the way we live our lives. Now, another year and three lockdowns later, the coronavirus pandemic, although still claiming many lives worldwide, is in retreat in England. The virus is still circulating and worries that new strains could yet jeopardize the progress made are never far away but, fingers crossed, the vaccine (I've now had two doses) and continued vigilance will mean further lockdowns can be avoided.
As a first non-local walk since September last year, I decided to start the NDW again - just because it was easy to get to and fro and I didn't want to go too far. As I am now an OAP and can travel on weekdays there was none of the kerfuffle I experienced last time with the Sunday trains/replacement bus. Changing trains at Ash was straightforward and I arrived at Farnham soon after 10am. 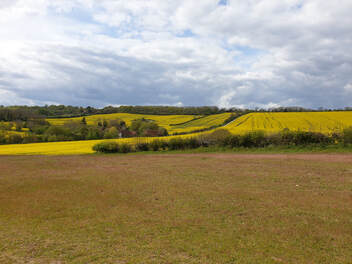 The walking was lovely in the bright spring weather. Bluebells brightened the woodlands and, not having to rush because of the longer days, I treated myself to a drinks stop at the pub in Puttenham and a tea break at Watts Gallery. I guess I'll get used to the complications of contact form filling, mask wearing etc! Must admit that I haven't downloaded the NHS track & trace app yet but may do so now as it would eliminate the need to fill in forms by pen.
This is all I'll write about this walk, and I've hardly taken any photos, preferring to simply enjoy the experience. 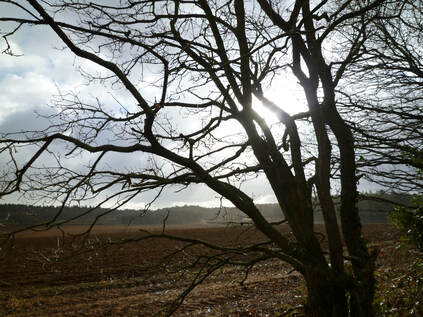 I set off with the usual excitement of starting a new trail. What wonders, difficulties, surprises and adventures await on the walk from Farnham in Surrey to Dover in Kent? Well, for a start, the train journey to the start of the trail in Farnham didn’t turn out quite as straightforward as I’d hoped. I missed the connection in North Camp because, instead of taking out the map and finding the most direct walking route to Ash Vale Station, I followed some misleading directions from a passer-by. Eventually I arrived at Ash Vale Station to find that rail replacement buses were in operation. The station was deserted and there was no sign pointing me in the direction of where the bus would stop. Nobody in the nearby Tesco Express had any idea but they did point me to the bus stop outside the shop and two ladies there confirmed that the bus would stop here. It was freezing – mainly due to the wind chill factor. I put on my emergency anti-hypothermia hat and ate one of the two chocolate bars I bought in Tesco’s while waiting. The bus arrived roughly on time and I was pleased to find it well-heated. It made its way to Farnham Station via Farnborough and Aldershot and, after using the public convenience, I set off walking. The trail starts just a couple of minutes from the station by the busy A31 and at last I was on my way!
The trail soon veers away from the road and continues along the River Wey for a while and then gently uphill through woodland and countryside. After passing the elaborately carved North Downs Seat (there’s another one at the end of the trail) I made good progress and, after crossing the river Wey at Moor Park and following the road uphill, I enjoyed the breezy walk which, for the first time today, felt like proper downland walking. Soon I entered Runfold Wood Nature Reserve and then continued along Sands Road to Farnham Golf Club and then along Blighton Lane. Eventually a footpath turned away from the road and I loved walking along this path – not because of the scenery but because it was teeming with small, colourful birds. I wish I was better able to recognise and name the birds! I guess they were finches. The sun was now shining and the trail followed field edges for quite a while. As it passed a large field, I again enjoyed the birdlife – here they feasted on the leftovers after the pumpkin harvest in the autumn. 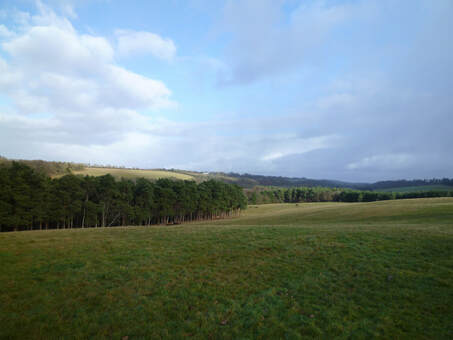 View towards the Hog's Back
​          The path now continued within the large Hampton Estate. I particularly enjoyed walking in the woodland of Payn’s Firs. The sun was shining and it felt almost spring-like. However, on this cold, blustery day, that would soon change. As I emerged from the forest and started walking along a lovely grassy path with views across a valley towards the Hog’s Back ridge, storm clouds had caught up with me, and it started raining! Just as soon as I’d managed to put on my waterproof over-trousers in gale-force winds, struggling with zips, poppers and a plastic bag, the sun re-appeared from nowhere and the wind dropped. The scenery was transformed into something almost spectacular and I felt on top of the world. After the down views I walked through some lovely wood and heathland to reach Totford Hatch. Unfortunately, I soon encountered some serious mud as the trail continued on a BOAT (byway open to all traffic) through Puttenham Common and I reached a metalled track leading to Puttenham. The skies were grey again and on this winter’s day the light was already fading when I reached the village. Puttenham is a proper village with a church, school, pub and a village green. It also has a camping barn and would therefore be a good overnight stop for ‘though-hikers’.
Shortly after crossing the main road, the route continues first alongside a golf course, then past a vineyard (Greyfriars) and some large houses among trees (Monks Grove) through Puttenham Heath. I made good progress now and soon reached Watts Gallery – a lovely place for a break. I removed my muddy boots to walk around the gallery shop with its beautiful things with hefty price tags. Seemed like a great place to buy a special gift for someone deserving. My spending was limited to a pot of tea in the café.
I set off with renewed energy and positively relished the walk uphill along a sandy path and then alternating between open fields and woodland. I enjoyed some nice views, north towards higher downs and south towards the Loseley Park estate, as the sun was setting. It was quite dark when I arrived in Guildford and I used intuition and the bright lights, rather than the map, to find my way into the city centre and the railway station. As I waited for the train, hungry and cold, I remembered the chocolate bar I’d bought earlier and greedily devoured it. Pleased to report that the journey home was straightforward.
My highlights:
Wildlife:
Useful information
Transport:
Refreshments:
Click here for more photos from this walk
Continue to Section 2: Guildford to Dorking