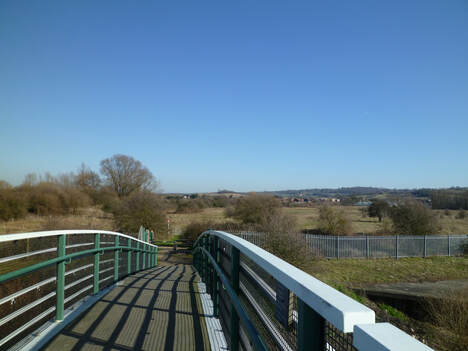 Footbridge over Horsemill Stream, Sewardstone Marsh
Sunday 24 February 2019 - Part 1: Enfield Lock (Turkey Street) to Chingford
​
There were no trains to Enfield Lock, so I started the walk at Turkey Street station. Before describing the walk, I must mention that from the train I had a good view of the new Tottenham Hotspurs stadium and it looked magnificent in the sunshine. The weather today was unseasonably warm with temperatures up to 20°C in London. Winter temperature records were in serious danger of being broken and I set off walking under a blue sky and not a cloud in sight.
I walked briskly with an unsurprising déjà vu along the Turkey Brook. The brook here has lost its natural prettiness; the banks are encased in metal and, judging by the amount of litter, it appears that it is not much loved by the locals. Before crossing the A1055 via a very long footbridge, I stopped for lunch sitting on log in a play park and enjoying the warm sunshine. Resuming the trail, I soon arrived at the Lee Navigation and, after crossing the canal at Enfield Lock and following it for a very short stretch, continued along another channel of the river Lee (or Lea?), walked across a couple of bridges and continued through Sewardstone Marsh. After crossing another busy road, the A112 Sewardstone Road, the walk took on a different character as it headed first through a large grassy field and then up a hill! I was so excited about the uphill walk and the views from the top that I took the wrong path (the steeper one). It felt great to give the lungs a bit of a workout and it was only when I got to the top that I realised that I was too high up and there was no path across to where I should have been. After admiring the view towards the King George Reservoir and across the Lee Valley, I descended cross country (hate backtracking!) towards where I thought I should be but was hindered by an impassable hedge of shrubs. As I zigzagged around the obstacles, I disturbed a herd of deer and seeing them scuttle away made up for the unscheduled detour. Soon I reached a track which seemed to go in the right direction, and I was pleased to spot a London Loop sign shortly afterwards.
The trail now continued pleasantly through small woodlands and grassy fields to head towards a road. Unfortunately, I missed a left-hand turn and arrived at the road too soon. It took me a while to get my bearings and I had to reluctantly consult my map (reluctant because of the nuisance of having to remove my sunglasses (can’t read wearing them). After the unwanted extra road verge walking I reached Carroll’s Farm where I should have emerged, and, after crossing the road, was pleased to be able to follow a woodland track running parallel to the road, despite the occasional mud. Eventually the path turned right along the drive to Gilwell Park, a Scout Association campsite and conference centre. On reaching the centre, the trail continued along a muddy bridlepath, then turned right on a woodland path before emerging to reveal great views across a valley towards a remnant of Epping Forest, and I could even make out some London skyscrapers in the haze of this breezeless day. The path now dropped down into the valley before rising again to reach The Hawk Wood. Here I took a wrong turn – misled, I think, by an unclear Loop sign and a multitude of paths. Should have followed my instinct rather than too far go too far right. I asked an elderly gentleman for directions to Chingford. This led me to a main road and a lengthy stretch of road walking. By the time I reached Chingford Station it was nearly 4 o’clock. I considered getting on the next train to Liverpool Street and abandoning the walk for the day but I figured that if I walked quickly I could just about get to Chigwell in daylight. However, when I reached Queen Elizabeth’s Hunting Lodge, overlooking Chingford Plain, I couldn’t resist stopping for a mug of tea and decided to call it a day, returning to Chingford Station. 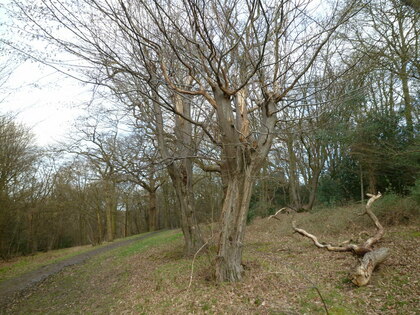 The Hawk Wood
Saturday 2 March 2019 - Part 2:  Enfield Lock to Chigwell
​
​              Having had to cut short the walk last Sunday rankled with me, and this Saturday provided the opportunity to put things right and complete the unfinished business. The February heatwave has given way to more normal weather for the time of year. I did consider resuming the walk at Chingford but, because of the wrong turns taken last week, and a better Saturday timetable, with trains stopping at Enfield Lock, I decided to restart at Enfield Lock station.
Rather than walking along the Loop link route back to the Turkey Brook, I followed the road until I reached the Lea Navigation towpath. This gave me the opportunity for a longer stretch along the canal as I didn’t need to see any more of the Turkey Brook. The breezy weather with sunshine and variable cloud made for wonderful walking. I made good progress and had no problems finding the correct route this time. After stopping for a snack in Sewardstone Marsh, I relished the walk up Barn Hill on the proper Loop path. I also found the woodland track to Carroll’s Farm and so avoided the lengthy road verge walking. After passing Gilwell Park I was especially glad to have decided to repeat this part of the walk as the clearer atmosphere provided some fantastic views towards Epping Forest and the City of London. This time I walked along the woodland edge (rather than on the path just inside the woods). After admiring the views, I walked downhill along a hedge to the valley floor before striding up to the Hawks Wood. There was no chance of getting lost this time and the walk on top of the hill through the woodland provided one of the highlights. I watched two woodpeckers courting and an incredible number of smaller birds – I think they were finches, maybe chaffinches by the colouring – all enjoying the early spring sun in the coppiced woodland. I regretted not having brought my binoculars.
After reaching and crossing a road I had to leave the magical woods and follow a riding track leading to Chingford Golf Club. On reaching the carpark and clubhouse, I was at last back to where I abandoned the walk last week. I stopped at the Tee Café for a yummy lemon cake (served with a large dollop of whipped cream) and coffee before continuing the walk through Chingford Flood Plain and past Queen Elizabeth’s Hunting Lodge. The path now crossed grassy fields and wooded areas. There were a few muddy stretches and signposting was not great but I did manage to avoid the mud and arrived on the outskirts of Buckhurst Hill without further route finding problems. After walking along a lovely path with views across a valley the Loop descended to arrive at the Central Line tracks and I, rather wearily, crossed over on the steel footbridge. I had now arrived in Buckhurst Hill. First the Loop continued through a residential area and then through the Roding Valley Recreation area to arrive at the shore of a pleasant lake – a haven for ducks and swans as well as residents. The lake was created when gravel was extracted to build the nearby M11. After passing the lake and following the river Roding on a muddy path for a while I soon reached Birds of a Feather territory. The last section of the walk took me along a busy road that crossed the M11. The view across the Roding Valley and towards the distant London skyscrapers as the sun was setting behind dark clouds made up somewhat for the tedious road walking. I now entered Birds of a Feather country, passing impressively large houses and cars to match as I arrived in Chigwell. I found the bus stop (the tube station was closed) and was pleased that a bus would arrive within five minutes. It did – but didn’t stop! I was furious as the driver must have seen me! Anyway, at least there was a shop close by so I could buy some much needed refreshment. Twenty minutes later another bus arrived. This time the driver can have been in no doubt about my intention of getting on the bus as I waved frantically.
My highlights:
Wildlife:
Useful information
Transport:
Refreshments:
Click here for more photos from this walk
Continue to Section 14 (Chigwell to Harold Wood)