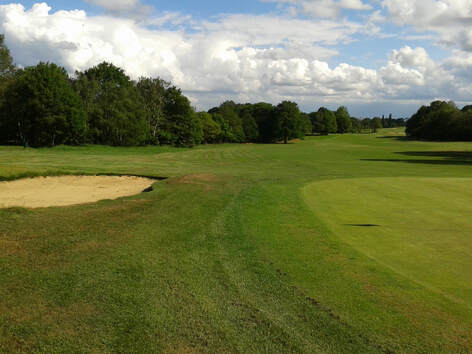 I was not expecting travel problems on this working day. However, the journey to Chigwell took a long time. Not many underground trains service Chigwell tube station so, after waiting a while for such a train, I decided to go to Buckhurst Hill and hop on a bus to Chigwell instead. Walking at this time of year is great because even a long walk can be completed before dark and there’s no need to get up early either.
It was past lunchtime when I started walking and, although I was not looking forward to the Chigwell part of the walk, I was pleasantly surprised by the rather pleasant centre of the town (apart from the heavy traffic). I spotted rabbits in the graveyard of St Mary’s Church, and passed some pretty cottages, before a footpath led away from the main street and into open countryside. There were some dark clouds gathering as I walked along tracks and through fields but I was lucky enough never to catch one of the forecast showers. In fact, the breezy and cool weather made for fantastic walking and I had a spring in my step as I soon reached Hainault Forest Country Park. The Park is what remains of what was once a vast royal hunting forest. It is a mixture of wood and grassland and there’s also a lake, café and farm animal zoo. These facilities are not directly on the Loop but I was ready for a break and a coffee and was not deterred by the short detour.
Now, the problem I have with Country Parks, is that I usually lose my way because of the many paths criss-crossing a quite large area and I find it very easy to get lost in thoughts and to start daydreaming when the walking is easy. So it was no surprise when I found myself in the middle of the woods, when I should have crossed a golf course! Looking at the map I realised my error and had to go back in the direction I came from and things did soon become clear as I spotted the entrance to the golf club (including a London Loop way marker). The sun was now shining, birds were singing, and no flying golf balls were endangering my walk. The trail continued through farmland as it made its way towards another country park. Admiring the views, it would have been easy to forget that this walk lies within the greater London area but for one lone tower block in nearby Romford. I again did not pay enough attention to the route but more by luck than skill I found the Loop trail again in Havering Country Park thanks to the giant redwoods that graced the park. Leaving the woods, and after admiring further great views across the Roding Valley countryside, I arrived in the hilltop village with the unusual name of Havering-atte-Bower. From here there were some wonderful views towards Romford. I realise that I mention views a lot and these would not have been half as amazing if it wasn’t for this clear and breezy day.
After leaving Havering-atte-Bower the walking became even better as it dawned on me that, given the right conditions, a walk in Essex can be as exhilarating and beautiful as any walk in the world! As well as the general loveliness of this area, I spotted, in quick succession, a herd of deer, a couple of play-fighting young foxes and a pair of pheasants.
As it was now well after six o’clock I had leave the magic behind and continue on my way towards Harold Hill. After reaching a lane called Paternoster Row the trail follows this lane for a while and then continues on a pleasant footpath to Harold Hill. Soon the Loop finds a way along Carter’s Brook but with the light fading I found the path a little spooky and decided to follow the road. I rejoined the Loop through and out of Central Park, still following the brook. I now became aware of more and more purple ribbons tied to railings and trees and was shocked to realise that the Loop passes right next to the playground where a few months ago a young woman was fatally stabbed. How could this happen in a place like this where children were playing, dog walkers were out walking their dogs and everything seemed so normal?
The walk ended at Harold Wood Station and the journey home gave me time to reflect on the wonderful walk with a disturbing end. I now look forward to returning here for the final stage of The London Loop.
My HighlightsWildlife:Useful information
Transport:  Refreshments:
Click here for more photos from this walk