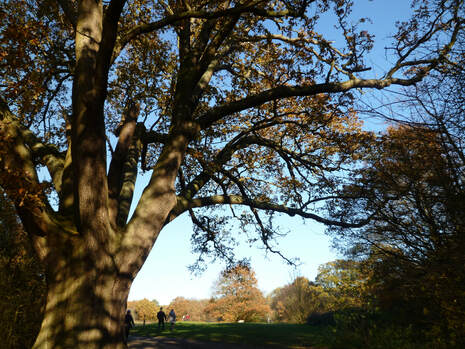 Enfield Chase country
Sunday 18 November 2018
​
​        I had a very busy day yesterday (including running my first ever Parkrun!) and was therefore hoping for a horrible, rainy day today so I could justify a lazy day at home. However, the sun was shining and a beautiful sunny and mild autumn day dawned. I got up early and travelled by train and underground to Cockfosters. As the Loop passes by the tube station I was immediately back on track and soon out in the beautiful countryside as the trail leaves ‘London’ alongside a cemetery. Soon after enjoying some great views and fine walking on a grassy path, the Loop enters the very popular Trent Country Park. I stopped at the café for a cappuccino (sadly it was far too early to indulge in one of the tempting cakes on offer) and then walked along a beautiful woodland path among trees looking resplendent in the autumn sunshine. Leaving the park land the walk continues through Enfield Chase country on an uphill path with some lovely views across the valley before re-entering woodland. I stopped briefly for a snack at Camlet Moat and then, after reaching (and crossing) Headley Road the trail continued gently downhill alongside farmed fields, first on the Jubilee Path, and then, after reaching the valley, followed Salmon’s Brook. Although this area still lies within Enfield Chase, since crossing Hadley Road I only saw one person – a runner and his dog – before I reached The Ridgeway, a main road leading to Enfield.
After crossing the road, the Loop continues along a farm track, crossing the Turkey Brook for the first time. At Clay Hill the Loop enters Hilly Fields Park and a pleasant grassy path leads downhill to reach Turkey Brook again and then, for the next few miles, it follows the brook all the way to Enfield Lock, with just a short deviation up and down a hill – presumably for the view. I enjoyed some delightful walking alongside the brook as the sun was slowly setting, and was pleased to be sharing the path with families walking or cycling. After passing some ponds I briefly left the Turkey Brook walk to visit the nearby Forty Hall, an impressive mansion designed by Inigo Jones, and now managed by Enfield Council. It would have been nice to stop for tea and a walk round the gardens at the back, but, on this late autumn day, I had my usual rush to reach the end of the walk before complete darkness. However, I did make time for a walk round the lake at the front of the building and enjoy the views down to the Turkey Brook valley. A nice place for a wedding – a just married couple were having their photos taken by the lake as the sun went down.
Back on the trail I soon reached a more urban area, arriving in Enfield. Although the Turkey Brook was now not always visible, the Loop still continued more or less alongside it. Soon I had to cross the multi-lane Great Cambridge Road. Not as scary as it sounds as there was a footbridge over it. After walking along a large crematorium cemetery I arrived at Turkey Street Station and shortly after reached a proper London street, Hertford Road, with its collection of shops, take-aways and restaurants. It was now nearly dark, and I hurried along to my destination, Enfield Lock Station, to find it deserted – no trains were leaving today! A nice young man investigated (on his phone, of course) alternative travel options and was able to confirm that trains were running (half-hourly) from Turkey Street station so I legged it back (along the main raid rather than the lonelier path between Turkey Brook and Albany Park) to Turkey Street. The scheduled train arrived on time and the journey back was not too bad but due to a cancellation of a west-bound train out of Paddington I spent the last leg of the travel sitting on my backpack in the bar area of the train.
My highlights:Wildlife:Useful information
Transport:  Refreshments:
Click here for more photos from this walk
Continue to Section 13: Enfield Lock to Chigwell