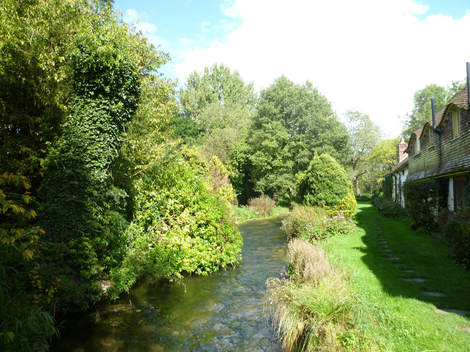 ​  This last section is quite short and because of the bus situation, i.e. the only suitable bus from Winchester to Itchen Abbas was the 9am (Stagecoach 67), I decided to start the walk at New Alresford. There is a fast half hourly bus service from Winchester (Stagecoach 64) stopping at New Alresford. The knowledge that a delayed or cancelled train would not ruin my plans, soothed my nerves and ensured a good night’s sleep the night before. Sometimes a few extra miles in exchange for better transport connections are well worth it.
I arrived in New Alresford just after 10 and started walking straightaway, resisting the temptation to stop at the Caracoli Coffee Shop. I chose to return to the Three Castles Path by walking along the Wayfarers Walk to the point on Itchen Stoke Down where several paths meet. An extra bonus was the beautiful walk along the River Arle and I also enjoyed the gentle uphill walk leading to Itchen Stoke Down. The sun hasn’t yet made an appearance but equally there was no threat of rain and it was perfect walking weather.
So, finally I was back on the Three Castles Path, and I walked briskly downhill to soon arrive at the New Alresford to Winchester road and this time I made sure that I followed the instructions in my guidebook carefully to arrive in Itchen Abbas from the ‘correct’ side and avoiding any walking along the main road. I stopped for a brief rest by St John’s church before continuing the walk, which now (and all the way to Winchester) followed the beautiful river Itchen. That is not to say that it was a riverside walk all the way. The path meandered through the valley, crossing meadows, detouring through beautiful villages, passing under a busy motorway and A road, and generally, was full of interest and variety.
The sun was now shining beautifully and there was no sign of the rain showers that were forecast. The best river Itchen views were at the point when the path crossed the two arms of the river at Martyr Worthy. From the bridge I spotted several trout swimming in the crystal-clear chalk stream. Soon I reached the beautiful village of Easton. After admiring the delightful thatched cottages, I resisted the temptation of stopping for a lemonade at the village centre pub and instead helped myself to an apple from a basket left outside the aptly named Appletree Cottage for thirsty passers-by. Thank you – that was much appreciated.
Shortly after passing under the M3 motorway I reached a footpath junction where one path led off to the right past the idyllic Fulling Mill cottage towards the villages of Abbots Worthy and Kings Worthy. The guide booklet recommended that, given the time, the villages would make a worthwhile detour. The scenery here was lovely, the motorway noise had abated, and the day turned into a beautiful afternoon so I decided to follow the advice. After crossing several streams, which, I guess, were all arms of the river Itchen, I reached Abbots Worthy. Several villagers were chatting in the streets and I enquired about whether there is anywhere in the village where I could buy a cup of tea or an ice cream. The answer was regrettably no, but then a lovely lady offered to make me a cup of tea (and the use of her bathroom) and I couldn’t turn down this generous offer. I spent a lovely half hour or so chatting with Susie over a cup of tea and a chocolate bar in her beautiful garden. It transpired that she was half Swiss and recognised my accent! I really appreciated Susie and her husband’s hospitality and this made me wonder whether I would open my home to a passing stranger. Anyway, I was now suitably refreshed and ready to tackle the last few miles. But first I wandered around a large garden, which another local woman opened to the public this afternoon. So, my lasting memory of this village will be of the friendly people inhabiting it.
Back on track, I soon passed under the A33 and the path now followed the river Itchen into Winchester and took in the best historical sights of this fascinating city. I particularly enjoyed wandering through the ruins of Wolvesley Castle and walking alongside tourists through Kingsgate into The Close and across Cathedral Square. The walk finished at the medieval Great Hall. As I reached the end, the promised rain finally made an unwelcome appearance but the resulting rainbow contributed to a fitting finale to what was an incredibly diverse walk.
My highlights:Wildlife:Useful information
Transport:  Refreshments:Public Conveniences:
Click here for more photos from this walk