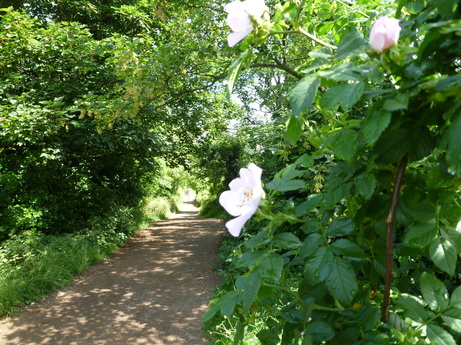 Euro 2016 is now well underway and, rather predictably, England fans caused mayhem in Marseille yesterday (to be fair they were attacked by some Russian thugs). The actual game ended in a disappointing one all draw. Russia equalised in stoppage time which made it feel like a defeat. That, together with my worry over 'Brexit' meant that I needed to do something to lift my spirits. So, despite the dodgy weather, I set off for London to continue the Capital Ring Walk. My thoughts soon turned to happier events, e.g. the Queen’s 90th Birthday which is being celebrated this weekend. The Sunday morning drizzle would no more put off the well-wishers at their picnic lunch in The Mall than it would stop me from enjoying my walk.
The journey to East Finchley was straightforward and I was soon walking through pleasant woodland parks. First there was Cherry Tree Wood, followed shortly after by Highgate Wood. It is great that these substantial woodlands have survived in such a densely populated area of London. I lost my way in Highgate Wood (due to loss of concentration on my part rather than lack of signposting).  I only realised this when I arrived at the wrong exit gate leading to the wrong road. I thought it best to backtrack rather than risk getting completely lost by relying on my sense of direction! The drizzle had now stopped and after leaving Highgate Wood and crossing Muswell Hill Road the path entered the third wood, Queen’s Wood. The drizzle had now completely stopped and the sun was trying to peek through the clouds. I enjoyed walking through the surprisingly hilly terrain of Queen’s Wood.
Looking at the map, I was not particularly looking forward to the next section as there appeared to be a distinct lack of greenery. However, I was to be pleasantly surprised. Soon after leaving Highgate and the busy Archway Road, the Capital Ring joins the Parkland Walk. This walk follows the course of the disused Edgware, Highgate and London Railway for two miles. My guide book tells me that if it wasn’t for local activists, working with Haringey and Islington Councils, then this line of greenery could have been turned into a motorway. Well done to the people involved in the creation of this walk. It became London’s longest linear park. I, along with joggers, cyclists, walkers and families out for a Sunday afternoon stroll, enjoyed the peaceful surroundings. The remains of the abandoned Crouch End station and other old relics, even the artistic graffiti, add interest to this section. 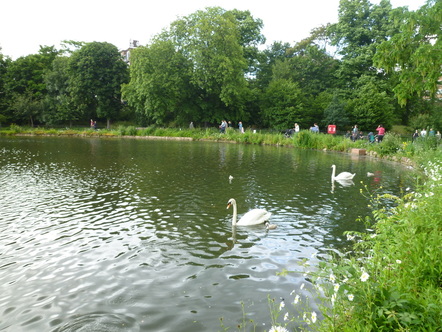 Swans in Clissold Park
At the end of the Parkland Walk and after crossing the East Coast Mainline I entered Finsbury Park. There’s a nice café here and I was ready for a coffee. Leaving the park, I complacently followed my nose rather than check directions or look for Capital Ring sign posts. I walked along lively Green Lanes and couldn’t resist buying some lovely Turkish apricots, cherries and nuts.
​Back on track, the Capital Ring walk now joined the New River Path. There was plenty of interest along this little river but what I enjoyed most of all were the pretty cultivated wildflowers which brightened up the riverside. I passed the two Stoke Newington reservoirs (East and West) and an old pumping station that looks like a castle and is now an indoor climbing centre. Soon after I entered beautiful Clissold Park with its lakes and Clissold House (with café and toilets). Leaving the park by impressive St Mary's Church the path then follows Church Street, Stoke Newington, for a while before turning left into Abney Park Cemetery. I loved this rather overgrown wilderness with the old gravestones, including the tomb of William Booth, the founder of the Salvation Army and his wife, Catherine. This is now a nature reserve and, judging by the birdsong, a successful one.
Leaving the cemetery, the Capital Ring now turns eastwards through Upper Clapton. Lots of Jewish families were out and about here, all very smartly dressed, the men in religious attire. Soon the path led into another lovely park. Springfield Park is situated above the Lea Valley and, walking downhill through the park I shortly arrived at the River Lee (or Lea?) Navigation. The Capital Ring now joins the Lea Valley Walk in a south-easterly direction for a few miles. At first the path ran between the canal and Walthamstow Marshes Nature Reserve for what seemed an age! Eventually it crossed to the other side as the Old River Lea flows away to the left to eventually rejoin the canal near Hackney Wick. Crossing to the other side again after a lively interlude in Lea Bridge the path now ran between the canal and Hackney Marshes and past Wick Woodland. Lots of canal boats added colour and interest to this part of the walk. After the rather spooky walk under the A102M motorway bridge I approached today’s destination, Hackney Wick, in view of the Olympic Stadium. Hackney Wick is a strange place. There’s a mixture of hip bars and cafés and graffiti covered run-down buildings. Needs a bit more regenerating, I think. Spirits restored I’m already looking forward to returning here for what will be the start of the final leg of this great walk.