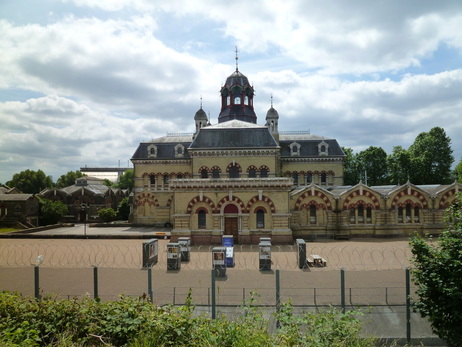 Abbey Mills Pumping Station
Things have calmed down at Euro 2016. All my favourite teams are doing ok. Unfortunately, the same can’t be said about the Referendum campaign. To get away from the depressing politics, I decided to close the circle and finish the Capital Ring.
I followed a different route to Hackney Wick (via Highbury and Islington) and this was definitely quicker than when I returned from there last week. At first the path continued jointly with the Lea Valley Walk along the Lee Navigation, passing Fish Island and the Old Ford Lock. The sun was shining brightly and that has brought out the locals. There are some lively canal side bars/restaurants and an arts centre on the opposite bank. The Olympic Stadium and the Orbit provided a focal point and the tall buildings of Canary Wharf were also visible again in the distance. Shortly after the Old River Lea rejoins the canal, the Capital Ring path leaves the Lea Valley Walk and joins the Jubilee Greenway all the way to Beckton. Interestingly, this path was created on top of sewage pipes – the Northern Outfall Sewage Embankment (also known as NOSE) and is great for cycling. At first the path provides a grandstand view of the Olympic Stadium and the Orbit. I’ve just read that this construction designed by Anish Kapoor has been turned into a giant slide! This part of the walk has brought back great memories of the summer of 2012. I was particularly pleased to find that the wildflower borders, which were such a pleasing part of the Olympic Park, are still in evidence. The stadium itself will soon host Premier League football as West Ham’s new home ground.
Just before the View Tube café, which was created from recycled shipping containers, the path diverts away from the Greenway embankment because of the current Crossrail construction works. I’m not sure I went the right way here but I soon reached Stratford High Street and from there rejoined the Jubilee Greenway. Some walkers may find the next section a bit tedious. The path is straight and broad (great for cycling) but there were enough points of interest (pointed out in Saunders’ guide), and people to watch, to keep boredom at bay. There was yet another eccentric old pumping station to admire, rivers and tidal creeks to be crossed, and a good view of the ‘Shard’. Eventually, the Capital Ring Path left the Jubilee Greenway and turned southwards, soon crossing the busy A13 Newham Way via a footbridge. The walk through Beckton District Park was pleasant and lots of people were enjoying themselves. I made a slight detour here to walk past the lake. The people of Newham Council are obviously take Health and Safety seriously as there was a prominent sign warning of ‘Thin Ice’. After leaving New Beckton Park the path passes through Cyprus Station and East London University to arrive at the Royal Albert Dock. Across the water planes were taking off from City Airport. 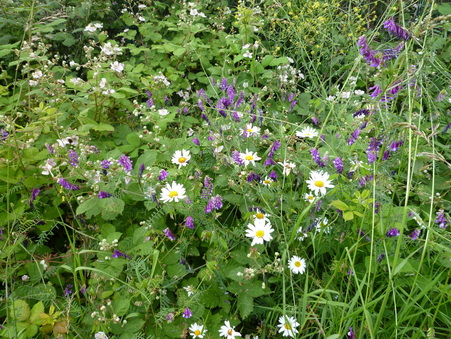 The next section was a little weird. After passing underneath the Sir Steve Redgrave Bridge (carrying the A112) the path moves away from the dock, past the Gallions Hotel, and then follows an empty Atlantis Avenue. The plan was for this road to lead to a new bridge over the Thames but that never happened. As I walked along the deserted street the silence was suddenly broken by the roar of motorcycles. Several bikes were speeding along the road doing wheelies. For the first time since starting the Capital Ring walk I was a quite scared, especially as there was no pavement on my side of the road. The bikers rode up and down the road executing dangerous wheelies. Luckily for me (and I suppose them as well) they managed to stay upright. I was relieved when I reached the end of the road but I couldn’t resist taking a photo. I took a quick snap but as one of the bikers looked straight at me I made a quick get away along the dirt track that led to the Thames.
The path now followed the Thames (Gallions Reach) crossing a couple of locks. Route finding wasn’t straightforward and the area seemed a bit lonely and neglected but I found it quite attractive. Wildflowers thrived along the path. Across the river was Thamesmead with its large apartment blocks. After crossing the second lock I took a wrong turn. I was misled by a Capital Ring sign that pointed to an alternative route leading to the A112. I had to retrace my steps and to my relief found the correct route, which led to the Thames riverside promenade at Galleons Point Estate. I was now rapidly approaching the end of this fascinating walk, just needed to get to the other side of the river! I passed the ferry port and after a while found the entrance to the foot tunnel. I decided not to ‘cheat’ by taking the lift and instead walked down the hundred steps. The tunnel was long and rather spooky. Walking briskly up the steps on the other side I emerged at the point where I started this walk around inner London four months ago. Making my way to the Royal Arsenal Station I felt just a little bit sad that I've reached the end of this walk.