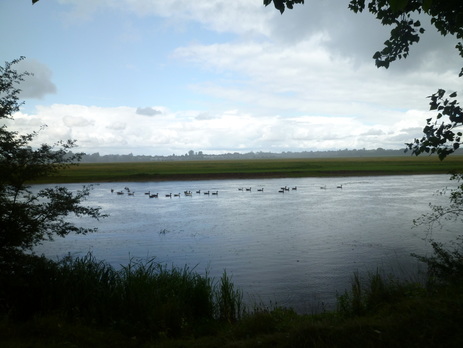 Back on the Thames Path with renewed vigour after a couple of days intermittently tracking participants in the T184 race (running the entire Thames Path in four days (and three nights), encouraging them from the comfort of my sofa to reach the checkpoints before cut-off times, willing them not to give up. A year ago I went through agonies tracking my daughter all the way to the source of the river. It was then that I decided to walk the length of the Thames Path myself (having already done it on Google maps). Now, a year later, I am still walking the path and loving it. Ok, there will be no medal for me at the end, but I haven’t had a single blister nor suffered from sleep deprivation.
Today I set off from Oxford in bright sunshine – just as well as I seemed to have lost my glasses (left on the train?) and my sunglasses had to do. The path out of Oxford was beautiful. At first it led past some terraced cottages with pretty gardens and then through lush greenery, as I left the city behind. Lots of people were out and about, cycling and walking on the path, or canoeing and rowing on the river. A large flock of greylag geese floated gently downstream. Soon I passed a footbridge leading across the river to Port Meadow – an ancient grazing meadow, which, according to my guidebook, has never been ploughed. Perfect for cows but not bad for humans either. This meadow, and the cows, now provided a great backdrop as the rain clouds gathered above, trying (and eventually succeeding) to gain the upper hand over the sunshine. There followed a torrential downpour- it didn’t last long but my cagoule and the tree shelter were no match for it and I was drenched in no time. However, the sun re-emerged and it was quite warm so it didn’t take long to dry out.
I dodged the puddles at Godstow Lock and then wandered around the Godstow Abbey ruins. Just across a road bridge is the historic Trout Inn. The building dates back to 1138 and was then part of Godstow Abbey. More recently the Inn has attracted literary interest as both Collin Dexter (Inspector Morse) and Lewis Carroll mentioned it in their .
The walk now continued, accompanied by the unwelcome noise from the cars speeding along the very busy A34. Passing underneath the road the river headed north, with a paved path short-cutting a couple of bends. I followed the proper signposted path (no shortcuts for me) through the shrubbery alongside the river bends but this seemed to be little used, with low hanging branches, brambles and stingy nettles a hazard. At King’s Lock and Weir, the path turned west and then south-west to Swinford Bridge. This stretch was rural and the only signs of life were a couple of canal boats motoring slowly towards Oxford and a large herd of young cows. I was a little bit weary of passing them as they encroached on the path but was reassured when I noticed another walker not too far behind me. He could rescue me if I was under attack. I never used to worry about cows, having grown up on a farm, but since reading about a couple of attacks I now generally walk swiftly past them and avoid eye contact. However, these cows seemed genuinely friendly and polite, moving out of my way, and I had to say thank you and take a photo.
​        The path then skirted along Wytham Great Wood – if it was sunny and hot I would have really appreciated the lovely shady path but it was cloudy now and damp after the earlier rain. With my sunglasses on it was quite gloomy. Very soon I reached Swinford Lock and Weir. Today’s walk was quite a short and I arrived before 4 o’clock. A boat was in the process of passing through the lock and I tried to be helpful by pulling the lock bar shut. This was hard work and I’m full of admiration for the female lockkeeper who does this all day. I crossed the lock and weir and followed the Wharf Stream Way into Eynsham for the bus back to Oxford.