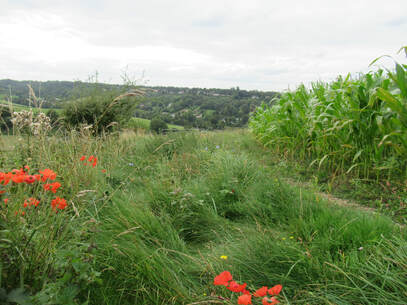 View across to Woldingham
Friday 27 August 2021

At last, after a pause of more than a year and a half, I have returned to the Vanguard Way. It was on a bright November day in 2019 that I started this LDP. The plan was to walk from Croydon to Woldingham station but the afternoon gloom arrived early and I had to make the sensible decision to walk back along the road to Warlington rather than risk getting lost in the middle of nowhere. My plan today was to return to the point where the trail entered the Slines Oak woodland because this was the point where I started enjoying the walk again after enduring a stretch of walking on a very muddy pathy along a field. My plan was to take the bus from Croydon to the Sainsbury's store located near this location. But then, changing trains at Clapham Junction I noticed that  the train would continue after Croydon and stop at Woldingham. So, I started my walk from Woldingham Station and the first part was very enjoyable as I walked along a quiet lane in the valley and then followed a footpath to  to reach Halliloo Valley Road. For a mile or so a footpath ran alongside Woldingham Golf Course. A thick hedge (with blackberries to snack on) shielded me from the road but eventually the footpath turned away from where I wanted to go and I had to walk along the road - there was no broad verge or pavement, so everytime a car came towards me I had to stop walking and make myself small alongside the shrubbery that lined the road. At last I reached the main road (with adjacent footpath) and shortly after I reached the spot where the Vanguard Way makes its way through the Slines Oak woodland. Leaving the woods, the undefined path continues uphill through a large grass field, passing the Nore Hill Chalk Pinnacle. I was distracted in the middle of the field by some unidentified birds and stopped to dig out my binoculars from the bottom of my backpack. In the meantime the birds had all disappeared but as I trained my binoculars towards London, I picked out not only the skyscrapers of Croydon and the Crystal Palace transmitter but also such iconic sights as the Shard and the London Eye - amazing.
After turning right at the end of the field, and joining the Greenwich Meridian Trail, the route led downhill towards Woldingham again and then, after a brief reunion with Slines Oak Road, continued on a bridleway, quite steeply uphill at first between fields, with great views back towards Woldingham and to the green hills on either side. On reaching trees the path broadened and flattened out a bit until it reached the highest point of the Vanguard Way. I guess it will be downhill all the way from here apart from a few bumps, e.g. the South Downs.  After arriving at and crossing Woldingham Road, it was straight downhill through woodland first and then down the steep slope of the National Trust managed Oxted Downs. I rested briefly on a bench where the Vanguard Way and Greenwich Meridian Trail meet and join the North Downs Way. The view from here was stunning despite an eyesore called M25 snaking along the bottom of the valley. 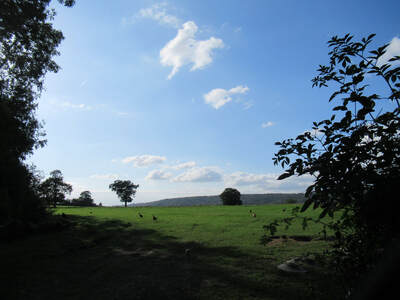 Free Range Pheasants at Broomlands Farm
I was now on familiar territory, enjoying the chalkland flora and walking on the pleasant path to the point (Pitchfork Lane) where the NDW continued left uphill towards Botley Hill whereas the VGW turned right downhill towards the M25. After passing Pitchfork Farm the path continued through several grass fields. Thankfully the warning sign about a bull proved unecessary, and the only farm animals I saw where out of harm's way behind a fence. After crossing the infant River Eden and Titsey Road, another field took me to the side of the M25. Surprisingly, the walk alongside the M25 wasn't anywhere near as bad as might be expected when looking at the map. There was a thick shrub and tree hedge between footpath and motorway and if it wasn't for the noise it would have been easy to forget about the location. I really enjoyed walking along this path. It might have been overgrown but the stingies and other encroachments that appear so often in summer, where cut back recently and there were plenty of blackberries to snack on and nice views across to the North Downs and Titsey Church. Soon after entering a woodland, uphill steps appeared and I've reached the footbridge crossing of the motorway. Now south of the M25 the path headed in a southerly direction along the edge of Titsey Wood. This long track may have been monotonous but I was mesmerised by the hundreds of pheasants that fled into the hedge and wood or ran along the track ahead of me. More and more of these birds appeared until I passed Broomlands Farm (their home).  After continuing walking in the same direction, first between fields and then in Loampit Woods, I reached my destination, the village of Limpsfield Chart, with time to spare before the last bus of the day (18.25) departed for Oxted.  ​
My highlights:Wildlife:Useful information
Transport: Refreshments:​
Click here for more photos from this walk