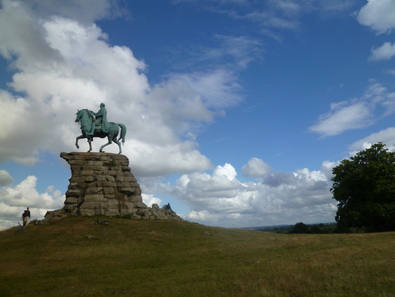 ​          The beautiful weather was too tempting not to go for a walk, even though I also wanted to visit my daughter and new grandson who were allowed home from hospital yesterday. I therefore chose a walk which didn’t involve a long journey and wasn’t too strenuous. That ruled out all the previously started long distance walks. I was contemplating a local ramble but having recently purchased the guide booklet on The Three Castles Path I thought I’d make a start on this trail.
I set off early and arrived in Windsor before 11, sharing the train from Slough with a large group of chattering Chinese tourists. The blue sky framed the castle beautifully and I loved walking through the old streets of Windsor. I soon reached The Long Walk and started walking to the background noise of planes taking off from nearby Heathrow. Modern life also made its presence felt when the path crosses the busy A308. Unlike present day walkers, King John would not have had to worry about traffic when he travelled from Windsor to Odiham and Winchester in the 13th century.
After passing through the gates my attention switched to deer watching. The stags chased after the females, who didn’t seem particularly interested. The grunting was a little intimidating but I'm pleased to say that the bucks were only interested in the female deer and happily ignored human passers-by.
Soon I reached the Copper Horse – a bronze statue of King George the III on horseback, on top of Snow Hill.  From here the views were quite stunning and, on overhearing a father with good eyesight pointing out to his family that he could see the Shard, I grabbed my binoculars and clearly spotted not only the tall buildings of the City of London but also the impressive Wembley Stadium Arch – amazing!
After eating my sandwich, I had to leave this impressive landmark behind and made my way downhill on the grassy path to reach a small woodland and the drained Ox Pond. Then the path continued past Chaplains Lodge on a paved track and at the next crossroads turned into Dukes Lane. The walking here was pleasant, if unspectacular. Lots of cyclists were out and about and I can see the attraction of cycling along these quiet and well-maintained lanes. Dukes Lane is lined with old oak trees, some as old as 250 years.
The path leaves the Great Park by Prince Consort’s Gate and shortly after reaches the busy B383 at Ascot Gate. Here I had a path finding problem. My little guide booklet told me to ‘turn right along grass verge for 60 yards, then cross road to enter, by self-closing ‘Rambler’s gate….’. So I scrambled along the grass verge while trying to locate the gate on the other side of the road. I couldn’t find it and after walking along the uncomfortably lumpy grass verge for perhaps 200 yards I crossed the road and started walking back on the even lumpier verge. I then saw a hole in the thick hedge and wondered if maybe that’s where I’m supposed to go. I climbed in but there was then no way through the thicket. So I scrambled out again, now convinced that I’d never find the path – a depressing thought - but then I spotted the footpath sign exactly opposite Ascot Gate!  Obviously there has been an improvement made to the path since the booklet was issued (1998). A bit annoying that I didn’t spot the sign earlier as the wasted time made catching the 3.15 pm bus from Ascot look less likely. I decided to go for it nonetheless and made good progress through Sunninghill Park (Prince Andrew's home). My earlier plan to make a short detour to the Great Pond for a short break was shelved and I soon arrived in Ascot. I passed the Golden Gates and then a hedged path along the old Straight Mile race course leads to the A330 Winkfield Road. Here I left the Three Castles Path to make my way to Ascot Railway Station. On the High Street there were large signs pointing left for trains to London and right for trains to Reading. Obviously, I turned right but then I reached a locked gate saying that the footpath is open on race days only! Annoyingly I now had to go back down the High Street and, predictably, the 3.15 pm rail replacement bus passed me as I walked along Station Road. I’d missed it by five minutes!
So, that concludes the first section of this new path. It did not all go exactly to plan but then I approach each walk as an adventure which may have the odd difficulty or irritation. The Three Castles Path is not signposted as it uses existing footpaths and rights of way. I didn’t bring along a map today but will take one for the next section, just in case I lose my way ….. .