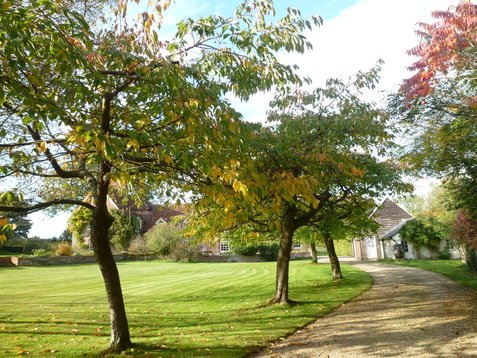 After a busy week I was looking forward to a free Saturday. With a promise by the weathermen of sunshine after a misty start, i.e. a perfect autumn day, I set off to continue the Wayfarers Walk. I made an early start in the hope of reaching Kingsclere by 11 o’clock. I’d planned the travel meticulously, train to Basingstoke and connecting bus to Highclere.  However, my plans were thrown up in the air because of a broken-down train. In the past that may have upset my day but I have acquired the commuter’s shrug of the shoulders to travel disruptions. I did consider cancelling the trip, or maybe have a day out in London. However, I’d bought the ticket to Basingstoke, my backpack contained the ‘Basingstoke, Alton and Whitchurch’ Ordnance Survey map, and I was wearing my walking boots. So, I followed the advice by the station announcer and travelled to Basingstoke via Guildford and Woking and eventually arrived in Basingstoke two hours later than planned. It was still cold and grey however, and I was wondering whether I made the right decision. Thankfully, the Link bus was punctual and didn’t let me down. That raised my spirits and when I arrived in Kingsclere the sun started to break through the mist and as soon as I started walking I knew that I made the right decision.
I found the footpath out of Kingsclere, walking through the recreation ground and then between gallops to reach the steep hill of Freemantle Park Down. It was not long before I reached the Wayfarer’s Walk at the exact place where I left it back in the summer. Because of the delayed start it was already time for lunch and, in order to make up lost time, I ate my sandwich while walking along the path which led slightly uphill through a field. I turned around every now and again to enjoy the wonderful view back towards The Warren and Watership Down. The mixture of cloud and sunshine made for constantly changing scenery. After traversing open down-land, the walk then continued along a hedged path, buzzing with insects and bumblebees in the warm sunshine, and led to a road (an old Roman Road). The path continued across the road and followed the track past a menagerie of geese and sheep to reach Walkeridge Farm, where I also spotted a peacock.
The path continued pleasantly southwards along a tree-lined track before turning left along a road to reach North Oakley, a small hamlet with an impressive manor house. At Freemantle Farm I had a slightly scary dog incident, i.e. three dogs (one large and two small) came charging at me – luckily they were not aggressive, just excitable, and, as usual, the owner apologised. 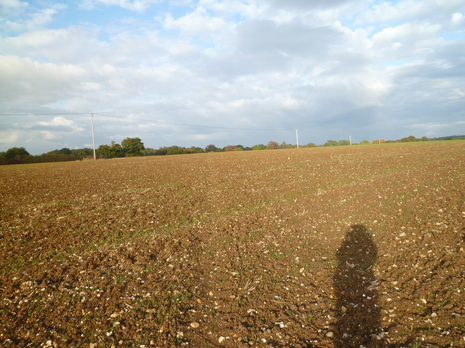 Just about detectable path
For the next couple of miles I did not see another human being. The path continued along and through woodland. I saw a few pheasants and was slightly concerned about the shooting I heard in the distance. Autumn is hunting season and I wondered whether the pheasants were hiding from hunters. I told myself that I was perfectly safe on a public footpath.
Eventually the path veered away from the track to carry on diagonally across a field. There was a bit of guess work involved as the path was obscured by an unidentified crop (cabbage?). I always enjoy walking through an arable field – keeps me in touch with food production! The farmer is probably less thrilled to have people traipsing through his field but it is great that the ancient rights of way are being upheld.
After crossing a meadow and passing a couple of horses as the path led through their enclosure, I reached Deane Down Farm. The farm was a welcome distraction from the extensive arable farmland. I crossed a rail track and then a couple more large fields before arriving at the pretty village of Deane with its manor house and thatched cottages.
The sun was slowly setting as I walked on a slight uphill track. There were some nice views of shrubs and copses in autumnal colours, which took my mind off the pain around my ankles I’ve been feeling since Deane. It appears that my newish boots on their first long walk need a bit more getting used to. After loosening the laces a bit I decided to walk quickly as far as Bulls Bushes Copse, the path’s nearest point to Oakley. Because of the late start this morning it was getting dark when I arrived in Oakley. I was pleased to find a bench to rest my weary feet while waiting for the bus. It arrived at the scheduled time and the journey home was thankfully straightforward with none of the morning’s problems. Wonder where the next leg will take me?