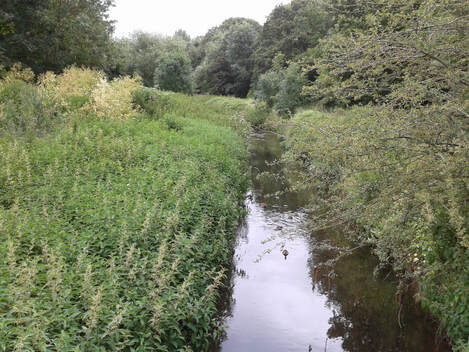 This is the final leg of the London LOOP and as it is a long one, I needed the long daylight hours which are, of course, available in early July. Travel to Harold Wood was fairly straightforward but lengthy, involving bike, train, underground and TFL overground. After locating my sense of direction (took a while) I was back on the LOOP, leaving the residential streets of Harold Wood and continuing through Harold Wood Park and the community woodland of Pages Wood in the Inglebourne Valley. It was a lonely walk – just one jogger and a dog walker crossed my path in the next few miles. That was in contrast to the number of cars whizzing along Hall Lane - a road I soon had to follow across the A127 (on a bridge) and into the Hornchurch suburbs.  I was pleased when at last a narrow footpath led into woods and dropped down to the river Ingrebourne. However, that joy was tempered by the stingy nettles and brambles that at times threatened to make the path impassable. I did make it down to the tiny river with just a few scratches and stings and was happy to leave the woods to continue the walk along the edges of a couple of large fields of nearly ripe barley. There was a real rural feel to this part of the walk, rather unexpected in this otherwise densely populated part of Greater London (or is it Essex?). Leaving the fields, I arrived back in Hornchurch – or to be more precise the Upminster Bridge area, where I stopped for a coffee.
Shortly after leaving Hornchurch by Hornchurch AFC’s ground I was reunited with the now slightly larger Ingrebourne River as the trail continued along Gaynes Parkway. Whereas the walk so far has been largely forgettable, it soon got much more enjoyable as it followed the Ingrebourne Valley Green Way through a local nature reserve and then into the fascinating Hornchurch Country Park. The park has it all - woodlands that are part of the Thames Chase Community Forest, a children’s adventure playground, community outdoor gym and, a highlight for nature lovers, lakes and reed swamps. During wet weather in winter this area can fill with water and form the largest freshwater marsh in London. Today there were just a couple of small lakes but these still attracted large numbers of all kind of birds and the Visitor Centre and café (run by the Essex Wildlife Trust) was a popular place. The centre also had a shop and educational facilities; not forgetting an exhibition remembering RAF Hornchurch’s history. They were stationed here during World Wars I and II to protect London. After indulging in an ice cream and a bit of birdwatching I had to tear myself away and was surprised to see a police car with flashing blue lights in this idyllic place. It soon became clear by a plume of smoke that a fire had broken out nearby. Rather concerningly, it was in the direction of my path. I walked, at a distance a little too close for comfort, past the fire where fire services were working hard to extinguish the flames. I couldn’t resist taking a photo before walking on quickly to leave the area, and was pleased when I could no longer smell the smoke. By the time I reached the lake at Albyns Farm I could once more enjoy the walk. A gentle uphill stretch led over Ingrebourne Hill, from where I enjoyed some great views towards Rainham and as far as Docklands and the city of London. It’s great to see how nature can quickly reclaim land, given half a chance. That chance was given when a Forest Park was created at the location of former gravel extraction works. Man-made Ingrebourne Hill is now a pleasant place to visit or walk through.

View across the Thames to Erith
​          At Rainham, after negotiating a stretch of tarmac walking and crossing busy roads, I wandered into Rainham Creek Park for some lush greenness and then walked around the church and the beautiful gardens of Rainham Hall, a NT property now. Sadly, the café was just closing. In any case it was time to get going again. After leaving Rainham by the train station and crossing over the Channel Tunnel rail tracks and soon after under the busy A13 I arrived in Rainham Marshes. The walk through the tall grass on a good path was quite nice. However, looking back and checking the map I think I may have missed a turn somewhere. Perhaps my straying off the loop wasn’t a bad thing as, according to the guidebook, the LOOP led past industrial buildings and a rice plant whereas I had nature! I did however feel slightly uneasy walking on the lonely path – after all I’ve read Dickens’ descriptions of spooky marshes hiding fugitives! I’m pleased to report that eventually the track turned right and I emerged unscathed at the riverside path.
Soon I could see Erith on the other side of the wide river where I started the LOOP in 2016. I remembered a muddy Thames – today the tide was in and the river looked magnificent. The sun was also now making an appearance- it’s been mostly cloudy so far – and that brought butterflies, bees and birds to life, making the walking a pleasure. Arriving at the RSPB visitor centre at the Rainham Marshes Reserve I promised myself to return here one day, when it is open, for some birdwatching! Soon I arrived at Purfleet, the official end of the LOOP. I celebrated with a lemonade at the faded Royal Hotel and reflected on the completion of what has been a long walk with plenty of ups and a few downs.
My HighlightsWildlife:Useful information
Transport:  Refreshments:
Click here for more photos from this walk